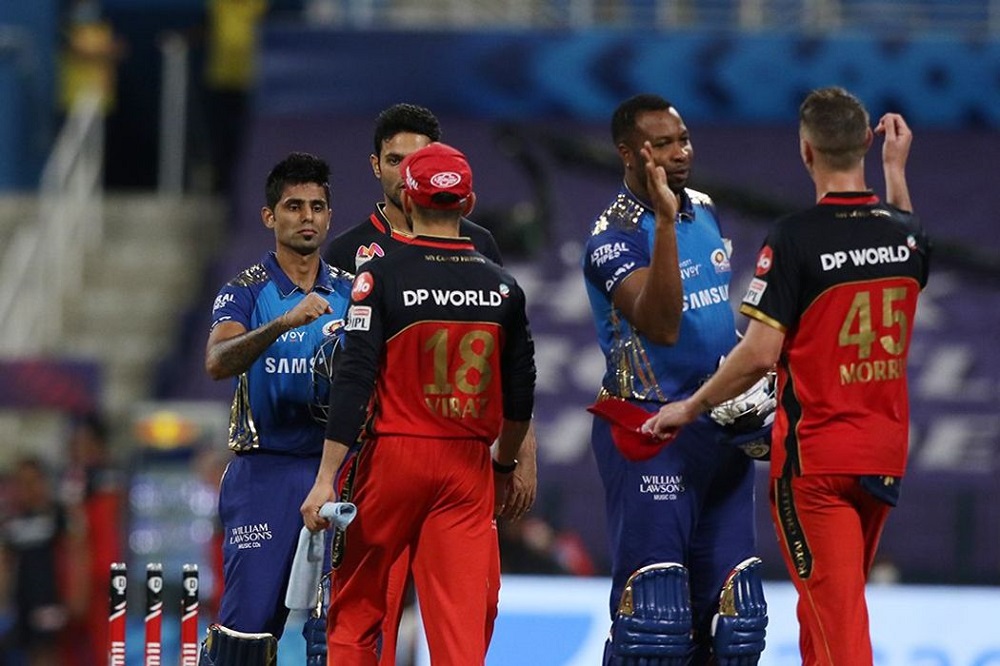 Mumbai Indians can become the first team to qualify for the playoffs if CSK defeat KKR.

We are now in the last few matches of IPL 2020. It has been a completely thrilling and never seen before campaign for each and every team. Not only did we get to see some interesting matches but many players and teams laid down new records in the history of IPL. So, it was time for another such fixture as Mumbai Indians were going up against Royal Challengers Bangalore. Both the teams had won 7 matches and were tied at 14 points. So, this match would decide which of the two would move a step closer to qualifying for the playoffs. Both, RCB and MI had enjoyed a good start to the tournament. However, they had lost their previous match to CSK and RR respectively as they were denied from sealing their spot in the Top 4.

Mumbai Indians won the toss and their interim skipper Keiron Pollard opted to bowl first. However, they did not get a great start as the RCB opening pair, Devdutt Padikkal and Josh Philippe thrashed the MI bowlers 54 runs in the powerplay itself. The duo continued the beating until the 8th over when Philippe (33 in 24) got out. As a result, Virat Kohli came in at 3. But, soon enough in the 12th over Kohli (9 in 14) also got dismissed. Then came AB de Villiers (15 in 12) who became a victim to the MI captain Pollard’s spell. It seemed like the RCB batting lineup was just collapsing in front of MI’s bowling attack.

In the 17th over, Jasprit Bumrah again struck as he dismissed Shivam Dube (2 in 6) and Padikkal (74 in 45) to leave RCB hanging at 134-5. Then came Chris Morris who was the last hope for the RCB fans. However, the South-African bowler also failed to deliver and lost his wicket to Trent Boult after scoring 4 in 2. But, in the end, Gurkeerat Singh Mann (14* in 11) and Washington Sundar (10* in 6) still managed to take RCB’s total to 164-6 in their 20-over innings. Now, Mumbai Indians needed to chase 165 runs if they wanted to maintain their position at the top of the points table.

Quinton de Kock and Ishan Kishan opened the innings for MI just like the previous match and they got MI to a great start. However, Mohammed Siraj dismissed De Kock (18 in 19) in the 6th over to give RCB a breakthrough. So, Suryakumar Yadav came to the crease to support Kishan. However, in the 8th over, Kishan (25 in 19) also got out. As a result, Saurabh Tiwary came to the crease but he also got out in the 11th over. The MI batsmen were just going down one after the other as RCB seemed to be dominating the match. However, Surykumar Yadav had completely different plans.

After Tiwary’s dismissal, Pollard sent in Krunal Pandya before the latter’s brother Hardik. Krunal (10 in 10) smashed a four to prove his skipper right but soon got out in the 14th over. However, this did not affect Yadav who continued hitting boundaries without any worries. After that, Hardik came and thrashed two sixes to give MI a ray of hope. Then, in the 19th over Hardik (17 in 15) also got out but the MI captain, Pollard (4* in 1) came and immediately smashed a four to take the chase to 3 required off 6 balls. Yadav (79* in 43) immediately hit a four and did a ‘Main Hoon Na’ celebration while looking towards his teammates. MI had won the match with 5 wickets in hand and 5 balls to spare.

That's that from Match 48 as @mipaltan win by 5 wickets.@surya_14kumar with an unbeaten 79.

Suryakumar Yadav won the Man of the Match award for his match-winning knock of 79* in just 43 balls. The 30-year old batsman had proven the Indian selectors wrong for not picking him up for the Australian series coming after IPL. Many cricketers took it to their social media to congratulate Yadav and appreciate his unbeaten innings. Besides Yadav, it was also a special match for Jasprit Bumrah who completed his 100 wickets in the IPL. The death-over specialist indeed made it memorable his 100th wicket was the same as his 1st wicket i.e. of Virat Kohli.

Anyhow, now MI has got a 2-point lead in the points table over RCB and DC with a huge difference in net-run rate also. Now, MI can directly qualify if CSK defeat KKR or else they’ll have to win another match which will see them going through to Qualifier 1 directly. On the other hand, RCB now has 2 matches remaining, and getting a victory in any of them will help them qualify for the playoffs most probably. So, MI will now be facing DC in their next match whereas RCB will be up against SRH.