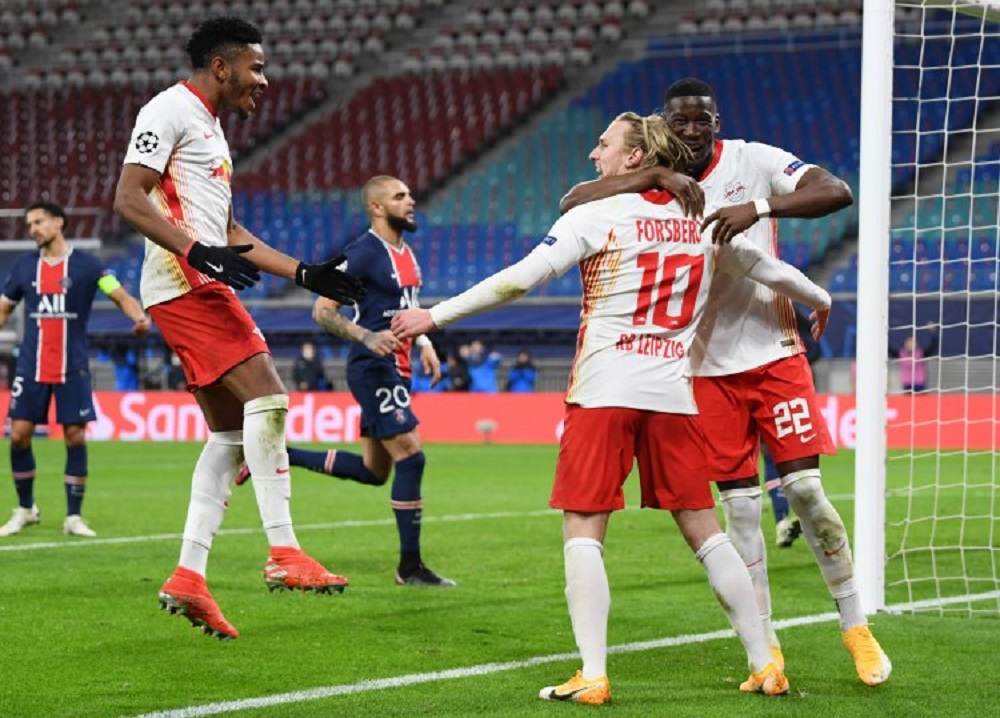 Emil Forsberg celebrates with teammates after scoring the winning goal for his team in their third UCL clash.

The UEFA Champions League is the biggest European tournament and all the clubs are doing their best to move one step closer to the title. The Group stages have already started and this time things have been very different. No match is predictable as all the teams are playing extremely well. Hence, the competition has become even more interesting. Group H is one of the most interesting groups this season. It consists of teams like RB Leipzig, Manchester United, Paris Saint-Germain, and Istanbul Basaksehir. On 4th November, Manchester United who won both of their first two matches was facing Istanbul Basaksehir, who had lost both matches until now. Surprisingly, Istanbul defeated Manchester United and brought home 3 points.

The next match was between Paris Saint-Germain and RB Leipzig. Both of them had won only one out of their first two games. Whichever team would win this game, they were going to have a good advantage in the points table. Both of them performed very well last season as Paris reached the finals of the Champions League whereas RB Leipzig made it to the semi-finals. Both the teams had met before in the semifinals of last season’s Champions League where PSG had moved ahead with an easy 3-0 win. However, this time things were very much different for Paris as Marco Veratti, Mauro Icardi, Neymar Jr, Kylian Mbappe, and Leandro Paredes were all injured. As a result, they could not make it to the lineup. Leipzig, on the other hand, also made big changes in their team who lost to Monchengladbach last time.

The match kicked off and just under 6 minutes, Paris scored their first goal. A good pressure from Moise Kean led Upamecano to make an error. Kean kept a low through ball to Di Maria who calmly scored against Gulacsi. Now, RB Leipzig was under a lot of pressure and they almost scored an equalizer just two minutes after conceding but a wonderful save from Navas helped PSG to maintain the lead. Soon, in the 15th minute, PSG won a penalty after an attempt from Kean hit Upamecano’s arms inside the box. However, Di Maria missed the penalty and lost the chance to make it 2-0. Both the teams had good possession but 4 minutes before halftime the former Paris player, Christopher Nkunku scored the equalizer. As a result, the score at halftime was 1-1.

In the second half, PSG struggled as it looked like the players were exhausted after the first half. Kimpembe made the same mistake that he did 2 years ago against Manchester United by exposing his hand inside the box. Angelino tried to keep a ball to Forsberg who was not able to collect it. However, the ball eventually hit Kimpembe’s hand. The referee did not award a penalty at first but then changed his decision after the VAR check. Forsberg scored the penalty and made it 2-1 for Leipzig. After this, Gueye and Kimpembe both received red cards in the 69th and 95th minute. As a result, they will be missing the next match as PSG prepare for their clash against Leipzig once again on matchday 4. For now, Leipzig earned the three points from a glorious victory and is now 2nd in the group.