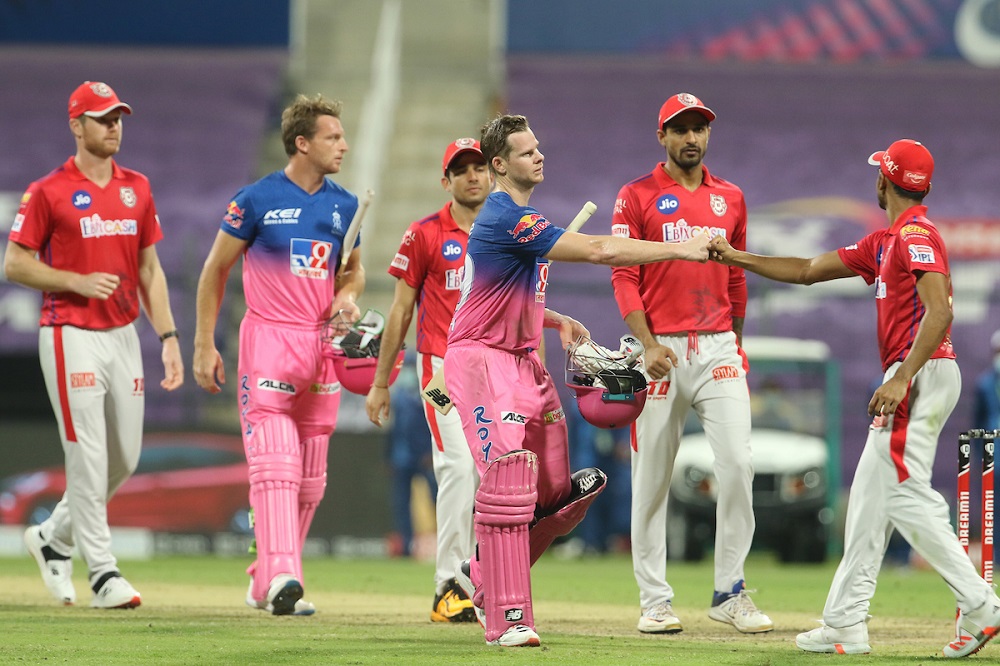 IPL has been fully action-packed this year. Just like in the year 2020, we have seen many ups and downs in this, which is one of the biggest cricket tournaments in the world. We got to see three super-overs, a double-superover, and back to back centuries from an Indian player (Shikhar Dhawan). So, it was time for another thrilling match as Rajasthan Royals were all set to go up against Kings XI Punjab. It was a chance for KXIP to have an edge over KKR who had just lost to CSK.  On the other hand, RR had to win this match if they wanted to keep their hopes of qualifying for the playoffs alive. As a result, both the teams were fully prepared and determined to take on the challenge.

Rajasthan Royals won the toss and their skipper Steven Smith chose to bowl first. This decision turned out to be quite good for them as they were able to get a wicket in the first over itself. Jofra Archer struck to dismiss Mandeep Singh (0 in 1). However, KXIP were not worried as Chris Gayle and KL Rahul, their best striking duo were on the crease. The two played excellently as they built a whopping partnership of 120 runs in just 82 balls. Both of them were smashing the RR bowlers before Ben Stokes got RR breakthrough after dismissing KL Rahul (46 in 41). However, this did not stop Chris Gayle who continued thrashing the RR bowlers.

After Rahul’s dismissal, Nicholas Pooran came to the crease. However, Pooran also soon got out in the 18th over after hammering 22 runs in just 10 balls. However, unlucky for Chris Gayle, the West Indies batsman got out in the 20th over at a score of 99 runs in just 63 balls. He was pretty disappointed with his dismissal as he threw his bat on the ground in frustration. However, Maxwell (6 in 6) and Hooda (1 in 1) hit 7 runs off the last 7 balls to help KXIP reach a total of 185-4 in their 20-over innings. This wasn’t a huge total but KXIP’s bowling could give some difficulty to RR chasing this target.

Rajasthan Royals needed 186 runs in just 20 overs. As a result, they sent their best opening pair, Robin Uthappa and Ben Stokes. The duo gave just the start that their team needed as they smashed 66 runs in the powerplay after the loss of 1 wicket of Ben Stokes (50 in 26). Soon, Uthappa also got out in the 11th over after hitting 30 runs in 23 balls. Now, all of the fans’ hopes were rested on Sanju Samson and Steven Smith who hit 48 in 25 and 31* in 20 to guide their team to victory. Jos Buttler also chipped in 22* runs in 11 balls to beat KXIP by 7 wickets. RR had defeated KXIP within just 17.3 overs.  This was a huge victory and the team was celebrating it happily.

An all-round performance by @benstokes38 as he bags the Man of the Match award for Match 50 of #Dream11IPL pic.twitter.com/fDIt4PJrIC

Ben Stokes won the Man of the Match award for his excellent all-round performance. He hit 50 runs in just 26 balls and took 2 wickets in his 4-over spell after giving away 32 runs. He had proven the reason why RR had selected him. With this victory, RR had moved to 12 points on the points table and needed a big win against KKR in their upcoming match if they want to qualify. On the other hand, KXIP will be going up against the already eliminated CSK to secure their spot in the Top 4. Both of them also need to improve their net run-rate if they want to keep their chances of qualifying high. In the end, IPL 2020 has all come down to the final league stage matches.