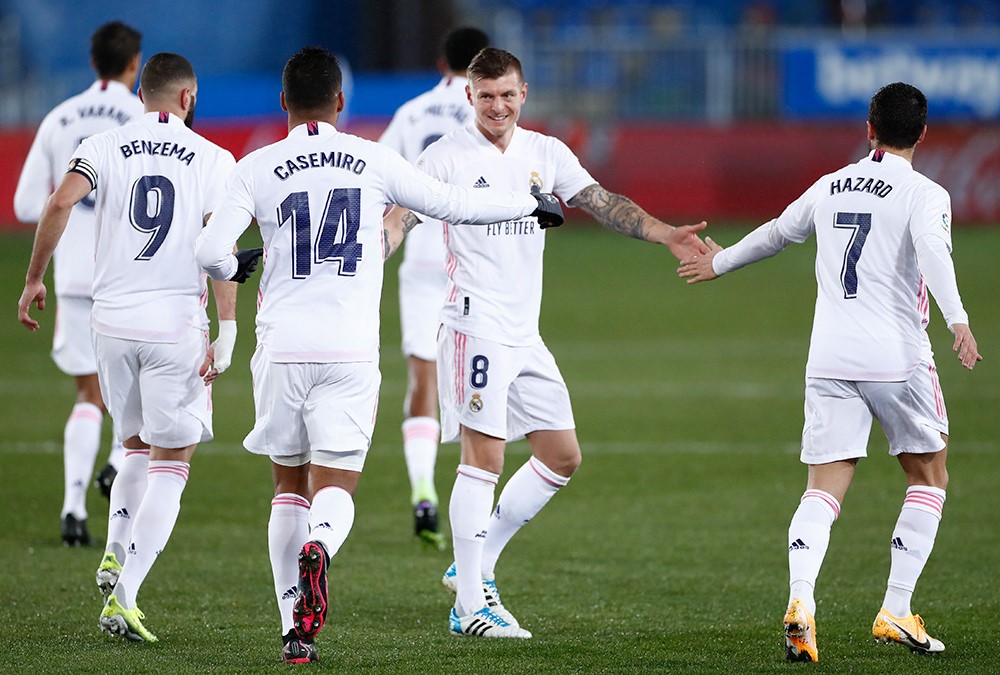 Alaves hosted Real Madrid to play the 20th fixture of La Liga at the Mendizorroza stadium. Zinedine Zidane’s side was determined to bounce back at the first opportunity after crashing out of the Copa del Rey mid-week to the third division side Alcoyano. They had now lost their last two games in all competitions. Although their result in the league was better, they had gone eight games without defeat in La Liga.

On the contrary, Alaves had failed to win any of their last four games in the league, but they would definitely try to take advantage of Zidane’s absence as the Frenchman tested positive for COVID-19 earlier this week. Alaves was unchanged after their 2-1 defeat to Sevilla last time out. On the other hand, Real Madrid recalled Courtois, Varane, Mendy, Kroos, Asensio, Benzema, and Hazard after their shocking defeat to Alcoyano. As a result, the game was going to be really interesting as both the were teams looking forward to climb up the points table.

The first half began as the home side made a positive start so far and, Real Madrid was forced to clean their lines quickly. Alaves was trying to get into Madrid’s box early, they were flying into tackles, and the longer that went on, the more unsettled the visitors became. After the 12th minute, Real Madrid started to find their rhythm. Modric was going for a goal but the former Tottenham ace saw his shot fly over the crossbar. Real Madrid finally got the lead in the 15th minute of the game. The pressure proved too much for Alaves and they fell behind after Casemiro’s header found the bottom corner. The midfielder wrestled free from his marker from the corner and Pacheco had no chance of stopping that.

That goal gave Real Madrid a real morale boost and their players looked rejuvenated as if the shackles were off. Alaves had lost their way a little and it seemed like they needed half time to regroup. They were struggling to win the ball back but a second goal was not too far away for Real Madrid. Consequently, Benzema fired Madrid into a 2-0 lead. He received the ball after a backheel pass from Hazard. Alaves’ defense was slow to apply pressure and Benzema punished them with a powerful shot into the top corner.

Real Madrid deserved their lead and they still had time to grab a third before the break. In the injury time of the first half, Alaves was punished after they tried to play the offside trap and it went wrong disastrously. The defense moved forward in different stages and that allowed Hazard to race onto Kroos’ pass. Hazard looked up and fired the ball past Pacheco who was helpless in the Alaves goal. At the end of the first half, the score was 3-0 in Real Madrid’s favor.

The second half began as the hosts made 3 changes at the break. The manager was hoping for a quick response as his side was trying to get back into the match. In the 59th minute of the game, Militao conceded a freekick. Consequently, Joselu beat Real Madrid in the air and Alaves had their first goal of the game. He placed his header perfectly from Perez’s cross leaving Courtois no chance in the Madrid goal. It seemed that there was a lot of anger on the field of play and that did work in Alaves’ favor as they tried to rescue a draw.

In the 70th minute, Benzema delivered the goods once again for Zidane’s men. Consequently. that was three points in the bag for the Los Blancos. He managed to stay onside after hugging the touchline with Modric, the man to spot him. A quick through-ball and Benzema did the rest. Now, Real Madrid just had to maintain good possession of the ball. They did that well and managed to keep the scores the same till the end of the second half. The referee brought the crazy game to an end and with that, the defending champions extended their unbeaten run in the league to nine matches. Alaves will be worried as they sit just one point above the relegation zone in the points table. Apart from that, the bottom two teams have played fewer matches.