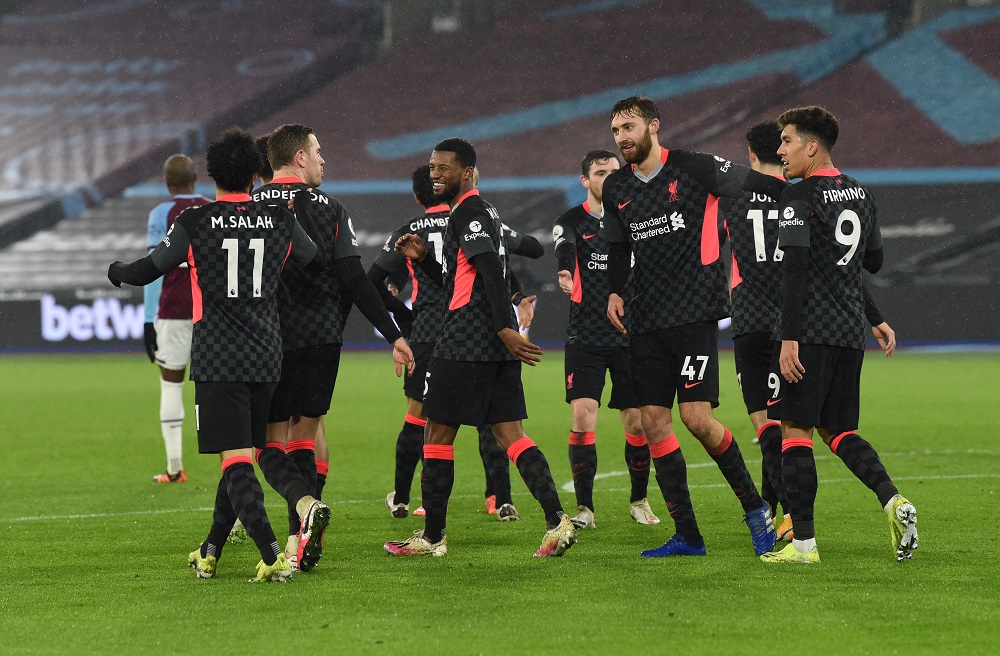 Liverpool defeat West Ham to climb back to the Top 3 in the Premier League points table.

West Ham hosted Liverpool at the London Stadium for their 21st fixture of this season. It was going to be an interesting battle as both the teams were almost neck to neck in the Premier League points table. Liverpool was in the 4th position whereas West Ham was just below them in the 5th place. The Reds had won 10 games, drawn 7, and lost 3 until now. On the other hand, the hosts had won 10 games, drawn 5, and lost 5 to date. If they would win this match, they could go to the 4th position and replace Liverpool. Contrarily, the defending champions could go to the 3rd position above Leicester CIty with a victory in this game. As a result, this clash was going to be really exciting and thrilling.

The match began as West Ham kicked off and the hosts were looking to create pressure from the beginning. They tried to keep the possession to themselves and create chances but the pressure from the visitors was just too much. Soon enough, West Ham gave away the possession and now Liverpool was dictating the game. They created some good chances in the first half but failed to convert any of them.

On the other hand, West Ham were also doing good as they did get a few shots at goal. However, they were denied time and again by the Liverpool defense and goalkeeper. In the final minutes of the first half, Liverpool had a great chance as Thiago put in a through ball for Origi but the latter failed to reach the ball quickly and kicked it outside for a goal-kick. With that, the first half came to an end as the match was still at a goalless impasse.

The second half began and now both the teams were looking more confident than before. However, it seemed like the visitors were the more desperate ones for a goal. Consequently, they got it in the 57 minute as Mohammed Salah got his name on the scoresheet. Curtis Jones came in as a substitute for James Milner and made an immediate impact as he assisted the goal. Salah dribbled past Cresswell and curled the ball into the far corner with his left foot. Just like that, Liverpool was now leading by a goal.

The game continued and it seemed like Salah was hungry for more goals. Just 11 minutes after scoring, the Egyptian struck once again to double the lead for the visitors. Liverpool broke on the counter and Shaqiri put a brilliant cross inside the box for Salah. The latter controlled it with his first touch through his right-foot and then pushed it into the left side of the goal past Fabianski.

Even then, Liverpool continued their search for goals and they were completely dominating West Ham in terms of possession or number of chances created. Just when West Ham must have thought that the game is coming to an end, Georginio Wijnaldum scored an easy tap-in to triple his side’s lead. It was a great goal as Liverpool passed the ball around near the box. Finally, Firmino passed the ball to Wijnaldum who finished the move.

Consequently, it seemed like the Reds had sealed the victory but West Ham still won themselves some consolation as Craig Dawson scored a goal in the 87th minute. It was from a corner taken, on which Robertson managed to get a flick. However, the ball went straight to Dawson whom the Liverpool defenders left completely unmarked. He tapped the ball in easily with his right foot as the match ended with a score of 3-1.

West Ham was definitely disappointed with this result as they had a chance to leave their neck to neck rivals behind. On the other hand, Liverpool was thrilled for getting back into the Top 3 in the points table. They are now just a point behind Manchester United who is in the 2nd position. Anyhow, both the teams will now be preparing for their upcoming league games. West Ham will be facing Aston Villa whereas Liverpool will be going up against Brighton.