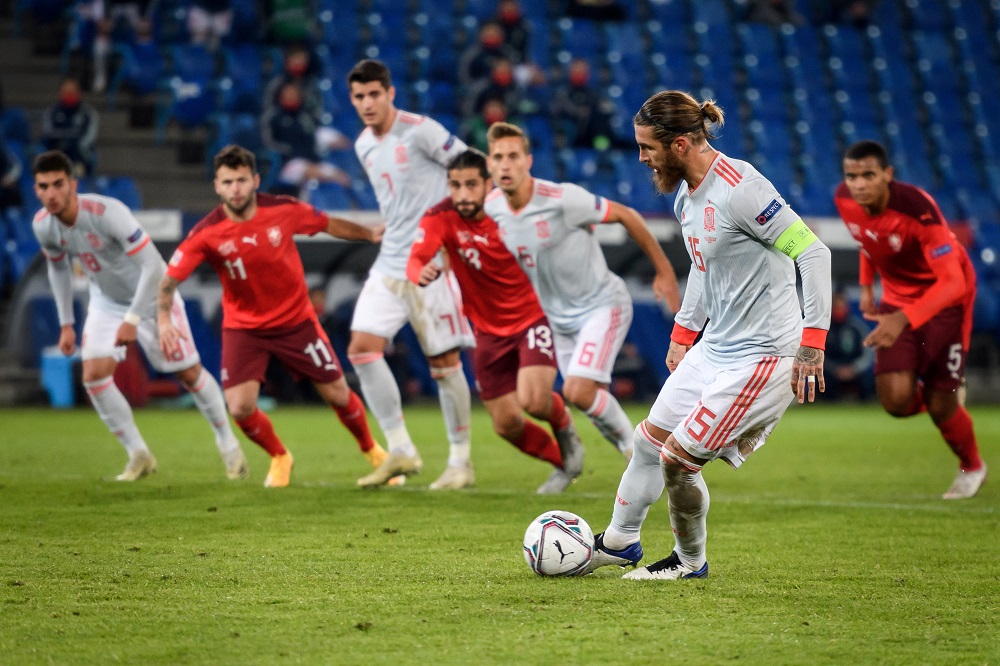 A still of Sergio Ramos shooting from the spot during a penalty.

The UEFA Nations League is back with its amazing fixtures as the international break is back. As a result, we will get to see some amazing fixtures once again. We are in the final stages of the league phase. So, it was time for matchday 5 of the Nations League. France won the match against Portugal to seal their position in the final 4. Now, it was time for Spain to lock heads with Switzerland as the former could increase their chances of qualifying for the final 4 with a win in this match. Switzerland, on the other hand, was already out, so this match was like an opportunity to spoil the Spain national football team’s party. So, let us see what happened in the match.

The match began as Switzerland kicked off. Spain was highly pressing the Switzerland players and as soon as they got the ball were maintaining good possession. In fact, in the 6th minute of the game, Spain had a great chance as Ferran Torres dashed down the right flank and kept in a good ball for Olmo. However, Olmo’s shot took a deflection from the Switzerland defender and went wide off the right post. Just like that, the Spanish players went on to create chance after chance but were not able to convert any of those.

However, their opponents i.e. Switzerland made no mistake in converting the opportunity as soon as they got one. In the 26th minute, E. Fernandes kept a through ball to Embolo who sprinted down the right flank. He crossed the ball into the box as Freuler came in and shot the ball into the top right corner of the net. The Spanish goalkeeper did not even have a chance to save this as the shot went in perfectly. As a result, Switzerland were now leading with 1 goal. However, it did not seem like Spain had lost their confidence as they continued playing their game calmly and with composure. But, due to lack of finishing, the score at halftime was 1-0 in Switzerland’s favor.

The second half began and Spain kicked off now. The Spanish side seemed to be even more confident now as they were hungry for goals. They needed at least one to draw and two to win the game. They were keeping complete possession of the ball and Switzerland seemed okay with that as they just wanted to defend their 1-goal lead now. However, Spain tried to create chances but were again not able to convert any of them. In fact, in the 54th minute, Switzerland got a great chance but Ramos made a brilliant interception to keep the score as 1-0 only.

Anyhow, the skipper was only able to deliver that much as he went on to miss 2 penalties in the 55th and 80th minute respectively. In the 55th minute, Spain got a penalty for a handball inside the box whereas in the 79th minute, the referee awarded Spain a penalty for a foul committed by Nico Elvedi inside the box. In fact, the referee also showed him his second yellow of the game and he was sent off the pitch. However, that was not it as in the 89th minute, Gerard Moreno scored the equalizer for Spain. It was a good positioning after Reguilon assisted him from the left wing. As a result, the match ended in a 1-1 draw and both the teams got 1 point each.

With the draw, Spain moved down to the 2nd position in the points table. Switzerland, on the other hand, maintained their position at the bottom of the table. This match was very crucial and might even push Spain out of the final 4 of the UEFA Nations League. Now, their next match is going to be the decider as they will be going up against Germany whereas Switzerland will be up against Ukraine. So, it is going to be an extremely thrilling and nerve-wracking match as we will get to see who will make it to the final 4.