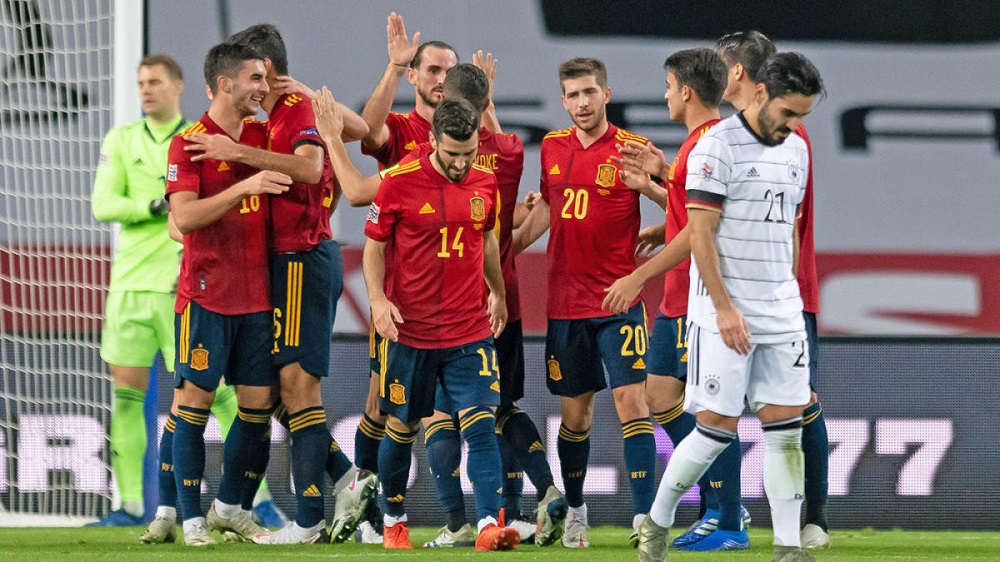 Spain destroyed Germany by a score of 6-0 to qualify for the Final 4 of the UEFA Nations League.

The international break got over two days ago and it didn’t fail to entertain us just like club football. We got to see some really interesting and nerve-wracking fixtures. There were nail-biting close matches as well as complete one-sided matches. However, the match that caught everyone’s eyes was Spain vs Germany. Both the teams were from group A and a win in this match would send Spain to the next stage whereas for Germany even a draw would do. The former was in the 2nd position with 11 points whereas the latter was at the top with 9 points. As a result, it was going to be a really thrilling match as the two would give it all to qualify for the final 4. So, let us see what happened during the match.

The match started as Germany kicked off on the referee’s whistle. However, Spain put really good pressure on their opponents to steal the ball from them. After that, they also maintained good possession of the ball to no lose it back to Germany. In the 5th minute, Spain got their first big opportunity as Olmo was fouled just outside the box. So, Sergio Ramos took the freekick but Manuel Neuer made a brilliant save to deny Spain. However, the latter did not stop pressing and kept creating chances. Finally, in the 17th minute, Morata headed the ball into the goal to give his side a 1-0 lead. He headed the ball past the German goalkeeper after a corner from Fabian Ruiz.

In the 33rd minute, Spain struck again as Ferran Torres put his name on the scoresheet. After a deflection from the crossbar, Torres took a great volley to smash the ball into the left corner of the goal. As a result, he doubled the lead for his side. Just 5 minutes later, Rodri tripled that lead as he headed the ball past Neuer once again with a corner from Fabian Ruiz. With that, the score at the end of the first half was 3-0 in Spain’s favor. Even though it was the last goal of the first half, Spain was completely dominating Germany.

The second half began and it felt like Germany had no hopes now. Spain was ruling in possession, attempts, shots on target and Germany was just clueless about what to do. As a result, 10 minutes into the second half, Torres scored his second goal of the game after an outstanding assist from Jose Gaya. However, that was not it for the 20-year-old youngster. In the 71st minute, he completed his hat-trick to make the score 5-0. The German defense was nowhere to be seen and Spain was taking complete advantage of it. Finally, in the 77th minute, Germany got their first chance as Gnabry dashed with the ball towards the Spain goal. He smashed the ball but unfortunately, it hit the crossbar.

However, that was not enough for Spain. In the 89th minute, Mikel Oyarzabal put the final nail on Germany’s coffin as he scored the sixth goal for his side. Jose Gaya dashed past the left flank and after reaching near the goal he passed the ball to Mikel. As a result, Spain had completely humiliated Germany in a 6-0 victory as they sealed their spot in the Final 4 of the UEFA Nations League. On the other hand, Germany had been knocked out after reaching so close. Even after being at the top of the points table at the beginning of the match, they finished at the 2nd position in the points table. This will surely go down as the biggest victory for German in the history of football. Anyhow, Spain will now be joining France, Italy, and Belgium in the Final 4 of the UEFA Nations League next year.