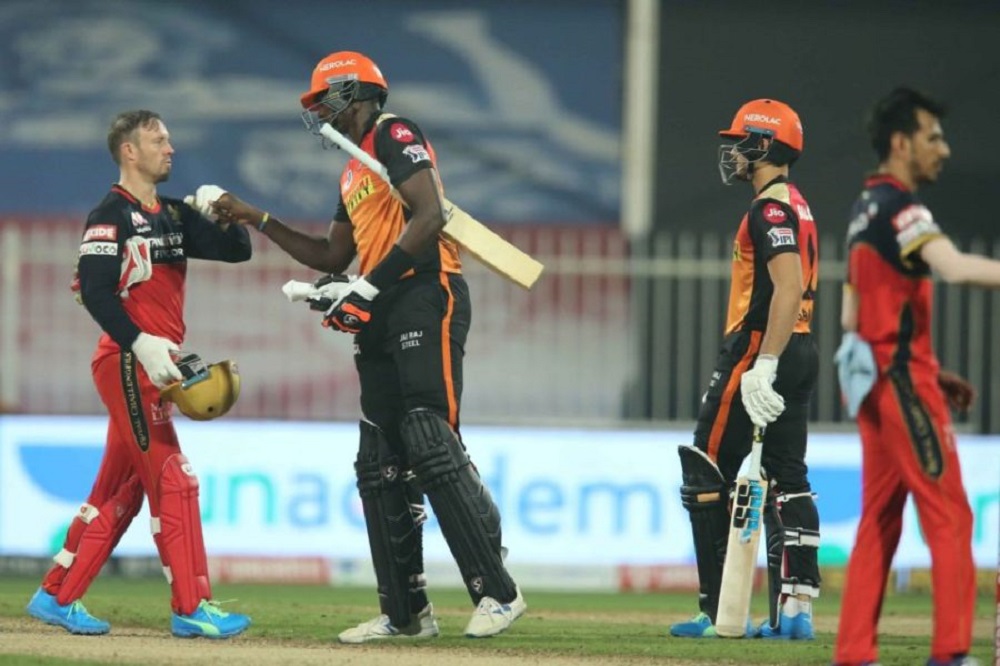 Sunrisers Hyderabad destroyed Royal Challengers Bangalore to keep their hopes of qualifying for the playoffs alive.

IPL 2020 has been nothing but completely unpredictable this season. The teams that always give their best were seen lacking behind whereas some teams that hardly made it to the top 4 were seen topping the points table. Apart from that, we also got to see some really interesting situations and new records being created. With this, we are in the final matches of IPL 2020 and it was time for match 52. Sunrisers Hyderabad were all set to face Royal Challengers Bangalore in yet another thrilling fixture. SRH had 10 points and was sitting at the 7th position. Now, they needed to win this match if they wanted to keep their hopes of qualifying for the playoffs alive. On the other hand, RCB could seal their entry into the playoffs with a victory in this match.

The match began as Sunrisers Hyderabad won the toss and opted to bowl first. Their skipper David Warner wanted to restrict RCB to a low target and that is exactly what his bowlers did. In the 3rd over itself, Sandeep Sharma dismissed Devdutt Padikkal (5 in 8) to get SRH its first breakthrough. Just 2 overs later, Sharma struck again as he sent Virat Kohli (7 in 7) back to the pavilion. However, after that, AB de Villiers came in at 4 and provided a little stability to RCB ‘s innings. Josh Philippe supported him while doing so before De Villiers (24 in 24) got out in the 11th over. In the very next over, Philippe (32 in 31) also got out.

As a result, Washington Sundar and Gurkeerat Singh Mann came to the crease. The two tried to settle in but soon in the 17th over, Sundar (21 in 18) got out. After that, Chris Morris (3 in 4) came in at 7 but did not deliver much. Then, Udana got ducked and Siraj (2 in 3) and Mann (15 in 24) took RCB’s total to 120-7. This was one of the lowest totals that RCB had made in IPL 2020. It was a low target just how SRH captain David Warner wanted. They were looking forward to an easy chase but the RCB bowlers were prepared to make it difficult for them.

David Warner and Wriddhiman Saha came to open the innings for SRH just like the previous match. The duo had smashed the DC bowlers in the previous match to get 2 points from an outstanding victory. Now, they were all prepared to chase this easy target. However, they suffered a huge blow as Sundar dismissed Warner in the 2nd over. After that came Manish Pandey (26 in 19) who thrashed the RCB bowlers along with Saha to get 58 runs on the scoreboard for his team in the powerplay. However, just after the powerplay in the 7th over, he got out. Then, Kane Williamson came in at 4 but before he could settle in, Saha got dismissed in the 11th over.

As a result, Abhishek Sharma came to the crease but in the 12th and 13th over, Williamson (8 in 14) and Abhishek (8 in 5), both got out respectively. So, Abdul Samad and Jason Holder came to finish off the innings for SRH. However, without giving Samad any chance, Holder finished the game for SRH as he hammered the RCB bowlers to score an unbeaten knock of 26 runs in just 10 balls. Sunrisers Hyderabad had won their second game consecutively to keep their hopes for playing in the playoffs alive. They defeated RCB with 5 wickets in hand and 35 balls to spare. They already had a great net run-rate and this victory helped them to increase it even more.

Together they got the big wickets of Virat Kohli & AB de Villiers and together they relished their big moments in a post-match chat in Sharjah.

Sandeep Sharma won the Man of the Match award for his brilliant 4-over spell taking 2 crucial wickets and giving away just 20 runs. Jason Holder, on the other hand, won the award for the gamechanger of the match. Wriddhiman Saha had also played an excellent innings once again to steer his team to victory. Since the addition of Saha and Holder to the squad, SRH had been brilliant. They had now reached the 5th position in the points table. If they could even manage to get a win in the next match, they could easily qualify for the playoffs as their net run-rate was much better than KKR. On the other hand, RCB needs a win to make their qualification in the playoffs confirmed. Anyhow, now SRH will be facing MI in their last match of IPL 2020 whereas RCB will be up against DC.