Sunrisers Hyderabad Hammer Mumbai Indians To Qualify For The Playoffs 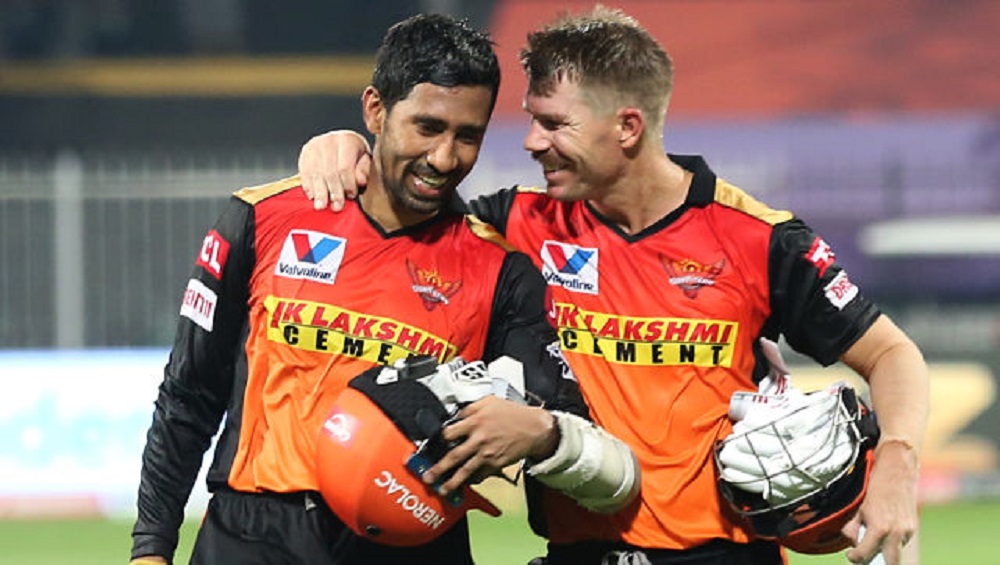 Wriddhiman Saha (left) and David Warner (right) celebrate their win against MI to secure their place in the playoffs.

Indian Premier League, the league which has entertained each one of us year after year. Every year, it fascinates and entertains us with quality cricket and games. Just like that, IPL 2020 has shown us a thrilling season this year. Teams like Chennai Super Kings and Kings XI Punjab were knocked out whereas teams like Delhi Capitals and Royal Challengers Bangalore made it to the playoffs. Not only that, we have reached the last match of the group stage but we still have only 3 teams qualified. This means that today’s match will decide the fate of the team that will finish in the 4th position and secure their place in the playoffs. It was definitely going to be an interesting game as Sunrisers Hyderabad were going to go up against Mumbai Indians, the table-toppers of the season.

Sunrisers Hyderabad hadn’t really been in their best form this season. However, they had played some good games and were getting back on track. In their past two games, they had defeated top teams like DC and RCB to keep their playoffs hope alive. Now, they just needed 2 points from this match to seal their entry into the Top 4. They were 2 points behind KKR who had defeated RR to get 14 points but KKR was far behind SRH on the points table. So, even a close win would help SRH to pave their way through to the knockouts. On the other hand, Mumbai Indians had rested their star players like Hardik Pandya, Jasprit Bumrah, and Trent Boult for Qualifier 1 which was 2 days later. But, the good news was that their skipper Rohit Sharma was back.

Sunrisers Hyderabad won the toss and their skipper David Warner opted to bowl first. The decision went in their favor as in the 3rd over, Sandeep Sharma dismissed Rohit Sharma (4 in 7). Just 2 overs later, Sandeep struck again as he got Quinton de Kock’s (25 in 13) wicket. As a result, Suryakumar Yadav and Ishan Kishan came to the crease. They stood strong at the crease and managed to get 48 runs from the powerplay after a loss of 2 wickets. The duo was building a good partnership until the 12th over when Yadav (36 in 29) got out. Just after his dismissal, the new batsman Krunal Pandya (0 in 3) also got out. Then, in the next over Saurabh Tiwary (1 in 3) also got out.

However, Ishan Kishan stood strong and Keiron Pollard came in to support him from the other end of the crease. They were just settling in when Sandeep Sharma dismissed Ishan Kishan (33 in 30) in the 17th over. As a result, Nathan Coulter-Nile (1 in 3) came in at 8 but soon got out in the 18th over. However, even after this Pollard remained unaffected and thrashed the SRH bowlers to score 41 runs in just 25 balls before getting out in the final over. So, James Pattinson (4* in 5) and Dhawal Kulkarni (3* in 2) finished off the innings for MI. At the end of the first innings, MI had managed to get a total of just 149 on the scoreboard. This wasn’t a huge total but MI was a team that could defend even low targets. So, it was going to be an interesting chase.

The second innings began and SRH’s standard opening pair, Wriddhiman Saha and David Warner came to the crease. The duo had a totally different plan for the MI bowlers as they were thrashing them from the beginning of the innings. In fact, they managed to get 56 runs from the powerplay without losing any wickets. Rohit Sharma tried all the bowlers he could but nobody was able to dismiss either of them. As a result, Warner (85* in 58) and Saha (58* in 45) finished off the chase in just 17.1 overs. Sunrisers Hyderabad had defeated Mumbai Indians by 10 wickets. This was for the first time in the history of IPL that a team had won and lost by 10 wickets in the same season.

Shahbaz Nadeem bags the Man of the Match award for his bowling figures of 2/19.#Dream11IPL pic.twitter.com/PV09vUjTAu

SRH had won the match and made it to the Top 4 of the points table. They had left KKR behind to seal their position in the playoffs of IPL 2020. Shahbaaz Nadeem won the Man of the Match award for his excellent 4-over spell taking 2 crucial wickets and giving away just 19 runs. He dismissed Suryakumar Yadav when the MI batsman had got set on the crease. Immediately after that, he dismissed Krunal Pandya to put MI under pressure. Also, he was economically the best bowler in the entire match. Now, the league stage is over and the fixtures for the playoffs are all set. Firstly, MI will be facing DC in Qualifier 1 whose winner will go through to the finals. The loser on the other hand will be facing the winner of SRH vs RCB in Qualifier 2. So, brace yourselves as IPL 2020 is all set to enter the knockouts stage.