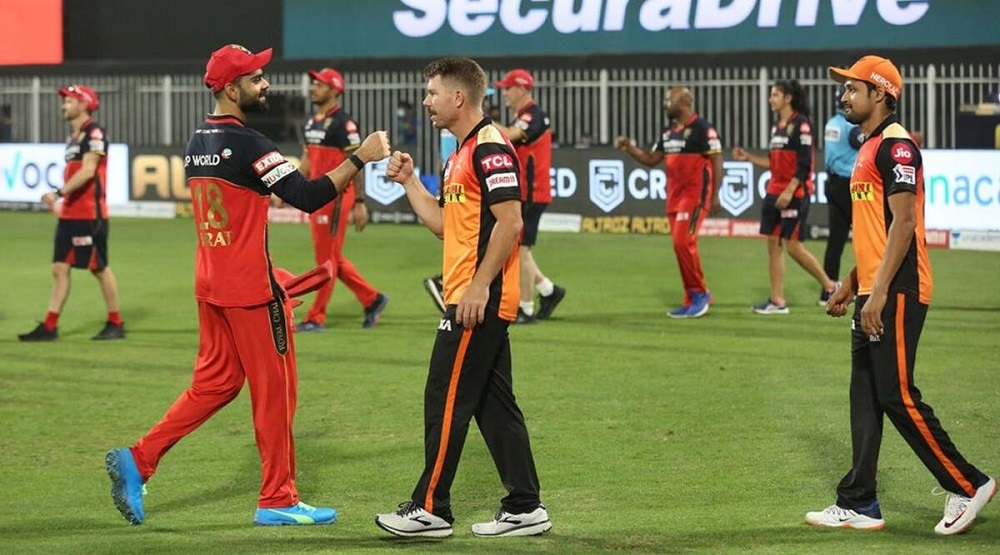 Sunrisers Hyderabad defeated Royal Challengers Bangalore in the Eliminator to advance into Qualifier 2.

It has been two months since IPL 2020 started and it hasn’t failed to entertain us throughout this lockdown. We got to see some nerve-wracking fixtures and some huge wins. On Tuesday, we finally got the Top 4 teams that qualified for the playoffs. The teams that had to return to India after being knocked out were Chennai Super Kings, Kings XI unjab, Rajasthan Royals, and Kolkata Knight Riders. On the other hand, the teams made into the playoffs are Mumbai Indians, Delhi Capitals, Royal Challengers Bangalore, and Sunrisers Hyderabad. Mumbai Indians and Delhi Capitals played Qualifier 1 on Thursday as they finished in the 1st and 2nd position respectively in the points table. MI thrashed DC to seal their spot in the finals. As a result, Delhi Capitals were now going to face the winner of the Eliminator in Qualifier 2.

Sunrisers Hyderabad and Royal Challengers Bangalore were going to lock horns with each other in the eliminator. RCB had a great start to the tournament but then went on to lose 4 games consecutively. However, they still managed to qualify for the playoffs based on their net run-rate. On the other hand, SRH did not have a good start to their season as their star players like Mitchell Marsh and Bhuvaneshwar Kumar. However, they got back on track soon to win their last 3 games against the Top 3 teams (MI, DC, and RCB) to secure their position in the knockouts. So, it was going to be an interesting fixture as we would get to see which team would advance to Qualifier 2.

SRH had won the toss and their captain David Warner opted to bowl first. This decision turned out quite well for him as in the 2nd over itself, Jason Holder dismissed the RCB skipper Virat Kohli (6 in 7). Everyone was already shocked to see Virat open the innings for RCB and now his dismissal was just a huge blow for the team. Just 2 overs later, Holder struck again as he dismissed Virat’s opening compatriot Devdutt Padikkal (1 in 6). As a result, Aaron Finch and AB de Villiers came to the crease. The duo played calmly and defensively as they did not want to lose another wicket. So, they only managed to get 32 runs from the powerplay at a loss of 2 wickets. Then, they started to go for big hits but in the 11th over, Shahbaz Nadeem dismissed Finch (32 in 30).

So, Moeen Ali came in to support De Villiers from the other end of the crease now. However, the former (Ali- 0 in 1) got run-out on a free hit in the 11th over only. As a result, Shivam Dube came to replace him. The all-rounder tried everything along with De Villiers but was not able to deliver much. Soon in the 16th over, Dube also got out. Now, Washington Sundar came in at 7. De Villiers and Sundar were RCB’s last hope from the batting line-up. However, both Sundar (5 in 6) and De Villiers (56 in 43) got out in the 18th over. So, Navdeep Saini and Mohammed Siraj finished the innings for RCB. They could only get their team total to 131-7 in their 20-over innings.

132 wasn’t a huge target but RCB had a bowling lineup that was capable of defending this. David Warner and Shreevats Goswami opened the innings for Sunrisers Hyderabad. Wriddhiman Saha wasn’t playing as he had got injured in the previous match against MI. This injury proved to be expensive for SRH as in the first over itself, they lost their first wicket. Siraj dismissed Goswami (0 in 3) to get RCB its first wicket. So, Manish Pandey came in at 3 and was playing a good partnership with Warner. They got good runs in the powerplay until the 6th over when Siraj struck once again to dismiss Warner (17 in 17). Even then, Warner had managed to get 48 runs from the powerplay itself with the help of Pandey.

Soon after the powerplay, Pandey (24 in 21) also got out in the 9th over. Now, Kane Williamson and Priyam Garg were on the crease. They were taking it slow as they knew saving wickets till the end was important. However, Garg went for a big shot and lost his wicket to Yuzvendra Chahal in the 12th over. As a result, Jason Holder came in at 6. SRH was 67-4 in 11.5 overs and now needed 65 runs in 49 balls. It wasn’t a difficult chase but Holder and Williamson needed to keep their calm and that is exactly what they did. They played a calm and composed game going for the boundaries only when it seemed right and led their team to victory in 19.4 overs. Williamson scored a match-winning knock of 50* in 44 whereas Holder chipped in 24 runs from 20 balls.

Mutual admiration between these two who held their nerves right till the last over to help #SRH secure a 6-wicket win. Here's ice-cool Kane in conversation with all-rounder @Jaseholder98.

Kane Williamson won the Man of the Match award for his unbeaten innings of 50 runs in 44 balls. He had delivered when his team needed him the most and helped them move ahead to Qualifier 2. Jason Holder, on the other hand, won the Gamechanger of the match award for his brilliant contributions in both bowling and batting. He gave away just 25 runs taking 3 crucial wickets and also scored 24* in 20 balls to play a well-settled game for SRH. RCB had made into the playoffs after 4 years but had now been knocked out whereas SRH, who did not quite have a great start to the season will now be facing Delhi Capitals in Qualifier 2. DC and SRH will be clashing on 8th November at the Sheikh Zayed Stadium in Abu Dhabi.