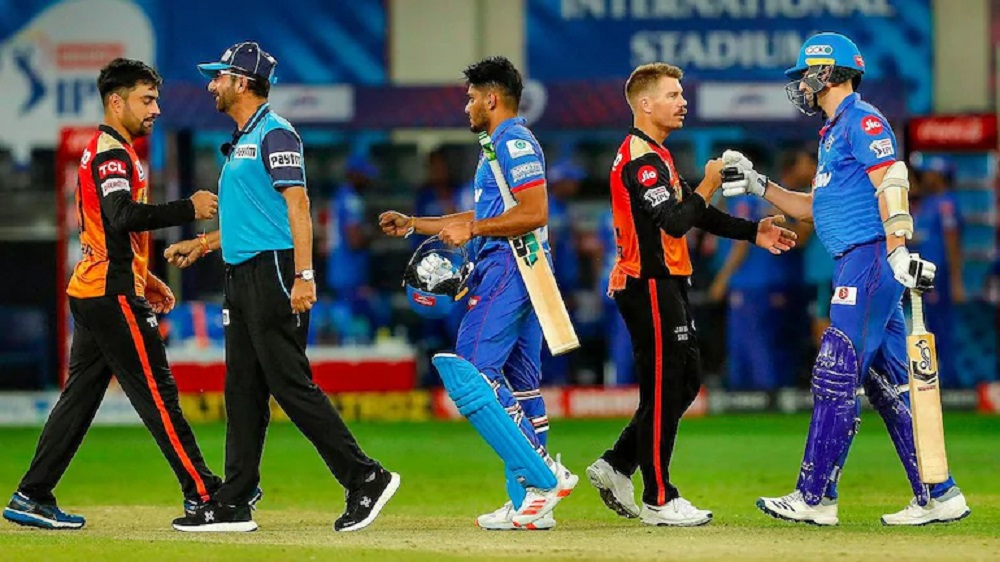 Sunrisers Hyderabad defeated Delhi Capitals to keep their hope of qualifying for the playoffs still alive.

IPL 2020 has been one of the most thrilling seasons in the history of IPL. From a super-over in the 2nd match to a double super-over for the first time ever in IPL, we have seen everything. The teams that used to always qualify for the playoffs 4 have barely even made to the top 4. Just like that, we have got to see some very interesting fixtures till now. So, it was time for another such match as Sunrisers Hyderabad was going to lock horns with Delhi Capitals. Delhi Capitals had been in their best form this season as they had lost only 4 matches out of their 11 games. On the other hand, Sunrisers Hyderabad did not get a great start to their season. However, they managed to get a few wins as they had won 4 out of their 11 games. Now, SRH needed a win in every match if they wanted to be able to qualify for the playoffs. On the contrary, DC needed only 1 win to fix their spot in the playoffs. In their previous 2 matches, KXIP and KKR had denied them as DC lost both the games in a crushing manner.

Delhi Capitals won the toss and their skipper Shreyas Iyer chose to bowl first. He was confident as DC’s bowling attack had been really impressive this season. He wanted his bowlers to restrict SRH to a low total so the batsmen could chase an easy target. However, SRH seemed to have some different plans. The David Warner-led side had dropped Jonny Bairstow and chosen Wriddhiman Saha over him as the wicket-keeper and opening batsmen. They had also brought in Kane Williamson to the attack. The match started as Saha and Warner came to open the innings for their side. The duo was in excellent form as they thrashed the DC bowlers from the start. They managed to get 77 runs from the powerplay itself without losing a single wicket.

In the 10th over, Warner (66 in 34) got out but he had managed to build a partnership of 107 runs in just 58 balls with Saha (87 in 45). Then came Manish Pandey who was also going for the big shots from the start of his innings. However, in the 15th over, Saha also got out. As a result, Kane Williamson came to the crease. Williamson (11* in 10) along with Pandey (44* in 31) managed to get 219 runs on the scoreboard for SRH at a loss of only two wickets. The SRH top-order batsmen had totally dazzled the DC bowlers and beat the pulp out of them. Now, DC had to chase a massive target of 220 runs in their 20-over innings if they wanted to qualify for the playoffs.

Ajinkya Rahane and Shikhar Dhawan opened the innings for the Delhi Capitals. However, the duo was not able to get their side a great start as Dhawan (0 in 1) got out in the first over itself. Then their captain Iyer sent Marcus Stoinis to the crease. Everyone was confused by this decision but Iyer had sent in Stoinis so that he could smash a few boundaries to get DC the start that they really needed. However, in the 2nd over, Stoinis (5 in 6) also got out. So, Iyer sent Shimron Hetmyer to support Rahane from the other end of the crease. Hetmyer and Rahane managed to get a good partnership as they scored 54 runs from the powerplay. However, just after the powerplay in the 7th over, Rashid Khan dismissed both, Hetmyer (16 in 13) and Rahane (26 in 19).

So, finally Rishabh Pant and the DC captain Shreyas Iyer came to the crease himself. The duo tried to build a partnership but soon Iyer (7 in 12) got out in the 12th over. In the very next over, Axar Patel (1 in 4) also got out. Then came Kagiso Rabada but it was too late as DC now needed 136 runs in just 43 balls. Soon, Natarajan dismissed Rabada (3 in 7) in the 16th over whereas Sandeep Sharma struck again to dismiss Rishabh Pant (36 in 35) in the very next over. After that, in the 18th over Ashwin (7 in 5) got out and soon enough, Nortje (1 in 3) also lost his wicket to leave behind Tushar Deshpande (20* in 9) standing alone on the crease. As a result, SRH had won the match by a whopping 88 runs.

Wriddhiman Saha won the Man of the Match award for his brilliant knock of 87 runs in just 45 balls. The wicketkeeper-batsman had just played his second match of IPL 2020 so far. However, it seemed like he had been in excellent form already. He also got selected in India’s Test squad for the Australia series and is looking forward to playing some good cricket there too. Talking about the points table, Sunrisers Hyderabad moved up to the 6th position after bagging 2 points against DC. Delhi Capitals, on the other hand, is still looking forward to getting the 1 win that they need to fix their spot in the playoffs. As a result, they will be playing MI in their next fixture whereas SRH will be up against RCB.