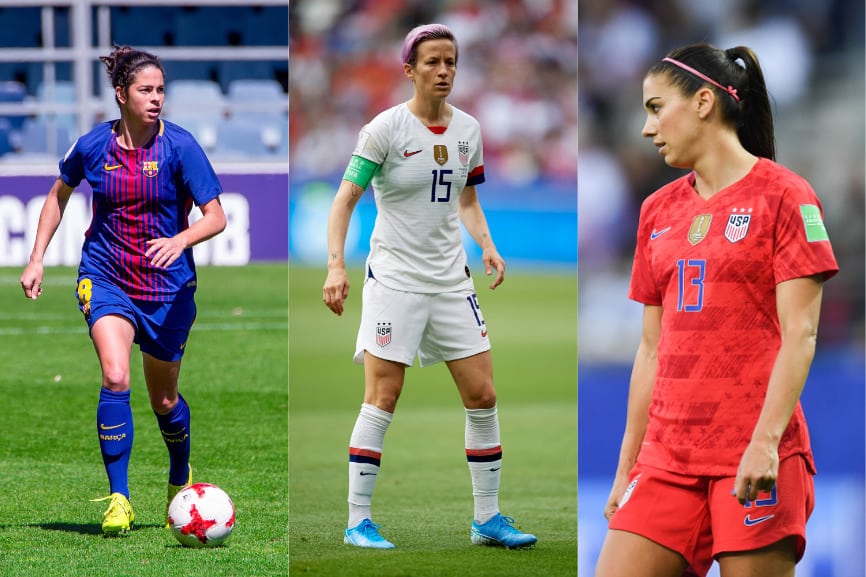 Top 6 Women Soccer Players That You Should Watch in League

Top 6 women soccer players, a type of list which is always a difficult one to make. The abundance of quality with quantity is available, and it really becomes difficult to leave out any. However, certain things must be done, and I am here today to discuss the top 6 women soccer players. Many people are not aware of this, but the history of women’s soccer is only 31 years old. Before that, they were not really in the professional mix of things. It started in China in 1991, and from then on, it has gradually increased. Fighting all the misogyny, gender differences, and sexism, the ladies found their way to the pitch. It was been a fruitful journey and a lot to celebrate for.

There have been many editions of the women’s world cup so far in these 31 years. Mostly USA, Brazil, and some European countries have dominated the sport. Some years ago, there came a time when Japan was the best team in the world. They had won the world cup. Recently, the sport is being dominated by the US team. Because of their exceptional performance, they have been given equal pay. It is the same as the USA men’s team gets. This has been a significant step toward gender disparity. Hope to see a lot more equal things happening in the future. But as they say, sport is a great leveler.

Note: These are just top 6, not ranked in any order.

Marta definitely makes the list of top 6 women soccer players. She has dual citizenship in Brazil and Sweden. She plays as a forward and is remembered for scoring spectacular goals in soccer. As far as the club is concerned, she plays for Orlando Pride in the National Women’s Soccer League and is the forward for her National Team. Her goal-scoring record is terrific and is probably the reason why she deserves to be on the top 10 list. She has a whopping 109 goals in 155 appearances for Brazil. Many regard her in the top two or top three all-time best player category. But I am not doing that. I am just putting her in the list. The only thing missing in her career is probably a major trophy. Otherwise, she has a fantastic career.

Also Read: UEFA Under-19 Semi-Finals: Where To Watch In The US, UK, And Australia

Retiring at only 29 years of age, Louisa still makes the list of top 6 best women soccer players. She is undoubtedly one of the best or probably the best midfielder ever seen. She was famously known as the female Zidane but I would her to call First Louisa only because she made that presence. Her dominance in the midfield was very admirable, her passing, dribbling, and everything. She could have been a part of the world cup team if she didn’t retire. Nevertheless,  what a player and what a career she had. Truly amazing and inspiringMia Hamm: USA, Top 6 Women Soccer Players

Mariel Margaret Hamm-Garciaparra, or Mia Hamm, is an American soccer player who started off in 1986. She played as a forward and a midfielder. Easily one of the best on the field, she became one of the highest-earning players. She was one of the first female players to fight for equality and against stereotypes. She became a solid inspirational figure for other women to follow, not necessarily just in sports. At only 15, she made her debut for the national team. She is a two-time recipient of Fifa Player Of The Year. Also has an Olympic Gold Medal to her name and has won the world cup twice. She is really a celebrated player. Mia is regarded by many as the best female soccer player of all time.

Megan Repinoe is also an American soccer player who makes the list of top 6 women soccer players. She started off her career in 2002 and played for the Elk Grove Pride and Portland Pilots till 2008. In her career which has lasted almost 20 years now, she has represented 9 different clubs. Megan has also played for the French club Lyon and won numerous titles. She is one of the most famous soccer players at present and is often searched online. She is the top scorer in the FIFA World Cup 2019 and since then her popularity has grown ten folds. The golden boot was awarded for her performance in the 2019 world cup.

Much like Mia Hamm, Birgit Prinz started her career in 1986 but she played her initial years in Germany. Apart from her soccer skills, she was also regarded as the hottest player during that time. Of course, she is even regarded as one of the best players to play soccer ever. Birgit has a lot of awards to her name, which includes FIFA World Player Of The Year, German player of the year, and the FIFA World Cup. Her goalscoring record and number of appearances have been terrific as well. She played 214 national games and scored 128 goals. This record speaks volumes for the kind of player she was.

Alex Morgan has been the center of attention for a few years now. The striker is now 32 and definitely makes the list of the top 6 women soccer players. She is the only player after Mia Hamm to score 20-plus goals and 20-plus assists in a calendar year. She became the youngest US player to do. Her personality and the way she plays, scores, and assists, bring a lot of comparisons with Mia Hamm. The good thing is that they both represent the USA. Alex has been the star striker for the US national for many years now. She is tall, can head the ball, is good with both feet, all-in-all she is the perfect striker. Alex, along with her teammates fought a lot for equal pay rights. After being ignored multiple times by the US soccer federation, very recently they won the battle.

Being world champions, they demanded that respect and got it in the end. Alex’s contribution to this movement was immense. She has also modeled for many sports magazines as she is very famous for her beauty as well.

This is my list of top 6 women soccer players.

Also Read: Chelsea Football Club: How Their Squad Is At Present?