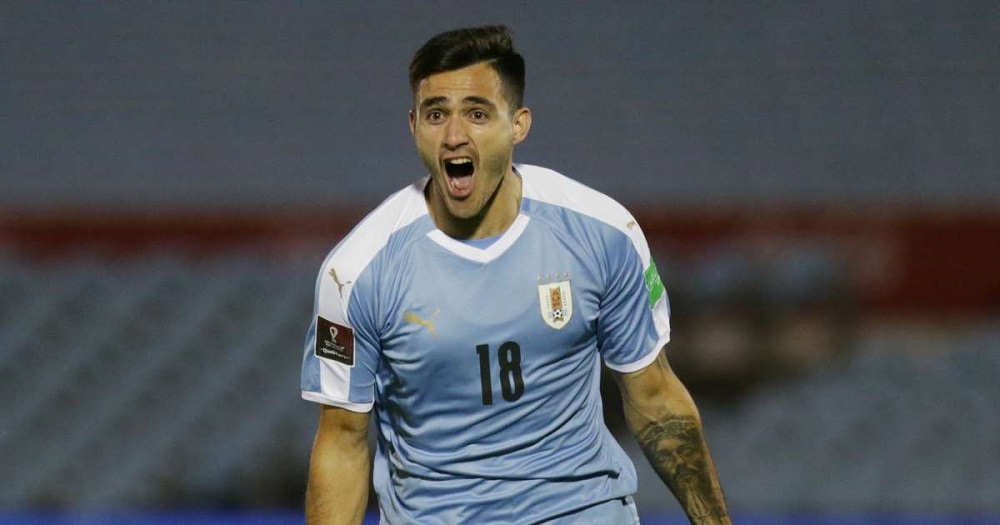 M. Gomez celebrates after scoring the late winner for Uruguay in Uruguay vs Chile.

We got to see some exciting matches as the Qatar FIFA World Cup Qualifiers began on Friday. We saw Argentina going up against Ecuador, Peru locking horns with Paraguay, and Uruguay go head to head with Chile. However, Uruguay vs. Chile was the match that caught everyone’s attention as La Celeste managed to win the match with a late goal from M. Gomez. The fixture was definitely going to be exciting as both the teams had some world-class players. The lineups for both the teams were as follows:

Chile started the match as they kicked off on the referee’s whistle. Both the teams were playing aggressive and wanted to take the lead from the start. However, things worked out in Uruguay’s favor as they were pressing more and building pressure on Chile. Even in possession, Chile was behind Uruguay as the latter did not only press their opponents but were also maintaining possession. On the other hand, Chile was creating more chances and was attempting shots again and again. They were continuously denied by the Uruguayan goalkeeper M. Campana. Finally, in the 39th minute, Suarez broke the deadlock as he converted a spot-kick. Rodriguez had dribbled the ball in the box and was crossing it in. His shot directly hit the defender’s hands, and hence, Uruguay was given a penalty. Suarez made no mistake and fired it into the goal immediately.

At the end of the first half, the score was 1-0 in Uruguay’s favor. However, Alexis Sanchez only took 9 minutes into the second half to score the equalizer. After that, both the teams were again struggling to find the back of the net as they were desperately looking for a win. Finally, in the injury time, M. Gomez scored a late goal in the 93rd minute to give his team a 1-goal lead again. Then, the match ended as Uruguay had won their first match of the World Cup Qualifiers. They on the top as Argentina had only scored a single goal whereas Peru had drawn with Paraguay.

From that match, both the teams realized their mistakes and will surely be looking forward to work on them. Uruguay definitely needs to work on creating more chances. In the entire match, they had only taken 2 shots on target. Even though they converted both of them, they need to work more in the attack. On the other hand, Chile needs to work on both their attack and defense. There were many gaps as Suarez, and the attacking midfielders rushed past them throughout the match. All and all, both the teams will be practicing more to get a win in their second match of the Qualifiers on 14th October.