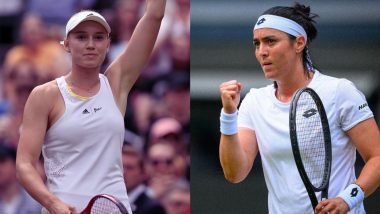 Wimbledon 2022 Day 13 showed the world that dreams can be achieved if you put your mind and heart to them. Elena Rybakina created history on Saturday by winning her first grand slam major at the age of 23. She defeated O.Jabeur from Tunisia, who was also making her first final appearance. Both the players had a terrific journey coming into the final, and it felt tough. Rybakina is the first player from Kazakhstan to win a grand slam trophy. Her decision to change her nationality in 2018 has now paid dividends. She is a born Russian in Moscow and is now a Kazakh citizen for over 4 years. If she was still a Russian today, she couldn’t have participated in the tournament. Call about timing!

On the other hand, O.Jabeur hails from Morocco. She is the first Arab woman to reach such success in the world of tennis, inspiring millions of other female Arabs to take up the sport. She performed brilliantly in the tournament, and her ability to play fearless tennis was clearly seen throughout the tournament. It is safe to say, her journey to the finals of Wimbledon was quite a brave one. Her quarterfinal and semi-final clash were close ones, otherwise, she looked comfortable in other rounds. Jabeur’s husband is her coach as well, her guide, and her philosopher. All in all, it was a great journey for the Moroccan professional, and had a long way to go.

Both the ladies entered the Centre Court for the final of Wimbledon 2022 Day 13. It was a hot day in London, and the spectators were ready with their hats and fans. The match had to be tough, with both Rybakina and Jabeur playing in the final for the first time. The nerves were high, the atmosphere was tense, and it was time to see a completely new winner. The way the match started, Rybakina looked a little lost. People felt the 23-year-old is not able to calm herself down on such a big occasion. Jabeur pounced on her like a lioness. She was brutal in the first set and did not give her opponent any chance. Her drop shots were like bullets to Rybakina. It had multiple spins so that moment the ball landed, it would take a backstep. We all thought it would be a run-riot for the Moroccan. She took the first set 3-6.

The start of the second set saw a more fearless Rybakina. This is what the audience wanted to see as well, and they got it. Rybakina’s set was on point, her groundstrokes were so powerful that even a fast runner like Jabeur had no answers. Elena’s first serve speed was too hot to handle on the other side. They averaged around 117-118 miles per hour. Her forehands and backhands found some terrific angles. Even though Jabeur was trying her best, her best was not enough.

The serves, the groundstrokes, and the overall game proved to be too good to be true. The second and third sets were just masterclass from the Kazakh international. She destroyed Jabeur with her power and her willingness to fight. Rybakina won the remaining sets 6-2 and 6-2. It looks like the future of women’s tennis is bright.