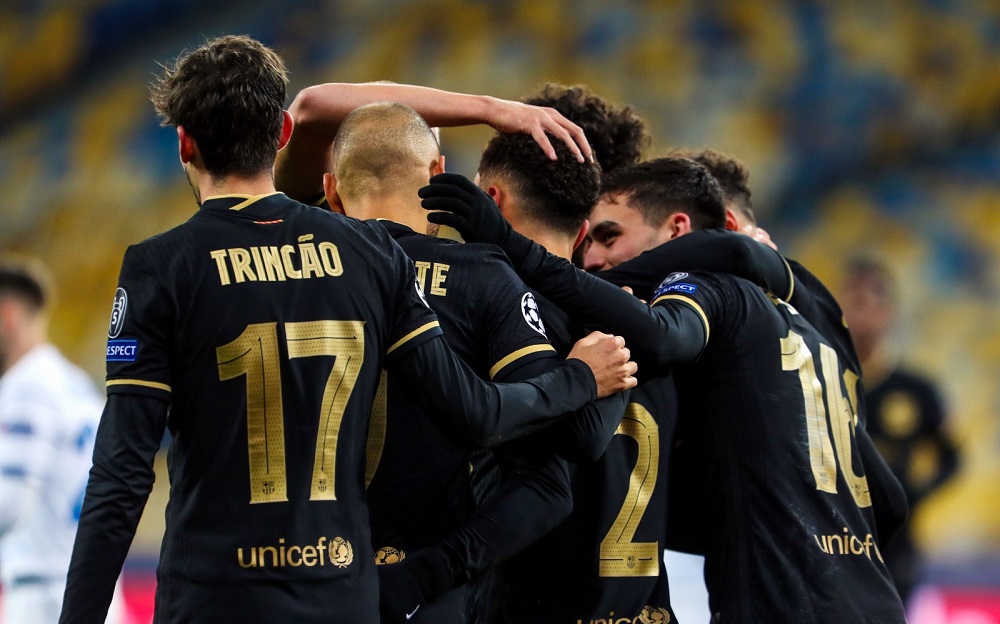 A still of the Barcelona players celebrating as they thrashed Dynamo Kyiv in their 4th matchday of the UEFA Champions League.

The UEFA Champions League returned yesterday with some amazing fixtures once again. After the international break, the league was hosting its 4th matchday. Until now, we’ve got to see some really thrilling fixtures and it was time for yet another nerve-wracking match. Barcelona was going to locked heads with Dynamo Kyiv for their 4th group-stage match. The Catalans were sitting at the top of the points table with 9 points as they had won all of their 3 matches until now. On the other hand, Dynamo Kyiv had not won any match and the only point that they had was from their match against Ferencvaros. However, Dynamo were still at the 3rd position in the points table as they had a greater goal difference than Ferancvaros. Anyhow, now Dynamo had a chance to keep their UCL hopes alive whereas Barcelona could confirm their qualification with the 3 points from victory.

The match began as Barcelona kicked off and the Blaugranas were playing their natural possession game. Ronald Koeman had decided to drop De Jong and Messi from the squad to give them rest. Other players like Pique, Roberto and Fati were also out due to injuries. As a result, the youngsters got a chance to play for Barcelona. So, the former Dutch manager put up a good yet shocking lineup as he dropped Griezmann and Dembele from the starting 11. However, things went his way as Barcelona were playing great.

Not only were they maintaining great possession but were also pressing highly to create pressure on their opponents. They were creating many chances but could not convert any of those. Dynamo Kyiv, on the other hand, also got some good chances but even they failed to put the ball into the back of the net. However, they didn’t manage to score a single goal in the first-half as the score at half-time was 0-0.

The second half began and now Barcelona were looking really hungry for goals. As a result, just 7 minutes into the second half, the Catalans got their first goal of the game. The 20-year-old put the ball past the Dynamo goalkeeper H. Bushchan. He picked up the ball from Braithwaite inside the box as he dashed past the defenders and placed the ball into the bottom left corner to score a goal in his debut UCL match for Barcelona. However, that was not it as in the 57th minute, Braithwaite scored the second goal for the Catalans after a header assist from O.M. Garcia. As a result, within just 12 minutes, Barcelona had doubled their lead against the Ukrainian side.

Even then, they played aggressively as they wanted to score more goals. So, in the 70th minute, Braithwaite scored from a spot-kick after Popov pushed him inside the box. The Denmark forward immediately took the penalty and made the score 3-0 in Barcelona’s favor. After that, in the injury time in the 92nd minute, Griezmann sealed the victory for the Blaugranas. Alba played a short pass to Griezmann as the French international smashed the ball past Bushchan.

Barcelona had completely thrashed Dynamo Kyiv in their 4th matchday to qualify for the Round of 16. They are now sitting at the top of the points table with 12 points from the 4 victories in their 4 matches. On the other hand, Dynamo Kyiv continue their 3rd position as they haven’t won a single match yet. Anyhow, Barcelona will now be facing Ferancvaros whereas Dynamo Kyiv will be up against Juventus in their next fixture.