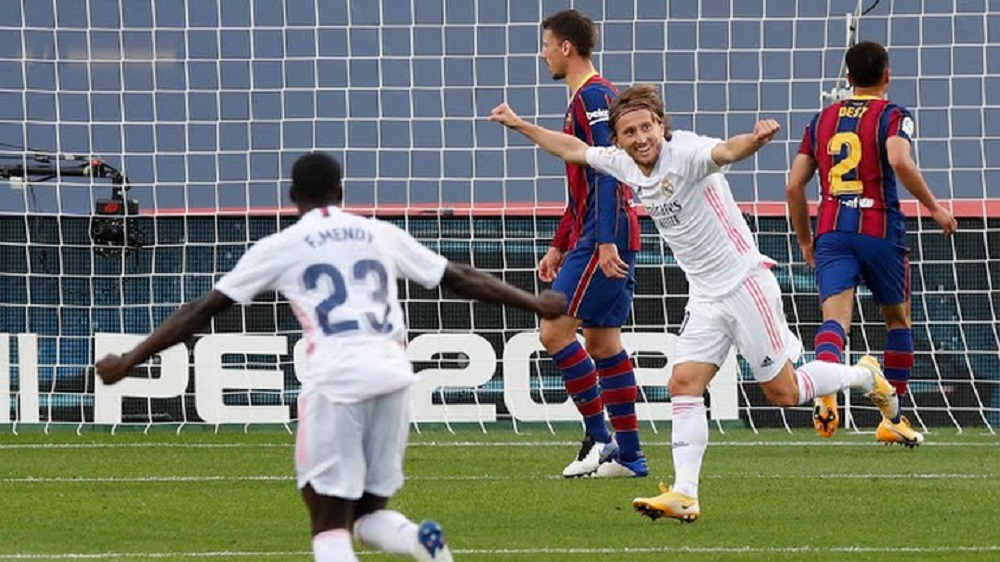 A still of Modric celebrating after he scored the final goal of the game for Real Madrid.

El Clasico, if you are a football fan, you must know what this stands for. El Clasico is the biggest rivalry in the history of football between the two Spanish giants, Barcelona and Real Madrid. Not only have these two teams dominated in the Spanish top-flight but have also ruled the entire stage of European football. So, it was time for the two to clash once again. However, none of them have had their best season till now in La Liga 2020/21. Both had lost and drawn 1 match each. In fact, Real Madrid had also lost their first group stage match of UCL just last week against Shakhtar Donetsk. As a result, the clash was going to be really interesting. Whichever team would win would win the 3 points to rise up on the points table. So, let us see what happened in the match.

The match began and Real Madrid kicked off on the referee’s whistle. Both the teams were playing aggressively from the start in the need for an early goal. Soon, Real Madrid struck as the Barcelona defense made a huge blunder. Benzema kept a good through ball to Fede Valverde who went one-on-one with Neto to smash the ball in the left corner of the net.

However, just 3 minutes later Barcelona responded as Alba dashed down the left flank to keep in a low cross for Ansu Fati. The 17-year old tapped it in to become the youngest scorer in the history of El Clasico. After that, both the teams were creating many chances once again but none of them was able to convert any of those. As a result, the score at the end of the first half was tied at 1-1.

The second half began and it seemed like they were both determined to get a win in this match. Both went all-out attack but again they were only able to convert chances. None of them was being able to find the back of the net. Finally, in the 63rd minute, Ramos found the back of the net from a spot-kick. The Los Blancos defender won himself a penalty when Lenglet pulled his shirt inside the box during a corner. The Real Madrid skipper had helped put Barcelona behind as he scored for his side to make it 2-1.

Barcelona tried all kinds of stunts to level the scores but was not able to find the back of the net even once. Finally, in the 90th minute, Modric scored for his side after coming from the bench. He scored an absolutely stunning goal after dazzling the Barcelona defense make the score 3-1. His goal sealed the victory for Real Madrid as that was the last goal of the match.

With the win in El Clasico, Real Madrid moved straight up to the 2nd position in the points table. The Los Blancos also overtook Barcelona in all-time El Clasico wins as they have 97 wins in their bag now whereas Barcelona is just one behind at 96. From this fixture, we learned many important things as the league is now fully in motion. We got to see that Barcelona is able to create chances but they lack in scoring goals. Messi goes in too deep which holds him back from scoring opportunities. On the other hand, Busquets tires out too early which creates spaces for the other teams to strike. So, Barcelona will definitely need to work on their defense and conversion.

A controversy also came to light as Ramos won the penalty for his team in the 59th minute. Lenglet had pulled his shirt during the corner. However, every Culer was frustrated as they felt that Madrid did not deserve the penalty. Fans also took it to their social media to say that Ramos had clearly dived as he fell in the opposite direction from which Lenglet was pulling him. Later on, a report also came out that the linesman had told the match referee that Ramos had fouled Lenglet first and it was a freekick for Barcelona. However, the report has not been confirmed until now. Anyhow, both the teams will now be preparing for their 2nd fixture of UCL as Barcelona will be locking horns with Juventus whereas Real Madrid will be going up against Monchengladbach.