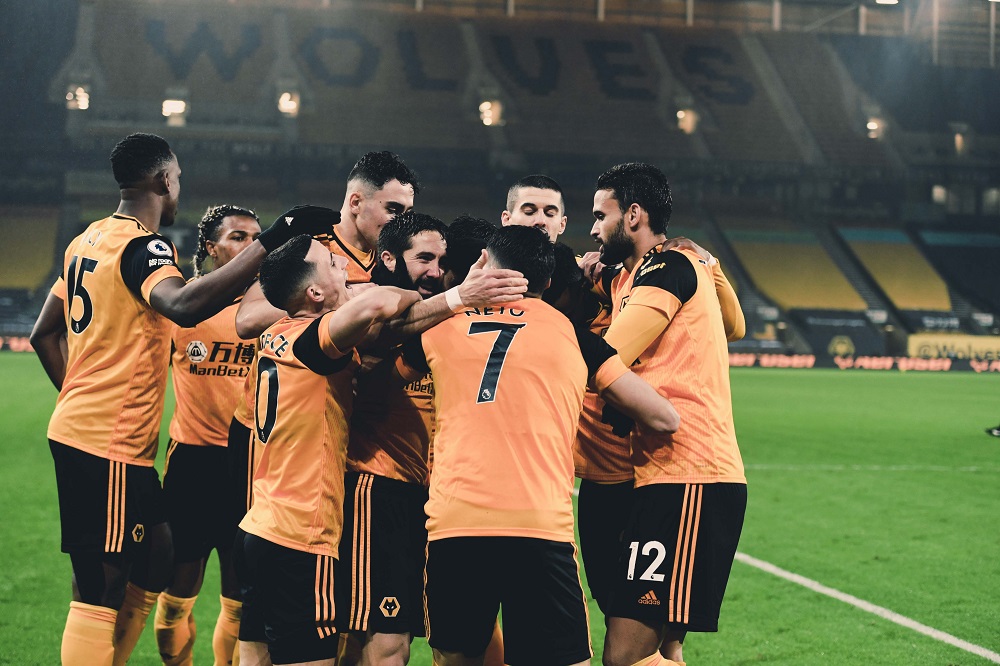 Wolves made an outstanding comeback against 9-man Arsenal to win the mid-week PL game.

Yesterday night, Wolves hosted Arsenal at the Molineux Stadium for their 22nd fixture of this season. It was going to be an exciting battle as both the teams wanted to win this match and move up the points table. Both the teams were well prepared but the Gunners seemed to have the upper edge. They had not lost even 1 of their last 7 fixtures. Ever since Christmas, they had just been rising and rising on the points table. On the other hand, Wolves had failed to win a match since their last 8 fixtures. As a result, the stakes were high for both of them, and neither wanted to settle for a draw but wanted all the 3 points from this game.

The match began as Wolves kicked off but it didn’t take Arsenal much time to steal the ball from them. In fact, in the 1st minute of the game itself, the Gunners launched an attack where Bukayo Saka took an attempt on the goal. However, the 19-year old only managed to hit the post as the score remained 0-0. But, it was only a matter of time before they got their first goal. In the 9th minute, Arsenal thought they had at last got an early lead through Saka. However, soon the referee disallowed it as Lacazette was offside during the buildup of the goal.

The Gunners were playing good football by keeping the possession to themselves and creating chances at the same time. Finally, in the 32nd minute, the visitors got a breakthrough via Nicolas Pepe. The winger played a one-two with Lacazette before going for an insane solo run. He dribbled past Semedo and Neves before firing the ball into the goal with his weaker right foot. Consequently, the visitors had finally got into the lead and were now looking comfortable.

The Gunners seemed to be doing good but they got a huge blow in the injury time of the first half. In the 48th minute (45+3′), David Luiz got suspended as the referee showed him a red card. The Brazilian defender caught Willian Jose’s heel when the latter was in a one-on-one goalscoring opportunity against Leno. As a result, Wolves got a penalty and Arsenal had been reduced to 10 men. Ruben Neves took the spot-kick and easily converted it to level the scores. He smashed it into the top right corner after sending Leno in the wrong direction. Anyhow, the score at the end of the first half was 1-1.

The second half began and now it seemed like Arsenal was just looking forward to settling for a draw. However, just 4 minutes into the second half, the hosts managed to pull off an extraordinary comeback. Joao Moutinho scored a banger from a distance after Pedro Neto laid off the ball for him. The ball hit the left post and went straight into the goal. Leno gave his best but could not stop the absolutely amazing effort from the Wolves midfielder.

Things got worse for Arsenal in the 72nd minute when the referee sent their goalkeeper B. Leno off the ground. Semedo sent in a through ball but Leno rushed out of his box to punch the ball away from Adama Traore. Consequently, the linesman saw it and the referee immediately reach out to his pocket and gave a red card to him. Now, Arsenal were down to 9 men and seemed to have no hope left. The hosts just passed the ball around then taking no risks for a third goal. They made utmost use of their 2 extra players on the field. Finally, the referee blew the full-time whistle as Wolves ended Arsenal’s unbeaten streak to win their first league game after 8 matches.

With this victory, Wolves increased their points tally to 26 points. Even though they didn’t move up the points table and maintained their 14th place, they are now just 5 points short for the Top 10. On the other hand, Arsenal maintained their 10th place with 31 points in hand. Anyhow, both the teams will be looking forward to their upcoming league games now and prepare for that whole-heartedly. Arsenal will be going up against Aston Villa whereas Wolves will be locking heads with Leicester City.