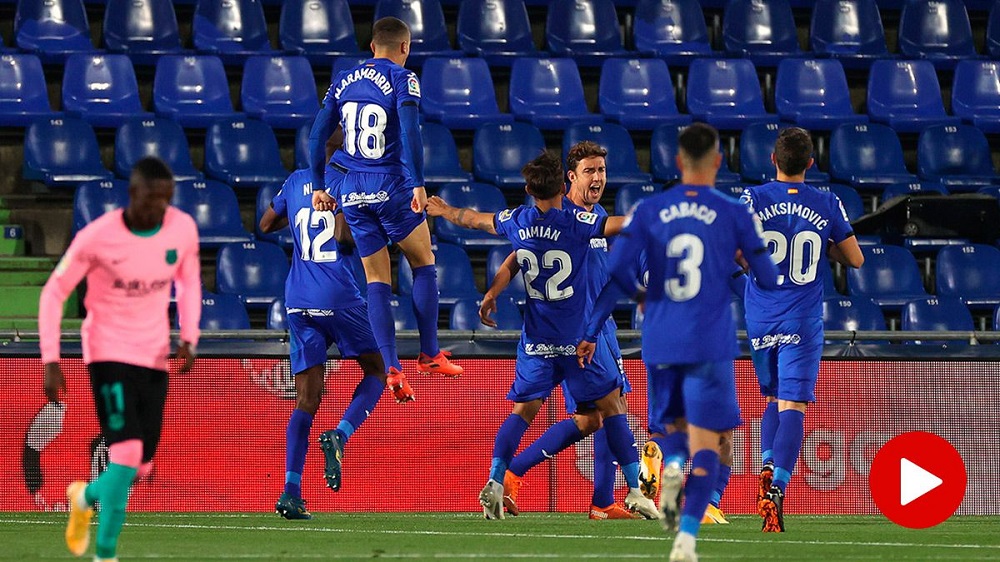 Yesterday night, Barcelona played their 4th match of the season against Getafe. They had a pretty good start to the season under their new boss Ronald Koeman. They won their first game against Villareal and the next one too against Celta Vigo with just 10-men. However, Sevilla broke their winning streak as the match ended in a draw. Now, they were up against Getafe and were desperately looking for a win to move up on the points table. Getafe, on the other hand, was also in need of a win as it could take them to the top. So, both teams were ready to battle it out.

The lineups for both the teams were as follows:

The Barcelona coach Ronald Koeman went with a formation of 4-2-3-1 with Griezmann as the sole striker. Jordi Alba had been ruled due to a hamstring injury and Dest had replaced him. On the other hand, Coutinho and Fati had been given rest as they had just returned from international duty.

The Getafe manager J. Bordalas chose a formation of 4-4-2 with Hernandez and Mata as the striking duo.

The match began and Barcelona kicked off. Barcelona was playing their possession game but Getafe was playing very aggressively. Not only were they pressing but also, they were playing quite physically. However, in the 19th minute, the Blaugranas created a wonderful play as Pedri passed the ball to Dest, who further set up a shot Lionel Messi. Messi smashed the ball but unfortunately, it hit the post. Then, again in the 20th minute, Messi created a great chance for Lenglet who failed to get a proper touch on the ball. Just a minute later, Griezmann got a one-on-one chance with the Getafe goalkeeper but smashed it above the goal. On the other hand, Getafe were also getting chances but were not able to convert any of those. Neto made some brilliant saves to keep the score at the end of the first-half 0-0.

Now, both the teams came onto the ground as they were looking for a goal to grab the 3 points from a victory. In the 55th minute, Getafe got a penalty as De Jong fouled Dakonam inside the box. De Jong was attempting to take the ball from him but accidentally stepped across him. Jaime Mata took the spot-kick and made no mistake. He converted the penalty after sending Neto the wrong way. However, Barcelona did not give up and went all-out attack on Getafe but could not find the back of the net. They tried everything from their book of tricks but Getafe was fully determined to defend their 1-goal lead. Not only did they defend, but Getafe also took advantage of Barcelona’s all-out attack and created some brilliant attack. However, all their attempts were saved by the Brazilian keeper Neto Murara.

Barcelona lost the game 1-0 to the hosts, Getafe. It was really bad as on Tuesday they will be starting their UCL campaign and after that, they will be playing Real Madrid at home i.e. the first El Clasico of the 2020/21 La Liga campaign. On the other hand, Getafe were extremely happy as they had defeated Barcelona for the first time since 2011. With this victory, Getafe moved up to the 2nd position on the points table just behind Real Madrid. Anyhow, now Getafe will be playing Granada in their next fixtures whereas Barcelona will be locking horns with Real Madrid.