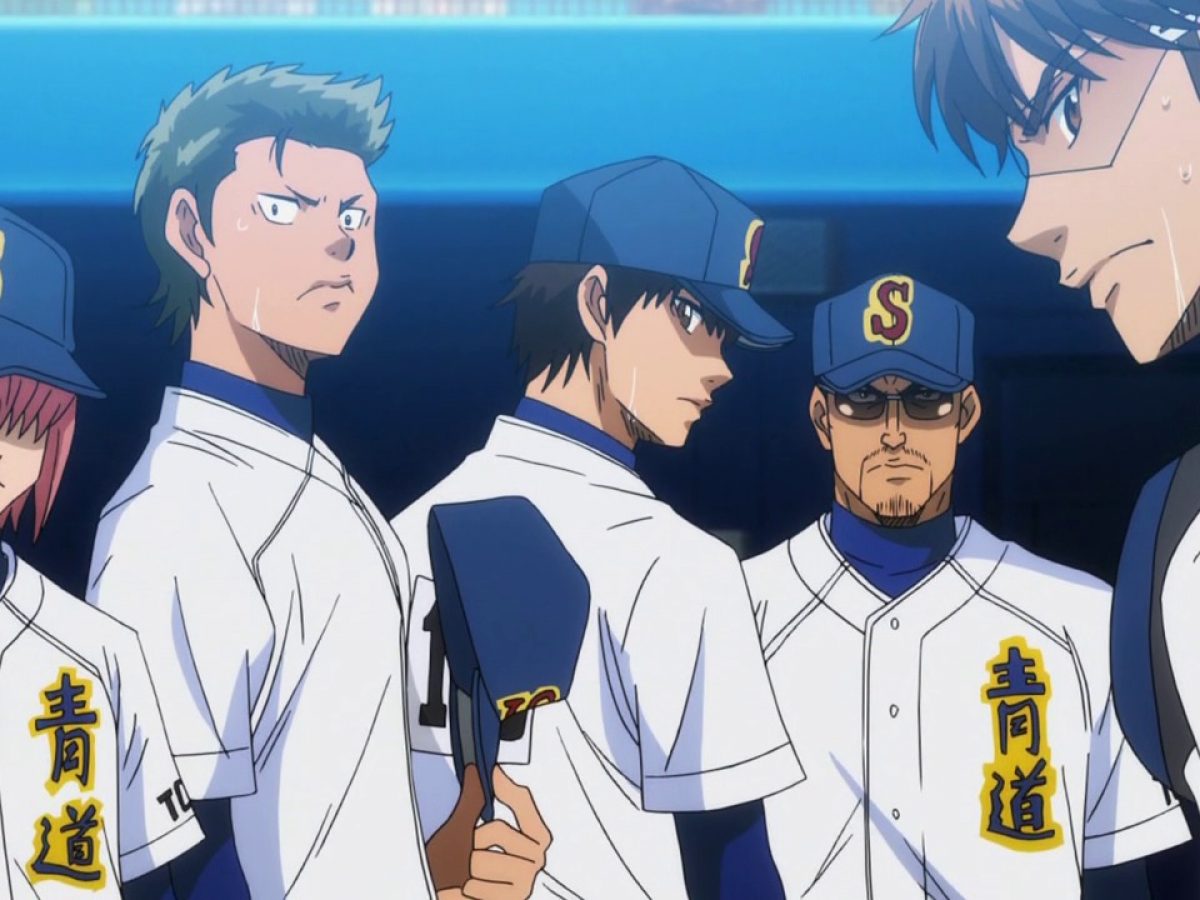 Diamond No Ace or better known as Ace Of Diamond, is a shonen sports anime based of an ongoing manga of the same name written by Yuji Terajima. The sport discussed in this anime is Baseball which unlike football or volleyball is not a common sport. Thus, its international popularity has been pretty low even though in Japan itself the sport, as well as this anime, has been extremely popular.

So much so that three seasons of the anime have been released and the manga series is going strong. Another reason for low views is due to the enormous number of episodes as while typical animes in this genre have 12-25 episodes per season Diamond no Ace has 178(75+51+52) episodes in all 3 seasons.

Through this series, we follow the journey of Eijun Sawamura, a boisterous teen a baseball pitcher with a very unique style of pitching that has come naturally. His initial plans don’t even include the prestigious Seidou High school, instead, he desires to continue playing with his friends and someday reach the nationals.

But destiny had other plans for him since a scout from Seidou comes to offer him a scholarship based on baseball so he can play alongside outstanding players to reach the Nationals. Initially reluctant he decides to pay a visit which changes his mindset completely. He decides to join Seidou to improve his skills as well as fulfill his dreams of winning the Koshien.

Throughout the 3 seasons, we see the level of a team that is nationally acclaimed, the level expected of a newcomer, the blood, sweat, and tears of Sawamura along with the rest of the first, second, and third-year players to place among the best in Japan and win a ticket to the nationals.

Eijun has to start right from scratch to fit the team, the pressure, the effort. Everything is a joy to watch and when you get to see the end result I am sure tears will well up in your eyes.

The cast of Diamond no Ace is enormous! This is because the high school baseball team has three strings which are like three levels.

Basically the third-string has the weakest players who have to focus on developing their bodies and basics. The second string is slightly better for the group who are allowed to represent the school in practice matches and other matches when the main team is resting.

Finally, the first string has the ‘Elite’ players who are not only the best in the club but the ones who represent the school mostly.

Furuya: Quite and introverted, talented pitcher, first arch-rival of Sawamura, is also a first-year, loves ice cream, and polar bears.

Haruichi: Another quirky first year, short but crazy talented, uses a wooden bat, Pink hair, only sensible one of the three first years in the first string.

Miyuki: The ‘Meghane’ catcher of the team, genius, cocky brat(tbh he actually deserves to be cocky with that amount of talent), The one who made Eijun want to join Seidou, an all-rounder. (2nd year)

Tanba: Ace of the team in season 1, clean-shaven, a little too delicate for a pitcher,3rd year, Excellent curveballs.

Nabe: One of the few 3rd string members, is a second-year player, Is a pitcher therefore extremely observant, acts as a scout and informant to the team, His scouting skills have been of great help.

What Makes Diamond no Ace work?

To be very honest I had zero knowledge about baseball, plus the number of episodes was also not exciting to me. But I was pleasantly surprised as to how even with all that I fell in love with the series. It felt like such a complete story, usually, such stories focus entirely on practice, winning, losing, tournaments, and sometimes studies.

The point is very compact and focuses on only one direction while Diaya even though similarly focuses on winning, there is hardly anything from diet to team building to adaptability, etc. that it misses.

Physical injuries are shown all the time and usually don’t have severe consequences but a psychological barrier/injury due to a regretful incident? God tier trope used! Team building, breaking and rebuilding within a long span of time showed every issue from personality issues, to extreme pressure, from 1 year to another one everything felt so real.

Snippets of their backstories but enough to make one understand where they are and why they are.The growth of the team, the endless competition within the team itself to make it to the roster. Nothing amiss. Of course, it has its fair share of adrenaline pumping and dramatic scenes but they are never over the top.

Diamond No Ace is a perfect blend of drama, sports, fiction, and realism which I must implore everyone out there to watch with patience. It does not matter if you know anything about the sport or not you will gradually understand the sport as you watch. Don’t let it stop you from watching it.

{Pro Tip: If you know how Cricket is played, then understanding baseball becomes easier cause certain things are similar.}

Hoping that I at least convinced a few to try the anime, which is available on Crunchyroll. Do comment below and lemme know your thoughts on Diamond no Ace, other sports anime that are underrated.