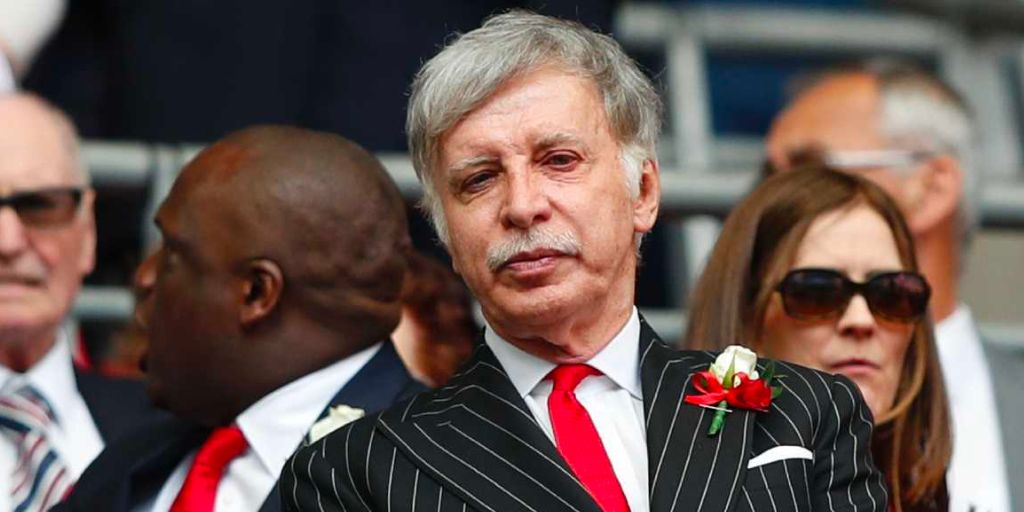 Enos Stanley Kroenke is an American billionaire. He’s majorly known for having shares in real estate as well as a sports mogul of international stature. He is currently the owner of the hugely popular entertainment franchise: the Kroenke Sports and Entertainment. The franchise is the caretaker of many different sports ventures Kroenke. They are- Arsenal F.C. ( both men and women),  Los Angeles Rams (NFL), Denver Nuggets (NBA), Colorado Avalanche (NHL), Colorado Rapids (MLS), and Colorado Mammoth (NLL). But, the list does not end here! Kroenke has also made investments in the gaming world. He has 2 teams: Los Angeles Gladiators & Los Angeles Guerillas in Overwatch league & Call of Duty League respectively.

Truly, Kroenke can be called the Escobar of the sporting world. But, owning a team is not the only thing that he has done, Kroenke has an array of silverware from his team. Kroenke has won 4 major championships in the US, a couple of super bowls and Stanley cups and a lot of Premier League titles with Arsenal. He also has an MLS Cup as well as an NLL cup with him. However, Kroenke has been a person who has been on and off pulled in the whirlpool of controversies as well. But, that doesn’t take away the credit that he is one of the most successful sports barons in the world

Let us have a look at these on and off stories and the life of Stan Kroenke.

Kroenke was born in Mora, Missouri. The locality was a humble dwelling with a relatively very small population. He is a graduate of the Cole Camp High School. His father owned a small lumber company called the Mora Lumber Company. With a keen eye for business, Stan got into the family business from the early age of 10. Stan Kroenke is married to the famous Walmart heiress  Ann Walton. Their chance meets in Colorado and then the eventual marriage has been nothing sort of romantic magic. Over the years, Kroenke is known to have a reclusive personality and does not prefer the spotlight. This has earned him the name “Silent Stan”.

Now, let us look at the capital accumulations of Stan Kroenke

Stan Kroenke: Earnings and Net worth

Talking about the monetary accumulations of Kroenke, he has a whopping net worth of $10.7 billion. According to Forbes, he is the 195th richest person on their list. That’s not all! his wife is also having a huge net worth of $ 8 billion. Her wife’s name is Ann Walton. This name might stick in your mind! well that’s because she is the daughter of co-founder James Walton and niece of Walmart founder Sam Walton.

However, Kroenke has heavily invested in real estate as well. According to the magazine The Land Report, he is the fifth-largest landowner in the country. His latest addition to the collection is the Waggoner Ranch located in Texas. The Waggoner Ranch encompasses a humongous area of 520,527 acres! This huge patch of land was brought at an estimated value of around $ 725 million. He is also the chairman of THF Realty, a real estate company having more than $ 2 billion valuations. Apart from these properties, Stan also owned a winery in Napa Valley which was called Screaming Eagles. This was bought in partnership with the money manager Charles Banks. However, according to a report in 2009, Stan has reportedly sold his shares of the winery for an undisclosed fee.

A billionaire like Kroenke surely knows the meaning of live life like a king size. Apart from all these monetary investments and properties, he owns a host of luxury houses. He has properties in Colorado and Montana. Additionally, he also owns an $ 11.3 million penthouse inside the 5-star Montage hotel in Beverly Hills. But, a recent record has surfaced that the couple is upgrading their former compound. They are paying a reported fee of $ 23.8 million for a larger and lavish penthouse. In addition to all these properties, the prized jewel of Kroenke is the incredible $ 9.6 million house in Malibu. This incredible beachside property was to be the retreat of Dodi Fayed and Princess Diana before their tragic death in an accident. Kroenke acquired the property in 1998 and has been residing there since then.