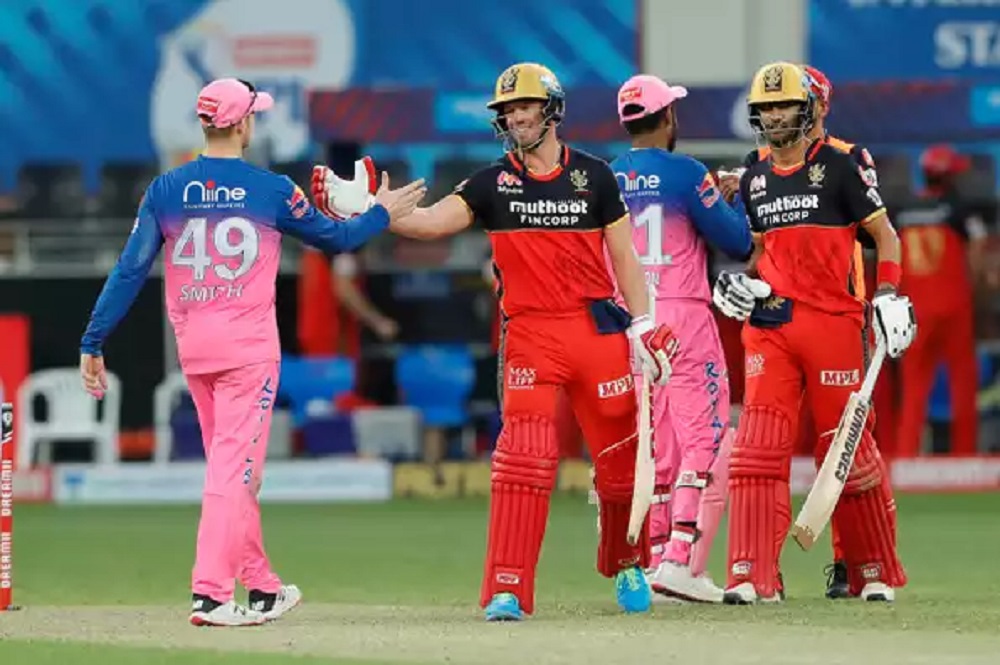 Rajasthan Royals had won the toss and chosen to bat first. Robin Uthappa and Ben Stokes came to the crease to open the innings for their side. They were off to a good start as they got some good runs in the early overs. However, in the 6th over, Chris Morris dismissed Ben Stokes (15 in 19). Even then, Rajasthan Royals were able to get 52 runs from the powerplay after losing only 1 wicket. Soon after the powerplay in the 8th over, Uthappa (41 in 22) also got out. On the very next ball, Samson (0 in 0) also got out. Now, Chahal had a chance to grab IPL 2020’s first hattrick. However, he missed that opportunity as Jos Buttler left the ball to save his wicket.

Now, Buttler and Steven Smith were on the crease as RR looked to get a big target on the board. Both of them were playing brilliantly as they were smashing the RCB bowlers. However, in the 16th over, Morris dismissed Buttler (24 in 25) to break the partnership. Then came Tewatia (19* in 11) who also hammered the RCB bowlers. In the final over, Morris again dismissed Smith (57 in 36) and Archer (2 in 3) to restrict Rajasthan’s total to 177-6 in their 20-over innings.

Devdutt Padikkal and Aaron Finch opened the innings for the Royal Challengers Bangalore side. They got a good start as they were maintaining the required run-rate. However, in the 4th over, Aaron Finch got out at the hands of Shreyas Gopal (14 in 11). Then came Virat Kohli to support Padikkal on the crease. The two had a good partnership of 79 runs until the 13th over when Rahul Tewatia dismissed Padikkal (35 in 37). After that, AB de Villiers came to the crease to finish off the innings with Kohli. However, in the very next over, Kohli also got out. Now, Gurkeerat Singh Mann came to the crease to support De Villiers. RCB needed 76 in 51 balls.

AB de Villiers started a little slow taking singles and doubles as he knew they needed to defend their wickets till the end. Gurkeerat Singh Mann was also doing the same from the other end. Then, in the final overs, they started charging on the RR bowlers. In the 19th over, De Villiers smashed 19 runs while Gurkeerat got 5 runs off the last 2 balls to lower the chase to 10 in 6. Then, De Villiers smashed a six on the third-last ball to Archer to win the match for his team. He had performed excellently a he scored 55* in 22 balls. Gurkeerat had also shown great composure as he supported De Villiers by scoring 19 in 17 balls. RCB had chased the massive total in 19.4 overs with 7 wickets in hand.

AB de Villiers won the Man of the Match Award for his electrifying innings of 55* in just 22 balls. The South-African is a versatile player and proved it once by performing for his team when they needed him. Even though there was no change in the points table after this match for both the teams, RCB is now tied with Mumbai Indians and Delhi Capitals at 12 points. They are in the 3rd position just because of their low net run-rate. On the other hand, RR is stuck in the 7th position with 6 points and a net run-rate much lower than that of CSK and SRH. Anyhow, now RCB will be facing KKR in their next fixture whereas RR will be up against CSK.