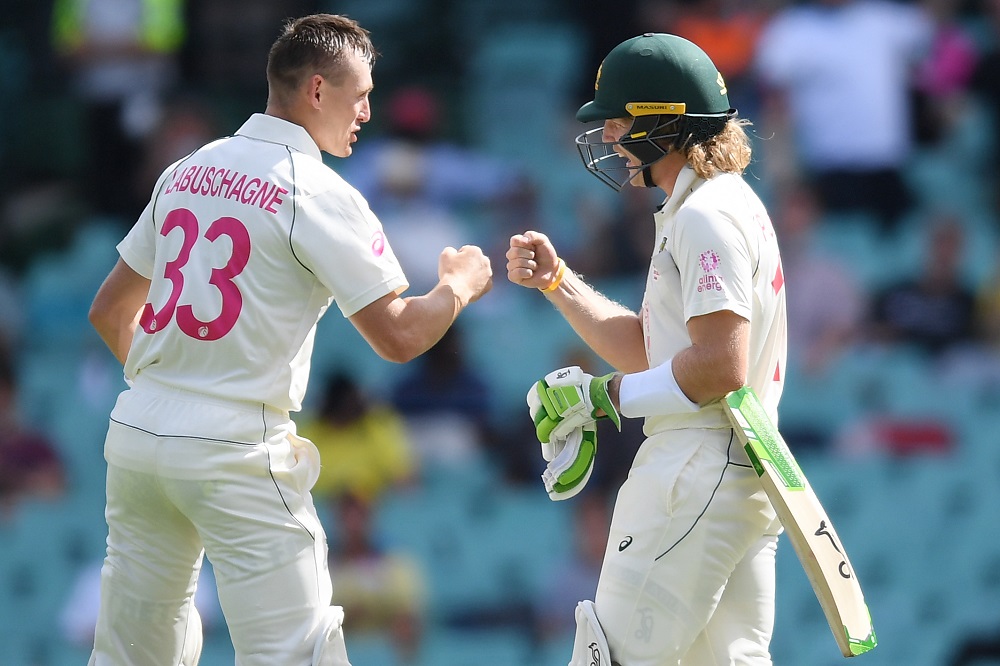 Will Pucovski (right) and Marnus Labuschagne (left) gave the Aussies innings a boost with their respective half-centuries.

Today began the 3rd test match between India and Australia at the SCG. It is the third match of the Vodafone Test Series which is currently tied at 1-1. The hosts won the first test match after crushing the Indian batting lineup at the Adelaide Oval. India got all out at a total of 36 in their second innings to register their lowest ever test match total. However, they didn’t give up and made a historic comeback to win the second test match at the MCG. Consequently, they had managed to level the series at 1-1. Now, with a win in the third test, they could defend the Border-Gavaskar trophy without any worries about the 4th test match. So, both the teams came all prepared for the third test match as it began.

The match began as Australia won the toss and their skipper Tim Paine opted to bat first. They wanted to set up a big target for the Indian batsmen so they could get them all-out quickly and then give a follow-on. So, David Warner and the debutant Will Pucovski came to the crease to open the innings for Australia. They didn’t get a really great start as in the 4th over itself, David Warner (5 in 8) got out. Consequently, Marnus Labuschagne came in at 3 but Warner’s dismissal didn’t seem to affect him or Pucovski. They were batting calmly and didn’t let the pressure get to them. However, soon the play was ruined by rain as after 7.1 overs a burst of shower came in and the covers had to be pulled over the pitch.

The rain finally stopped after 4 hours and the play began directly with the second session. Labuschagne and Pucovski were looking even more confident and were playing brilliantly. They were building a great partnership and managed to get their team total to 93-1 at the end of 31 overs before the umpires declared tea-time. However, immediately after the tea break, the duo managed to get their partnership to 100 in 185 balls. But, Saini then struck on his debut to dismiss Pucovski (62 in 110). As a result, Steven Smith (31* in 64) came to the crease. He was in great form as he batted till the end of the day with Labuschagne (67* in 149). They had managed to get Australia to a total of 166-2 in 55 overs by the end of Day 1.

Can the Indian bowlers manage to restrict the Australian batsmen on Day 2?

The Australian batsmen showed great composure as they batted through the entire Day 1. Despite the loss in the 2nd match, they didn’t let the pressure get to them and played excellently. Will Pucovski had the perfect debut as he smashed 62 runs in 110 balls. Apart from him, even Saini started off great as he got a wicket after giving away 32 runs in 7 overs. Anyhow, the players will be returning on Day 2 i.e. tomorrow to continue with the match. India will be looking forward to get Australia all-out whereas the hosts will want to set up a huge target for the visitors.