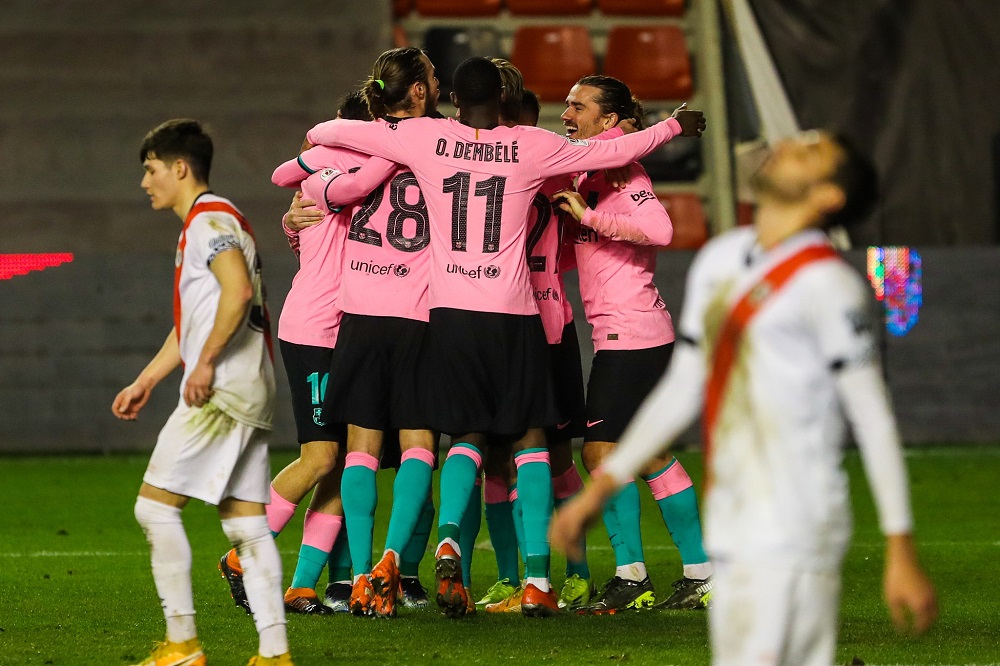 Yesterday night, Barcelona locked heads with Rayo Vallecano in the Copa del Rey Round of 16. It was going to be a really interesting game as the winner would proceed to the quarter-final. So, both the teams would give their best to try and get through this round. However, things were not going to be easy for either of them. Barcelona was going up against Rayo Vallecano away from their home at Estadio de Vallecas. Consequently, Rayo Vallecano had the home advantage. On the other hand, Lionel Messi’s 2-match ban was over and the 33-year old Argentine was all fit to participate and present in the starting 11. As a result, it was going to be a really exciting and thrilling game.

The match began as Barcelona kicked off and they were playing their standard possession game from the beginning of the game. However, it didn’t take them much time to start creating chances. In the 1st minute itself, Griezmann released Firpo down the left flank and the left-back put in a great low cross into the 6-yard box. But, Mingueza failed to get a good touch on the ball. Consequently, the hosts got a goal-kick. Even after that, Barcelona continued dominating the possession and were creating chances one after the other.

The Catalans’ two brilliant attempts were denied by the post. One of them came from De Jong’s sliding attempt on a great cross from Firpo. His effort hit the crossbar and went straight into Dimitrievski’s hands. The other attempt came from Puig whose shot took a deflection of the Vallecans’ player and then hit the crossbar.  However, this didn’t let Barcelona’s morale get down but rather motivated them to dig deep and look for a goal. Anyhow, the first half came to an end as the score was still tied at 0-0.

The second half began and Barcelona was once again trying to get a goal by creating chances one after the other. However, it was Rayo Vallecano that scored the first goal of the game. In the 63rd minute, Fran Garcia scored an easy tap-in goal to give his side a lead. Alvaro Garcia dribbled from Lenglet and attempted a shot on the goal. Neto was able to get his hand on it but the ball went straight to Fran Garcia’s feet. The midfielder tapped it in to give the hosts an easy lead.

However, it didn’t take the Catalans much time to make a comeback. In the 69th minute, Lionel Messi scored the equalizer for his side. Busquets played an extra-ordinary pass to Griezmann who dashed down the left wing before passing the ball to Messi. The Argentine made no mistake as he tapped the ball into an empty net.

Consequently, the match was once again tied, but now at 1-1. So, both the teams unleashed their attacks to get that winning goal. Finally, in the 80th minute, De Jong shone for his side yet again. Messi created an opportunity by putting a through ball to Alba who set up the Dutch midfielder with a low cross. De Jong got away from his marker and tapped the ball in past Dimitrievski. With his goal, Barcelona paved their way to an outstanding win. That was the final and deciding goal of the match as Barcelona emerged victorious in a 2-1 win.

With this victory, the Blaugranas moved on to the Copa del Rey quarter-final. Now, the Catalans will have to wait to see who they will be facing in the next round. The draws for the next round will be conducted on 29th January, 2021 at 13:00. The Spanish Football Association will be conducting them at the headquarters of the Spanish FA in Madrid (13:00). Anyhow, the Catalans will now be preparing for their next league game i.e. on 31st January against the Athletic Club of Bilbao. After that, they will set their minds towards the next round of Copa del Rey on 4th February.