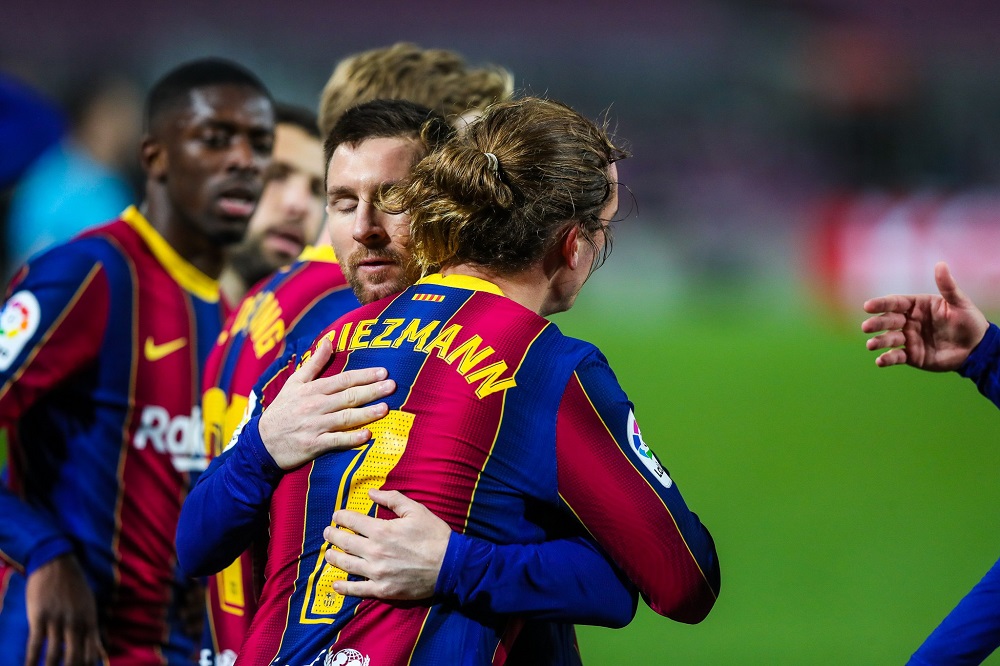 Barcelona took revenge against Athletic Club with goals from Messi and Griezmann to climb above Real Madrid in the points table.

Yester day night, Barcelona hosted Athletic Club at the Camp Nou for their 20th fixture of this season. It was going to be a really exciting game since the two teams were facing each other for the third time this month. They met earlier in the first week of January at Athletic Club’s home ground i.e. the San Mames Stadium for their league fixture. Athletic Club lost that match by a score of 3-2. However, they won the second match between these two teams i.e. the Spanish Supercup final in extra time by the same score (3-2). Consequently, everyone was pumped up for the final match of this fixture-trilogy and to see who would have the last laugh.

The match began as the Catalans kicked off and they were keeping the possession to themselves from the beginning. It felt like Athletic Club was going easy on them as they didn’t press from the start. Barcelona made full use of this as they were creating chances from the start looking for an early goal. In the 5th minute, Messi had a one-on-one chance with Unai Simon after a great pass from Griezmann. However, the Argentine forced out a great save from the Athletic Club goalkeeper. So, the Blaugranas seemed to be in a good form but took time to open their scoring.

In the 18th minute, Messi won his side a freekick a few yards outside the box. An Athletic Club player had pushed him, seeing which the referee immediately blew his whistle. Consequently, the skipper took the freekick himself and curled it in marvelously to get the first goal of the game for Barcelona. He put the ball into the top right corner far away from Unai Simon. Dani Garcia who had positioned himself for the right post also couldn’t stop the ball. With that, Barcelona got into a 1-goal lead and managed to hold onto it until the end of the first half.

The second half began and now Athletic Club was looking desperate for an equalizer. However, Barcelona was not letting them break their guard so easily as even the hosts were creating chances one after the other. However, it was still the visitors who got the first goal in the second half. It was an own goal from Alba after he was trying to clear out Raul Garcia’s cross inside the box. Ter Stegen tried his best to get to the ball but failed to keep it out of the goal. Consequently, the visitors had now tied the game at 1-1.

The match continued as Athletic Club seemed to have boosted by that equalizer. Both the teams wanted all 3 points from a win in this game and hence, they kept fighting. The Catalans created many chances but failed to convert those. Pjanic took a great header in the 58th minute after a brilliant cross from Griezmann. However, Simon made a diving stop to deny the hosts. Finally, in the 74th minute, Barcelona got their winning goal. Dembele released Migueza down the right flank with a brilliant pass. The right-back then put in a low cross to Griezmann who was on the edge of the 6-yard box. The Frenchman scored an easy tap-in to give the Blaugranas the lead once again.

That was the last goal of the match which helped the hosts clinch victory over Athletic Club. The Catalans got their revenge against the visitors after they had lost to them in the Spanish Supercup final. The visitors did show up with some incredible chances in the final minutes and excellent crosses. However, Barcelona managed to keep the danger out. With this victory, the Catalans also managed to climb to the 2nd position in the points table above Real Madrid. On the other hand, Athletic Club moved down to the 11th position as Celta moved above them after their draw against Granada yesterday. Anyhow, the two teams will now be preparing for their upcoming Copa del Rey games in midweek. Barcelona will be locking heads with Granada whereas Athletic Club will be going up against Real Betis.