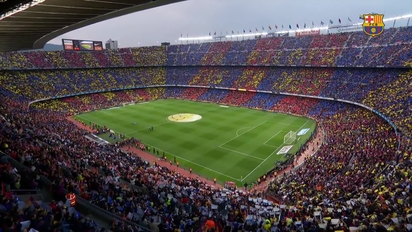 Finding Best Football Stadiums is not an easy task. Other than just the size of the stadium, there are a lot of other factors that are involved in making the Best Football Stadium. The fans inside the stadium play a huge part, other than that, the ambiance that is created, how noisy or quiet it is, everything matters. This is, again, just my list, based on the football that I have seen. There are thousands of football stadiums in the world, and only 6 made the list. Historical significance also adds to the stadium’s value. If your favorite stadium doesn’t make the cut, then you are free to post your opinions as well.

Usually, the European clubs and their stadiums have made it to the list, but there will be special mentions as well. Stadiums are all about representing what the club stands for, its ideology, work ethics, and its progress. There are many stadiums in the world which are completely opposite of what a team is all about. These types of mistakes are also a part of sports in general. A variety of stadiums have lost the touch or the so-called attitude in order to have some sort of connection. This leads to fans not being willing to be a part of the club, hence the financial problem. Well, these are some really extreme situations, and none of it is happening to our football clubs.

If you are wondering why De Kuip is on the list of Best Football Stadiums,

just have a look at the atmosphere in the link below.

Even though it is not as massive as other stadiums, there is hardly any other stadium that can match Feyenoord’s volume. At a capacity of 47,500, this stadium can erupt more than anybody else in the world. On special nights, maybe a Champions League night, the atmosphere is next level. Also, Feyenoord has a very rich history, and the fans like to celebrate it to the core. A place to visit for sure if you are a football fan.

There is hardly any doubt I feel to consider Anfield one of the best football stadiums. Just the feel to represent the red jersey in Mersyside, represent a legendary club, and be a part of history. When you realize the likes of Steven Gerrard, Xabi Alonso, Fernando Torres, and Luis Suarez have all played inside the stadium. Just unbelievable! How can we forget the fans? And their all-time song, You Will Never Walk Alone. A type of club and the stadium you wish to play and die for.

Anfield has a seating capacity of 53,394, currently the seventh-largest stadium in England. It has been this home of Liverpool since the beginning, in 1892. The stadium has four main stands. The Spion Kop, the Main Stand, Sir Kelly Dalglish Stand, and the Anfield Road End. Just outside the stadium, there are two statues of legendary Liverpool managers, Bill Shankly and Bob Paisley. With too much history and success around the club, it is definitely worth visiting.

Such a successful club, with so much history and fans all around, makes its way to one of the Best Football Stadiums. Old Trafford is famously known as the theatre of dreams, and yes, so many dreams have come true here. This place is electrifying, and all that has happened here created so many memories that it was 100% to make the list. Many greats graced this iconic stadium. Starting from Sir Bobby Charlton to Eric Cantona, to the entire ‘class of 92’ gang. Afterward came Rooney, Cristiano Ronaldo, and so many other players. They are the only club to win the league title a maximum number of times ever since the premier league began. With a capacity of 74,140, it is the largest club stadium in the United Kingdom.

Ever seen a huge Yellow- Wall behind a goalpost? If yes, then you are right, it is the Borussia Dortmund stadium. The most iconic wall of any stadium in the world. It is so iconic that it looks like a mountain behind the goal. No matter what the situation is of the club, good or bad, they make sure they are always behind their team, thus the wall. It is a great sign of unity in any situation whatsoever. For official reasons, the stadium is called the Signal Iduna Park, and it is a dream to be there in the stadium with the fans. The capacity of the stadium is 81,365, but the highest recorded attendance has been 83,000.

Credit to all the fans of Galatasaray to make this stadium a spectacle at times. They will do the craziest things to create a hysteric atmosphere, almost hell for the visiting team. Especially if it is a match, then the fans have an extra responsibility to be more creative. This stadium can host up to 52 280 spectators. Whatever I have mentioned about the stadium, be there to believe it. Truly one of a kind!

This is my personal favorite stadium out of all the stadiums in the world. Something about two old clubs, one of the biggest clubs sharing a single stadium, has a charm that seems unbeatable. On top of that, Milan is the city where they battle it out. The atmosphere is euphoric there. As someone rightly said, “There are no cheers in San Siro, there are roars inside San Siro”. The atmosphere during the Milan derby is so pleasing to the eyes. Half of the stadium is red, and the other half is blue. The players that have represented the teams during the derby are complete legends. There was a time when both the teams had set up World XI against each other. That level of football this stadium has witnessed. San Siro was a thing, is a thing, and will remain a thing forever.