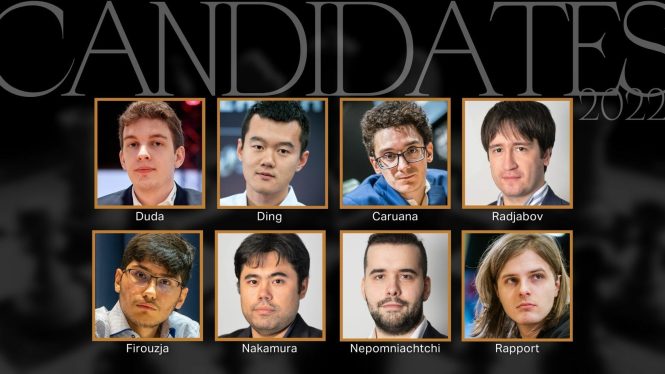 FIDE Candidates 2022 is coming towards its last lap, and Nepo just managed to survive against Fabiano Caruana. Hikaru Nakamura, on the other hand, faced a defeat at the hands of  Teimour Rajdabov. He looked emotional after the defeat as he was certainly closing in on the top two of the tournament. As for Rajdabov, it was his first classical win in the Candidates. Again Ian looks to be in control of the leader’s table. He is an inch closer to being a back-to-back candidate for the World Championship, which is scheduled for next year. However, there are still 5 rounds to go, and anything is possible to happen.

It was a day of wins mostly, Alireza Firouzja also scored a win against the Hungarian GM Richard Rapport. Whereas, Ding Liren scored a win over Jan-Krzysztof Duda. With 6.5 points, Ian maintains a point lead against the number two Fabiano Caruana. Caruana is 5.5 points in second place, followed by Hikaru Nakamura at 4.5. With the win, Ding is also at 4.5 points and fourth in the table. Radjabov, Alireza, and Richard are tied at 4, with Duda at the bottom with 3 points. Furthermore, the coming rounds are very crucial in deciding the outcome of the Candidates. Anyone’s victory against Ian can change the outcome of the tournament in a very dramatic way. The fans are expecting a twist to happen soon.

Let’s take a look at the matches for a clearer idea.

Also Read: Hikaru Vs Fabiano Candidates 2022: Battle Of The Americans- Who Came Out On Top?

The top two were against each other in round 9 of FIDE Candidates 2022, which was supposedly a tough battle. To everyone’s surprise, Ian started with Caruana’s favorite, The Petrov Opening, which left everyone in shock, including Fabiano. It looked as if the American was still not over his defeat against Nakamura in the previous round. He seemed a little shook, and the game progressed slowly. Fabiano’s reply to Ian’s opening was quite an impressive one. Probably for the first time in the tournament, Ian looked a little stumped. Later he even revealed, “I couldn’t recall any of my prep because surely I have some, but I just decided to play on my own, which I think was not the optimal way.” As the game progressed, Fabiano looked in control of the match. Everyone started thinking that it might be the first defeat for Ian, and it did look that way. So many minutes were spent in a single move, Ian was trailing in the match by quite a bit. Looked like Caruana would equal the points tally, and he was really close to doing that.

Unfortunately for him, he was not able to convert his great position into a win. Ian took the opportunity and drew the match, still maintaining the one-point lead going into round 10.

Having won an amazing game in round 8, Hikaru was unable to keep the momentum going. He defeated his fellow countrymen in round 8 of FIDE Candidates 2022, Fabiano, in such epic fashion. Moreover, he looked confident enough to reduce the gap between him and the top two. Unfortunately, it didn’t happen. He lost the game and gave the first win to Teimour Radjabov in the Candidates. He looked teary-eyed after the game ended. Not a pleasing sight to see for his fans.

Looking forward to Round 10 of the FIDE Candidates 2022. Hoping for a nice turnaround.