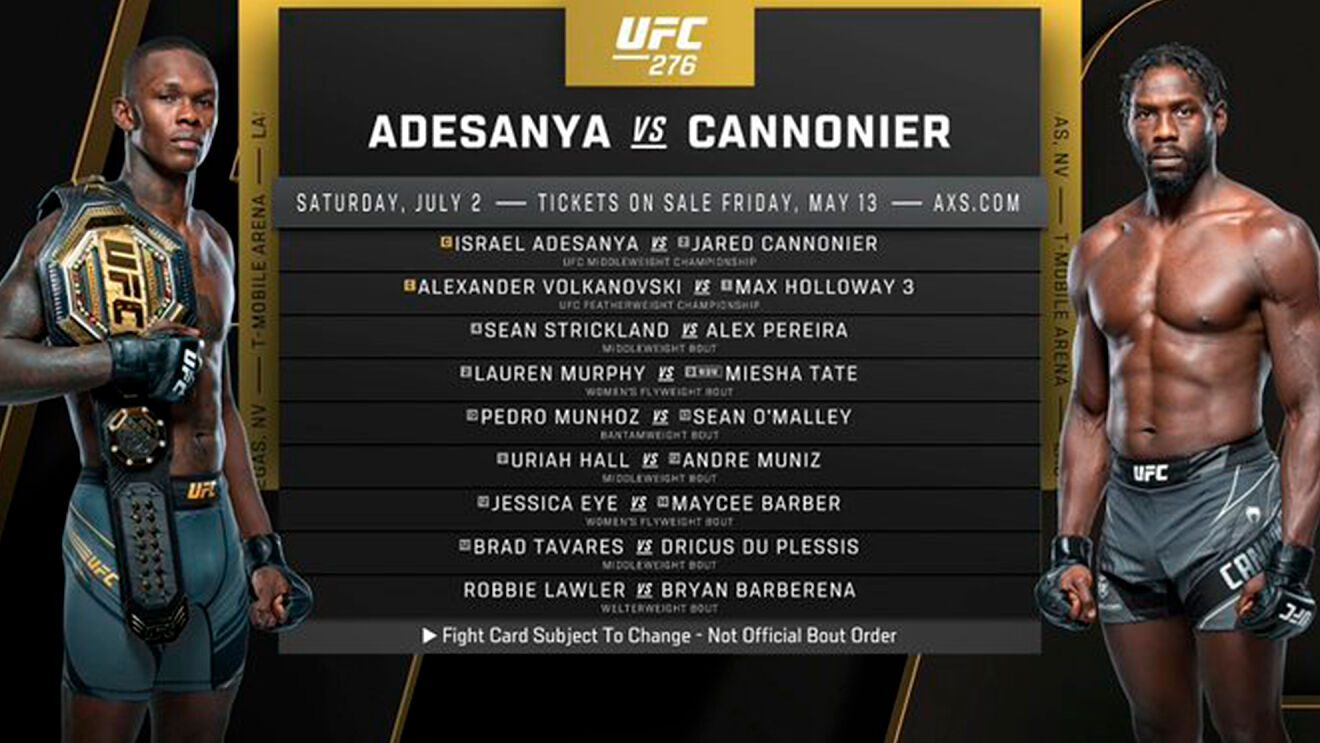 UFC 276: Adesanya Vs Cannonier And Volkanovski Vs Holloway III

UFC 276 is coming, and the main event has started grabbing all the major headlines. Our Freestyle Bender, Israel Adesanya, is coming back to defend his middleweight title against a fiery-looking Cannonier. This is the main event, but the co-event looks almost as exciting as the main event. Alexander Volkoanovski, the Australian Magician, will be facing Max Holloway, the never-tiring British. Very difficult to distinguish between the main event and the co-event because both look so good. It is almost a crime to call the second a co-event. Alexander and Max will be fighting it out for the featherweight title. Max Holloway is looking to end Alexander’s reign at the top.

Adesanya has a record of 22 wins and only one loss in his professional career. That too came when he tried to compete at light heavyweight. Whereas Connonier has a 15-5 win-loss ratio at a professional level. Alexander has an impressive 24-1 win-loss record, and Max’s record stands at 23-6. But this does not necessarily prove anything because we all know how genuinely good this fight is going to be. How close this fight is going to be is also not a question. As good as champion Alexander is, Max is also a terrific fighter, with one of the best chins in the UFC. He just doesn’t know when to give up. Most of his losses have come in after the end of rounds and have hardly ever been knocked out.

We will have a deeper look at the statistics of each fighter and their fights.

Also Read: UFC Fight Night: Calvin Kattar Vs Josh Emmett, Where To Watch In The UK, US, Australia

Adesanya vs Cannonier at UFC 276 is coming in as the main event of the night. Adesanya has not lost even a single fight in the middleweight division and is the superstar of this association. He is an entertainer, a complete package, and will definitely provide a great show for the audience. That is guaranteed! If we compare the two fighters, Adesanya has a definite height advantage. He is 6-4 compared to Cannonier’s height of 5-11. This is a massive 5-inch advantage. Because of this, he has a two-and-a-half reach advantage. According to many experts, even an inch advantage is massive in a fight, here, he has so much. In leg reach, he has a 3-inch advantage as well. Looks like Adesanya has all the boxes ticked.

This co-main event is going to be bonkers. Such an equal fight it looks like. Alexander is looking to defend his title again, and Max cannot wait to have his hands on it. As far as the statistics go, Max is 5 inches taller than Alexander, an advantage for sure but lacks in reach. Alexander has an almost 2-inch reach advantage over Max, considering Max is 5 inches taller. But leg reach is where Max leads, 6-inch leg reach advantage. TKO, Submission, and Decision percentages are also almost the same. So like I said before, this fight is very equal, and it will be difficult to say who will come out on top.

Also Read: UFC Fight Night: Calvin Kattar Vs Josh Emmett, Where To Watch In The UK, US, And Australia