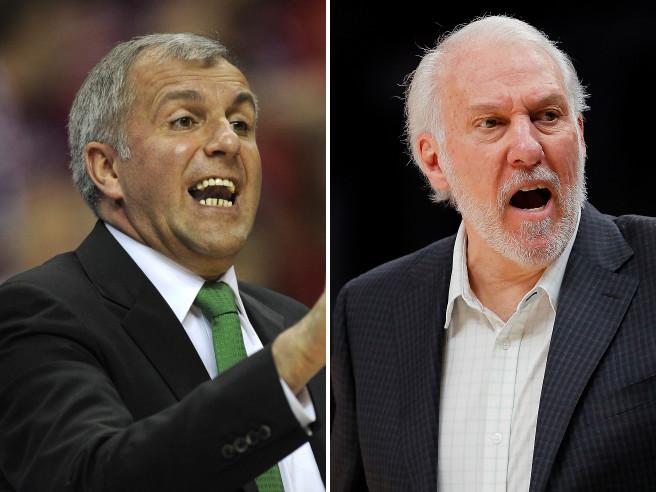 Gregg Popovich and  Želimir Obradović are the most popular coaches in the world right now. Without a doubt, both of them have won enough in their lives to put a tag like that. They don’t say it, but we know how good they are. The best thing about them is how similar they are but stay so far away from each other to actually connect something. One has dedicated his entire life to the NBA, the other has stayed in Europe all his life. But both of them have one thing in common, their love for the game and their passion for their work. Their coaching style might be completely different but they both work for the same goal. Whichever team they coach, it has to become the best team.

Gregg Popovich has been the coach of the San Antonio Spurs. He has given more than 20 plus years to the same team, and at one time it dominated the NBA. Since there are a lot of ups and downs in the game and your career, the coach has seen his fair share of lows as well. That is all part of the process, of being at the top of the mountain. Želimir Obradović is considered the best coach in Europe. The 62-year-old has managed some of the top European teams and has won numerous titles with them. He is someone who just shows aggression and demands a lot from his players. Probably the reason why he and his team won so much.

The President of San Antonio Spurs, Gregg Charles Popovich, popular known as Pop, is an American Professional coach. For two seasons now, he has been the president as well as the head coach of the NBA team. Popovich was born on 28 January 1949, currently 73 years old. He comes from East Chicago, Indiana. At a young age, he studied Soviet Studies and was a part of Air Force Intelligence training. Later he took on physical education as a profession and took a master’s degree in it. He worked as an assistant coach for San Antonio Spurs and later for the Golden State Warriors. In 1996, Gregg Popovich became the head coach of the San Antonio Spurs.

As a head coach, he has had tremendous success. He is instrumental in making careers of young players such as Tony Parker, Tim Duncan, Manu Ginobili, and Kawhi Leonard. He has won five NBA titles as a head coach with the Spurs. Their last title came eight years ago, in 2014, and since then, the team has gone into a transitional phase. The retirement of players also caused this to happen. But now, the team is in the re-building phase and Gregg has also become the president of the organization.

Arguably, the best coach in European history has to go to Želimir Obradović. He was born on 9 March 1960 in Cacak, Serbia. He is also a former Serbian Basketball player, and now a coach of KK Partizan in the ABA League. Before this, he has managed a lot of top European teams and won so much. He has had a record 14 Euroleague final appearances and a record 18 semi-final appearances. He has coached teams like Real Madrid, Fenerbahce, and Pananthanaikos to name a few. He coached Pananthanaikos for almost 13 years and Fenerbahce for 7 years. He never hides his emotions and when he is angry, his players will have to listen, no matter what.

These two coaches are definitely the living legends of our basketball community.

Also Read: Intenational NBA Stars: Let’s Have A Look At Them