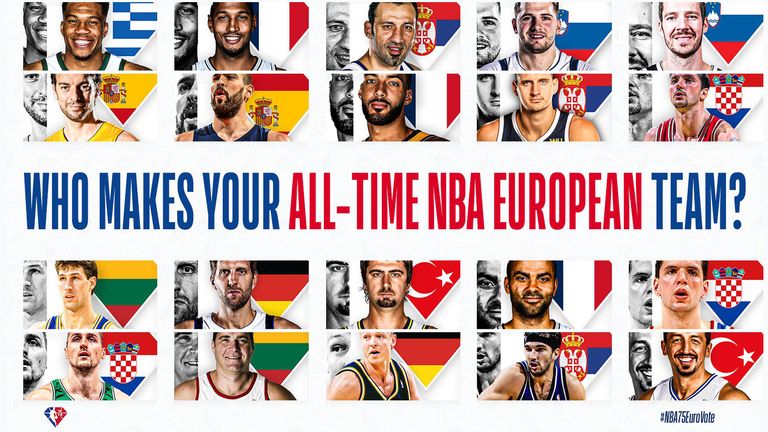 International NBA Stars: Let’s Have A Look At Them

There are a lot of International NBA Stars playing in the league, which has brought in a lot of global attraction. Not saying NBA didn’t have enough traffic from outside of America, but these players have brought their own value to it. With some special charm and X factor these players have, it has automatically created a niche of its own. Players like Giannis Antetokounmpo, Luka Doncic, or Nikola Jokic have some serious popularity. However, the majority of the American players are still the face of the league, international players are also making the cut. As long as the internet keeps growing, it is better for the international players, as well as the league.

The NBA is a massive league, the biggest basketball league in the world, and played in the best basketball nation. However, different flavors of the game were still missing. The introduction of international players has surely done that. Basketball played in Europe is different from that in the US. In Europe, it is a lot more technical and more passing game. In the US, the players are so naturally gifted that their individual quality just beats everyone. It looks as if they are born to Bball. Other parts of the world bring in other features of the game. All mixed together, makes NBA the best in the world, where everyone wants to be.

Probably the biggest amongst all the International NBA Stars, Giannis Antetokonmpo makes the most headlines. Known as the Greek Freak, Giannis made his entry into the NBA like a storm. He is 6’11 and has a slim build, not like the other bulky guys. This is the reason he is fast and agile compared to other players his size. He is an athletic machine and a powerhouse. Giannis is born to an African father and a Greek mother. He started playing as a professional in Greece before being drafted by the NBA. Milwaukee Bucks picked Giannis, and for seven seasons, he has been a part of the franchise.

With Bucks, Giannis won the NBA Championships last year, their first title after so many years. He has also been awarded Defensive Player Of The Year and the league MVP. Many people believed that he is an American because of the way he looks, but he represents the Greek National Team in international tournaments. He has garnered a lot of fan following from all around the world, including the US and Greece.

Joel Embid hails from Cameroon and has become one of the biggest International NBA Stars. His background has been extremely poor, and this is more reason to respect him. He has risen from poverty, has come a long way, and is a crucial player for his team. He represents the Philadelphia 70sixers and is probably their best player. He has been in the MVP race for a few seasons now, each time losing to a player or two. He is a complete player, he can shoot, he can dunk, he can pass, and moreover, he is a perfect team player.

Joel Embid and his 70sixers team have often come close but are not able to win anything yet. They have come close a couple of times in the past but still have a long way to go.

Luka Doncic or Luka Magic is certainly the present and future of the NBA. Representing the Slovenian National Team alongside another superstar Dragic, Luka is by far the best young talent in recent years. He took the league by storm when he joined the Dallas Mavericks in 2018. He posted great numbers in his rookie season, and we all knew that this kid is something special. Doncic’s following season was insane, and he quickly became an all-star. He also guided his team into the playoffs, where they lost against the Clippers. His third and fourth seasons have been incredible as well, his individual stats are going off the roof. There is no way to stop him when he is on the run.

Luka Doncic has now become the main focus of attention in the Dallas team. Under Jason Kidd’s coaching, Dallas is looking to form a great young team, and the team had a really good post-season. Doncic, along with other teammates, only lost to the Golden State Warriors in the West playoffs.

Ricky Rubio is a veteran Spanish player now, but he is only 32. It is because of the fact that he made it big so early in his career. He was Spain’s main point guard at the age of 17 when they faced the USA in the final of an Olympic Gold Medal match. Such has been his reputation as a basketball player. For almost a decade, he has been playing in the NBA and has represented many teams. With Spain, he won the 2018 World Cup, defeating France in the final. Ricky was arguably the main player on the team and has been their prime player for so many years now.

Rubio also became the youngest player to ever play in the Spanish ACB league. At age 15, he made his debut for the senior team, DKV Joventut. In 2011, he played in the NBA for Minnesota Timberwolves. He was a part of the team till 2017, and then he was traded to the Utah Jazz for two seasons. In the 2020/21 season, Ricky Rubio had another stint with Minnesota before leaving for the Cavs. There, he spent most of the season being injured on the sidelines. In 2022, Indiana Pacers announced that they have completed the trade of Ricky Rubio.

Nikola Jovic or The Joker, is a Serbian Basketball player playing in the NBA for the Denver Nuggets. He is the reigning MVP in the league for his outstanding performance in the regular season. Jovic single-handedly carried the team to the playoffs last season, and his stats were way above the rest. He averaged a triple-double in almost every second game, and this is the reason why he won the MVP award. He is such a great asset for any team because he is a complete player. Except for his speed, he has all the best qualities. No other player can have such passing range than Nikola. A perfect figure to be in a basketball game.