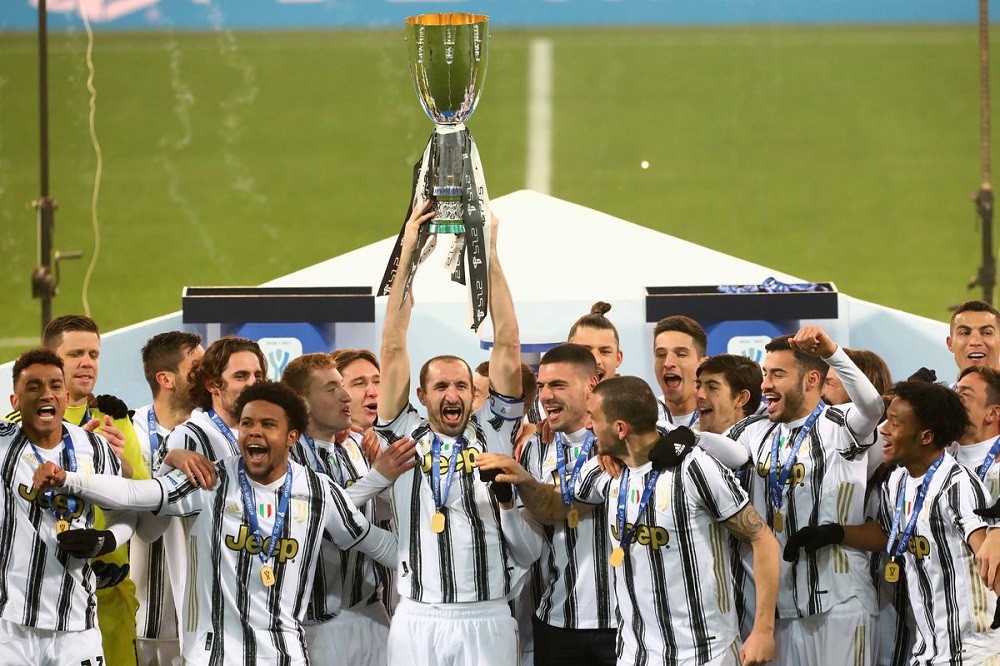 Juventus crowned as Supercopa Italiana champions after their 2-0 victory over Napoli.

It was time for Juventus to lock heads with Napoli in the Supercoppa Italiana finals at the Stadio Citta del Tricolore. Juventus had qualified for the final by winning Serie A while Napoli’s Coppa Italia success had led them to this prestigious occasion. Juventus made four changes to the side that suffered a disappointing defeat to Inter Milan last time out. Consequently, Pirlo decided to drop Frabotta, Ramsey, Rabiot, and Morata. On the other hand, Napoli beat Florentia 6-0 on Sunday, and hence, they made just one change Hysaj made way for Di Lorenzo. The Serie A defending champions had featured in each of the last eight super cups, winning the trophy on four occasions. After the humiliating loss to Inter Milan on Sunday, Juventus needed to bounce back as quickly as possible.

The match began as Napoli got the first half underway. However, Bentacur snatched the possession right away from Zielinski and Juventus proceeded to pass it around the back cautiously as they settled into the game. Both sides started with a pedestrian tempo in possession as they looked to avoid making any early mistakes in this final. In the 10th minute, Kulusevski and McKennie worked a clever interchange down the right flank allowing the former to cut back a neat cross to Arthur who curled a decent shooting opportunity well over from the edge of the box.

Juventus swept forward with another flowing move that ended with Ospina saving a brilliant effort from Chiesa. However, the linesman quickly raised his flag, and hence, the goal wouldn’t have stood anyways. Juventus were looking really bright early on. There were concerns that they would still be reeling from that defeat against Inter Milan on Sunday. However, the Turin-based giants had quickly stamped out any worries so far. Insigne darted inside from the left flank and drilled a skidding low cross into the box that flicked off Szczesny before ricocheting against Petagna and away to safety.

Napoli had responded well after a nervy start. Juventus had been dominating early on in the game. However, Napoli had gradually settled and now they were beginning to look threatening in attack. In the 40th minute, the attacker cut inside and the ball went onto Ronaldo’s potent right foot, before shaping a deft effort across Ospina and just wide of the far post. With that, the referee whistled half-time as the score was still 0-0 after a nervy first half in the super cup. Juventus had controlled the half enjoying more possession and more shots than Napoli. However, both the teams were playing in a risk-averse style.

The second half began as Juventus kicked off now and they almost took the lead immediately. McKennie got to the byline before dinking in a cross. Bernardeschi stabbed towards goal only for Ospina to scramble over and drag it off the line. That was almost an instant impact from Bernardeschi. Chiesa had endured a quiet opening 45 minutes. However, his replacement quickly managed to get involved with the chance. Juventus had built pressure on Napoli as they had managed to get two shots from inside the box in the opening minutes of the second half itself. Ronaldo hit a speculative volley from 30 yards. His effort was deflected off Bakayoko and limply into the arms of Ospina.

However, soon enough Juventus got their well-deserved lead. Bernardeschi swung in a dangerous corner that ricocheted off Bakayoko and into the path of an unmarked Ronaldo. The Portuguese forward smashed a close-range finish gleefully into the roof of the net. But, Napoli still had a chance and soon they got lucky. In the 78th minute, the referee awarded Napoli a penalty as Mertens went down under a clumsy challenge from McKennie. Although the referee initially waved play, after taking a look on the VAR, he decided to award a spot-kick. Insigne, the Napoli skipper stepped up and stuttered as he sent Szczesny the wrong way. However, he placed his effort wide of the left-hand post.

Finally, in the injury time, Morata sealed the day for Juventus. Cuadrado raced through on goal on the counter before knocking it selflessly around Ospina and into Morata’s path. The substitute striker then tapped into an empty net to seal the win for his side. With that, the match ended as Juventus had emerged victorious after an outstanding 2-0 win. They had won their historic 9th Supercopa Italiana title. Anyhow, there’s still a long way for them to go in the league as they are currently in the 4th position in the points table, 7 points short of the table-toppers AC Milan with an extra game in hand. The same goes for Napoli as they are in the 6th position.