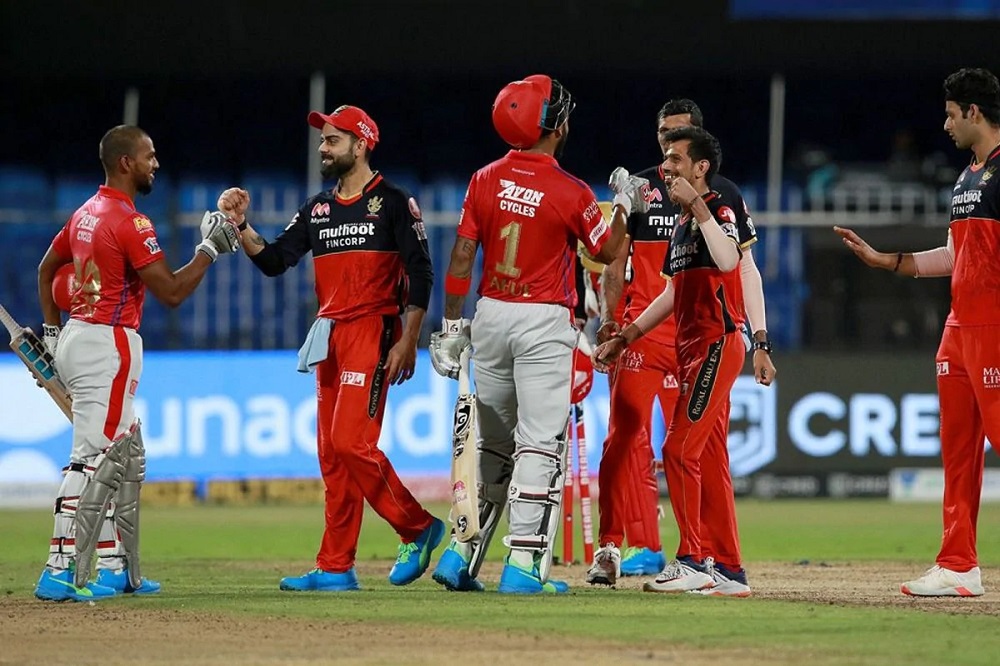 It’s mid-October and we are done with the first half of IPL 2020. The second phase has begun as the teams will be once again combatting against each other. Yesterday, we got to see another such fixture as Kings XI Punjab were locking horns with Royal Challengers Bangalore. The teams had faced each other previously in matchday 6 on 24th September. At that time, KXIP had crushed RCB in a 97-runs victory and all credit went to KL Rahul who smashed 132* in 69 balls.

However, the sad part is that KXIP had won only that match. They have lost all the other matches to fix their spot at the bottom of the points table. On the other hand, RCB was in the 3rd position with 10 points just behind MI due to their low net run-rate. But, now they had a chance to redeem themselves as they faced KXIP. RCB could avenge themselves but they also had another challenge coming up. The KXIP skipper Rahul had included RCB’s former player Chris Gayle in the playing 11. Gayle had been a bit sick for the last few weeks but was now ready to pounce upon the bowlers like he used to do earlier.

RCB won the toss and their skipper Virat Kohli opted to bat first. The match was being held in Sharjah Cricket Stadium which is small and the RCB captain wanted to put up a big target for the Kings to put pressure on them. So, Aaron Finch and Devdutt Padikkal came to open the innings for RCB. They started smashing the KXIP bowlers as they hit fours and sixes continuously. However, Arshdeep Singh soon broke the partnership as he dismissed Padikkal (18 in 12). Then came skipper Kohli himself and everyone was expecting a big knock from him. He started off slow as he did not want to lose another wicket in the powerplay. However, soon after the powerplay in the 7th over, M. Ashwin bowled Finch (20 in 18). After this, Kohli asked Washington Sundar to come in at 4.

Sundar (13 in 14) came and played a few balls but then got out in the 11th over. Then came Shivam Dube and everyone was shocked to see this as Kohli had promoted Shivam and Sundar ahead of AB de Villiers, RCB’s star hitter till now. However, Dube silenced everyone as he smashed 23 in 19 before getting out in the 16th over. Finally, the moment had come and De Villiers (2 in 5) came to the crease. However, the South-African soon returned to the pavilion after getting dismissed in the 18th over. In the same over, Kohli (48 in 39) also got out just 2 balls later. But, Chris Morris (25* in 8) came to bat and fired 3 sixes and 1 four while Udana (10* in 5) also hit 1 six as the duo took their team total to 171-6 in 20 overs.

RCB had set a target of 172 runs for KXIP. It was not a huge target but RCB had a good bowling attack to be able to defend it. On contrary, the opening duo of Kings, KL Rahul and Mayank Agarwal were looking all set to chase it down. They started off a bit slow in the first two overs but then smashed boundaries to gather 57 runs without any loss of wicket in the powerplay. 2 overs after the powerplay, Chahal dismissed Agarwal (45 in 25) at a score of 78 in 8 overs. Then came Chris Gayle, whom everyone was excited to see as the player was making his first appearance of IPL 2020. People had a lot of expectations from him as he is a natural hitter. Gayle started slow initially and at one point was at 6 runs in 14 balls.

However, then came Sundar’s over where he smashed two sixes to show who is the boss. After completing his half-century, he also pointed towards the sticker on his bat which had “THE BOSS” written on it. Both Rahul and Gayle were comfortable now and were hammering the RCB bowlers. However, they still managed to take the match to the last ball where they required 1 run in 1 ball. Gayle (53 in 45) had got run out as Rahul (61* in 49) tried to take a single on the second last ball. However, unfortunately, Gayle couldn’t make it to the striker’s end. Nicholas Pooran (6* in 6) came in and smashed a 6 to seal the 2nd victory for Punjab. KXIP had only won their second game of the season yet but what was more shocking was that both their victories were against RCB.

KL Rahul is adjudged the Man of the Match for his match-winning knock of 61* off 49 deliveries.#Dream11IPL pic.twitter.com/a1EjhDkwGf

The Kings XI Punjab skipper KL Rahul was honored with the Man of the Match award for his brilliant innings of 61* in 49. His team had won with 8 wickets. Even though their spot on the points table did not change, Rahul was happy with the cricket his team had played. He said that they were definitely sad about not winning games. However, he’s sure that now his team will be boosted by this win. Now, KXIP will be facing MI in their next match whereas RCB will be up against RR.