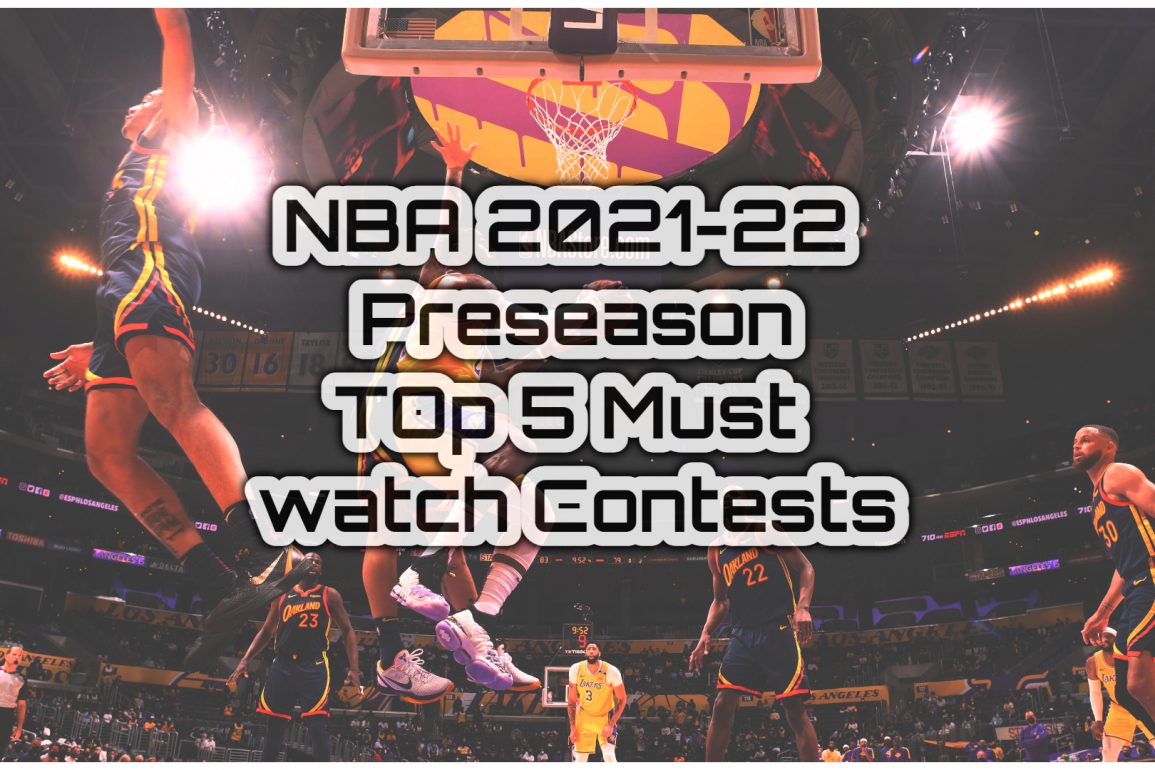 This article will focus on the top 5 must-watch contests of NBA Preseason 2021-22. After so much bad news in the last few months finally, there is a piece of good news for all the Basketball fans as well as sports enthusiasts. NBA 2021-22 Preseason has already started and will continue till mid-October. Just like any other sport, Baseball also has got some popular rivalries. On one hand, while history will be looking to repeat itself as Milwaukee Bucks will start their campaign as the defending champions. On the other hand, the remaining teams will leave no stone unturned in order to win.

It will be too early to predict the teams for the playoffs but the one thing that is evident is that some of the greatest rivalries will reignite in the upcoming week. Preseason games are played in order for NBA players to get in shape for the regular season. The score isn’t important at all but winning the games definitely boosts the confidence for the regular season.  As the preseason opener on October 3, 2021, will feature Brooklyn Nets and LA Lakers you must be wondering about the forthcoming big clashes not to miss. Well, you do not have to worry at all because we have compiled 5 of the must-watch contests to look forward to this preseason.

A strong side like theirs has got all the firepower that it takes to turn things into their favor. But some of you might not agree with the previous statement. Well, the Bucks are a balanced side, at least on the papers. However contrary to what the papers may suggest nothing can change the fact that Milwaukee Bucks have started their 2021-22 preseason campaign with a defeat. On Wednesday amidst the fire alarm issue, Grizzles swept the points and handed them their first defeat of the season. Bucks will be looking forward to returning to their winning ways as soon as possible. On the other hand, Jazz has also entered into the preseason with a loss against Dallas Mavericks. It is going to be an exciting contest on October 13, 2021.

The night of October 7 will without doubt prove to be a cherry on the cake for the NBA fans. This preseason action at the Toyota Center has got all the valid reasons to make its place on the 4th of the matchups this season to look forward to. While Miami Heat has started the preseason with a terrific win, Hudson Rockets are no less. Both the teams will be entering into this game heads up and pumped with confidence. I can not even take sides right now!. So may the best win.

When the two Eastern Coast rivals will meet on October 15, entertainment is guaranteed. Little Caesars Arena will witness an exciting contest once again as both the teams will be looking forward to not only dominate their rivalry but also gaining momentum before the regular season. While Detroit Pistons are coming off a 115-105 win over the Spurs, Philadelphia 76ers are yet to win a game. However, before this big clash 76ers have a chance to win their next game against the Raptors and boost up their morale.

It has been a fantastic start to the campaign for the Brooklyn Nets. Along with winning the preseason opener, they have also warned the other teams that how strong their side is. This contest has to be in the second position of the 5 must-watch contests this preseason. Contrary to the current form of both sides Milwaukee Bucks has dominated the head-to-head contest against the Nets. We are all aware of what happened when Bucks and Brooklyn Nets last time met each other at the NBA 2020-21 Eastern Conference semi-finals. This will be the perfect opportunity for the Brooklyn Nets to let their rivals taste the defeat.

Definitely, this one is going to be one of the most thrilling matchups in their preseason. Regardless of how highly we fans regard the LA Lakers, they have not lived up to the hype this season. Lakers will be entering this game with back-to-back two defeats. On comparing head to head, surprisingly the records favor Lakers. But talking about the current form Warriors will for sure clinch off a win on Saturday at the Chase Center.