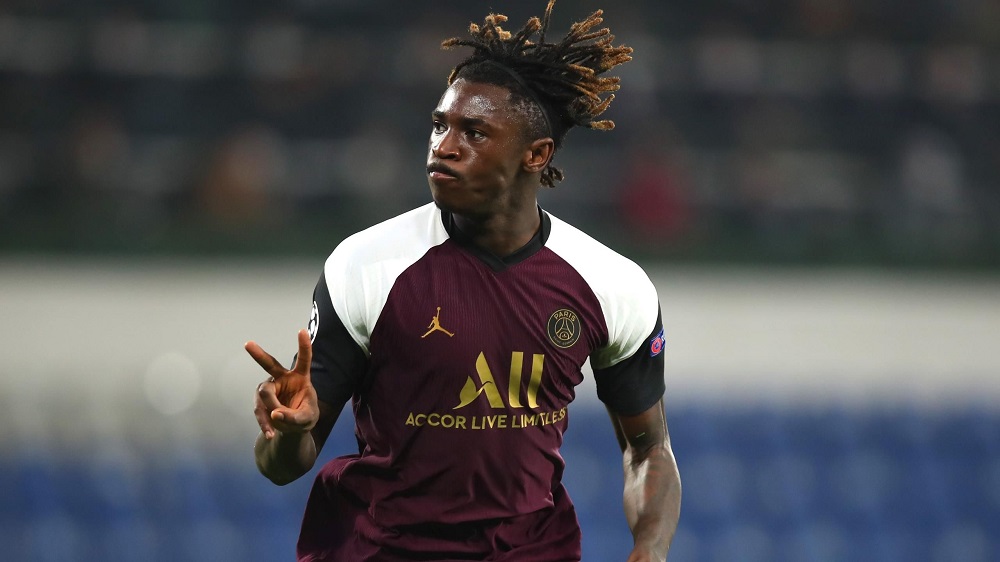 Moise Kean celebrates after the second goal for PSG in the UEFA Champions League clash against Istanbul.

The UEFA Champions League 2020/21 season has started and as always fans are enjoying it. The matchday one was pretty exciting and we got to see some great clashes. We got to see Real Madrid lose against Shakhtar Donetsk by 3-2 whereas Manchester United won 3 points against Paris Saint-Germain. After matchday 1 got complete, the fans could not wait for matchday 2. The matchday 2 also had some great fixtures with some unexpected results like Real Madrid’s tie against Borussia Monchengladbach and the tie game between Ajax and Atalanta. These matches were played on the first day of matchday 2.

As a result, now it was time for the second day which had some exciting fixtures like Barcelona vs Juventus, Manchester United vs RB Leipzig, and more. One of these fixtures was Paris Saint-Germain vs Istanbul Basaksehir. Both the teams had lost their first match. Paris lost against Manchester United by a goal and Istanbul lost against RB Leipzig by 2 goals. It was very important for both the teams to win this game. Let us see what happened in this clash.

Istanbul Basaksehir had a great run last season winning the Super Lig but were not at their best form this season. Right now, they are at the 11th position in their national league. Paris Saint-Germain, on the other hand, who started the season very poorly are now the table toppers in Ligue 1. Istanbul did not make any major changes in their squad. On the contrary, Navas, Kimpembe, Florenzi, and Kurzawa who were absent in their last game against Dijon were included in the starting 11 for PSG. PSG is pretty comfortable playing against Turkish teams and it was going to be a challenge for Istanbul.

The match kicked off and the pressure from Istanbul surprised PSG. Normally, PSG dominates the game by keeping most of the possession but the pressure from Istanbul was too much for them to handle. Istanbul was showing some great attacking skills while PSG struggled to defend. PSG had to face another shock when Neymar had to be replaced due to an injury risk when he had hardly played for 25 minutes. After many scares from Istanbul, the score was still 0-0 at halftime.

PSG looked much better in the second half maybe because most of the Istanbul players were exhausted after applying so much pressure in the first half itself. The Ligue1 toppers scored their first goal 19 minutes into the second half. Mbappe, who took the cross from a corner was converted by the youngster Moise Kean. Kean scored again in the 79th minute from a left-foot volley. Like this, Kean was the star of the match for PSG. Istanbul looked very weak in the second half but still gave out a good fight. After this win, PSG is now second in their group i.e. Group H behind Manchester United.