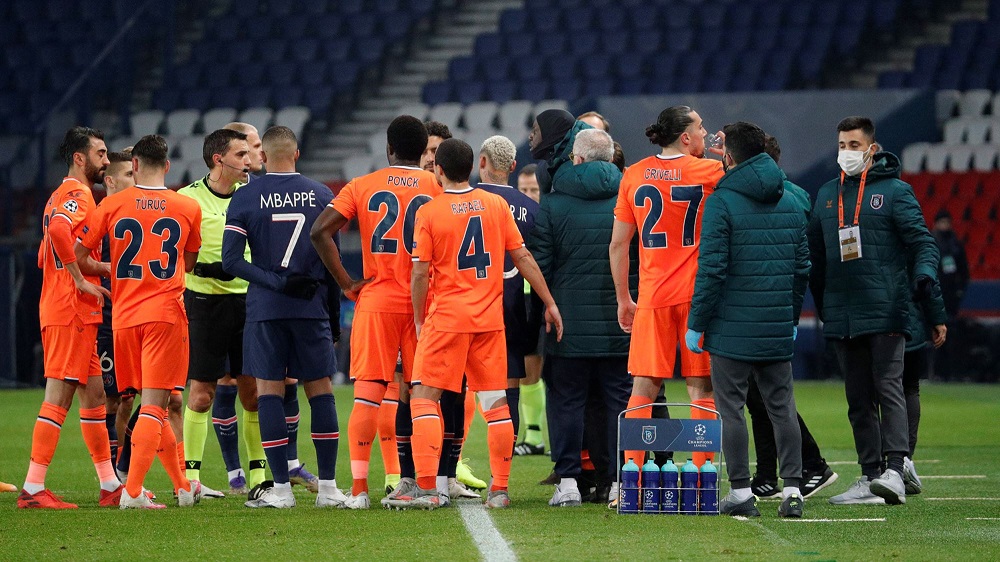 The match between PSG and Istanbul Basaksehir was suspended after a huge controversy regarding racist remarks from a UEFA Official.

The UEFA Champions League is the biggest football league in the world where top football clubs from all over the world compete. However, it has also been a part of many controversies in the footballing world. Every year, some rule is added to maintain the sanity and spirit of the sport. But, one of the major issues that the sport has always been facing is racism. At some point of the other, players or fans have disrespected each other on basis of race, color, etc. Recently, we got to see something similar to this in the last group stage match of Group H between PSG and Istanbul Basaksehir. It was a do-or-die match for Paris-Saint Germain if Manchester United would win against RB Leipzig.

As a result, they had to give all they could if they wanted to go through to the next round. On the other hand, Istanbul Basaksehir was already knocked out and therefore they didn’t have much to lose. However, when the match started, something really unexpected happened. You’ll be shocked to know that the match was suspended following the incident. So, let us see what exactly happened during the match.

What happened in the match between PSG and Istanbul Basaksehir?

The match kicked off and PSG were looking in a really good form. However, what happened in the 13th minute left everyone stunned. The assistant coach of Istanbul Basaksehir and ex-Cameroon striker Pierre Webo was asked to be sent off by the 4th official in the 13th minute of the game. However, during that the 4th referee Sebastian Coltescu described Webo as “Negro” or “the Black One” (in Romanian) when the match referee asked who should be punished. Soon after that, Webo and the players of Istanbul Basaksehir lashed out at the referee and the 4th official. They accused the latter of racist remarks. The 4th referee said that he didn’t mean the words in a racist manner. In fact, he immediately apologized for his words and tried to get the match going.

✊🏻✊🏿 NO TO RACISM | #Respect pic.twitter.com/Ic1BzfANoi

However, the Istanbul Basaksehir players walked out in support of their assistant coach. Soon even the PSG players followed them as they took a stand against racism. Now, the UEFA committee has appointed an Ethics and Disciplinary Inspector to look into the match. Talking about the match, it has been postponed to 22 hours later and will now be played at 11:25 PM IST/ 18:55 CET. The lineups will be the same and the match will continue from the 14th minute when it was stopped. Even though PSG are already through to the UCL Round of 16 after Manchester United’s 3-2 defeat to RB Leipzig, the French giants now have a chance to finish at the top of the points table.