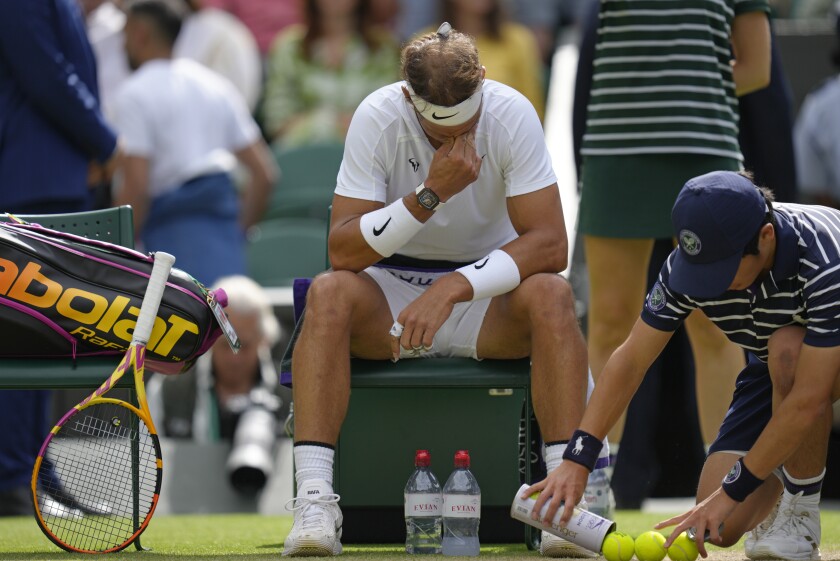 Rafael Nadal Withdraws From Wimbledon Due To Injury: What Next Time For Him?

Rafael Nadal withdraws from Wimbledon due to an injury he got in his quarter-final clash against Fritz. He sustained an abdominal injury in the second set when he already lost the first. He came back to win the second carrying that injury. It was tough, we could all see it in his face, and credit to Fritz for pushing the limits. Nadal even stopped his famous grunt due to the abdominal pain he was having. Anyhow, he managed to take the game to the fifth and final set where he won in the tie-break. It is really heartbreaking for Nadal’s fans to see him withdrawing from the tournament. His hopes of winning a career grand slam are now over.

What is interesting is to see when he comes back now. He already did a press conference informing us about his withdrawal from Wimbledon. It was a hard sight to digest but we need to respect his decision of retiring. He said, “They told me I need to retire from the match”. “Well, I tried. For me was tough to retire in the middle of the match. Not easy even if I had that idea for such a long time.” “But on the other hand, I did it a couple of times in my tennis career. Is something that I hate to do it. So I just keep trying, and that’s it.” “Now I’m worried honestly. That’s part of the business, too. Even if I did a lot of effort to play this event in all ways, abdominal is not a thing that comes to play on grass. Can happen on any surface.”

Rafa added, “Tomorrow I going to have some more tests, but difficult to know (whether he will play on Friday,”. “It’s obvious that I am not the kind of player that I didn’t have a lot of things in my tennis career, so I am used to having things, and I am used to playing with problems. Knowing that, when I feel something like I felt, that is because something is not going the proper way in the abdominal, no? “Let’s see. It’s obvious that today is nothing new. I had these feelings for a couple of days. Without a doubt, today was the worst day. Have been a significant increase in pain and limitation. And that’s it, yeah.” “I managed to win that match. Let’s see what’s going on tomorrow.” “The decision if I play at the end – all the decisions – are the player’s decision, but at the same time, I need to know different opinions, and I need to check everything the proper way.” “That is even something more important than win Wimbledon, that is the health. Let’s see how this is going tomorrow.”

What Is Next For Rafa?

Now out of the tournament, Rafael Nadal should not look to speed up the recovery process as he has to participate in the US Open. It would be amazing if Nadal comes in completely healthy for the last grand slam of the year. He still has a chance to win three out of the total four grand slams in the year.