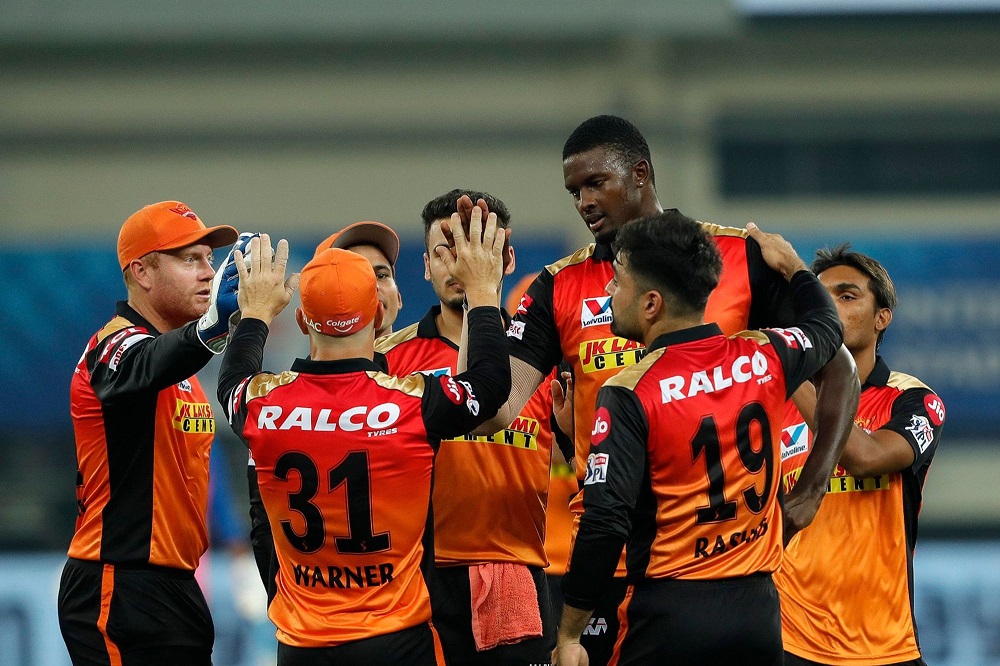 IPL 2020 has really just been like the year 2020. It has been weird, thrilling, and completely unexpected. Chennai Super Kings, one of the most successful teams have been at the bottom of the points table. On the other hand, Delhi Capitals and Royal Challengers Bangalore have been in their best form as they have maintained their positions in the points table. However, the maiden champions Rajasthan Royals and Sunrisers Hyderabad have not been in a good form this season. They have not been in a really bad form but they also haven’t performed up to the mark. Sunrisers Hyderabad were in the 7th position whereas Rajasthan Royals were just above them in the 6th position. Now, both the teams were going to battle it out against each other as they were looking to move up on the points table.

Sunrisers Hyderabad had won the toss and their skipper David Warner opted to bowl first. They did not get a great start as the RR openers Robin Uthappa and Ben Stokes were pounding the SRH bowlers. However, in the 4th over, Uthappa (19 in 13) got out. After that came Sanju Samson to the crease and built a good partnership of 56 runs with Stokes on the other end. Then, in the 12th and 13th over, Samson (36 in 26) and Stokes (30 in 32) got out respectively. As a result, Jos Buttler and Steven Smith came to the crease. However, Buttler (9 in 12) soon lost his wicket to Vijay Shankar in the 16th over.

But, even after losing Buttler’s wicket RR did not step back and kept smashing the SRH bowlers. In the 19th over, Smith (19 in 15) got out as Jason Holder bowled a brilliant yorker. On the very next ball, Riyan Parag (20 in 12) also got out. After that, Jofra Archer (16 in 7) and Rahul Tewatia (2 in 3) finished the innings for Rajasthan Royals. Sunrisers Hyderabad restricted RR to a total of 154-6 in their 20-over innings. Now, SRH needed 155 runs in 120 balls. It was definitely an easy target but RR had a good bowling line-up that could defend it.

David Warner and Jonny Bairstow came to open the innings for SRH as always. However, in the first over itself, Jofra Archer dismissed Warner (4 in 4). After that, just when Bairstow (10 in 7) had started hitting big, Archer once again struck to dismiss him. After that, all the hopes were rested on Manish Pandey and Vijay Shankar and the duo did not disappoint at all. They started off slow but Pandey soon started going for the big shots. He smashed the RR bowlers to chase down the target with Vijay Shankar in just 18.1 overs. Pandey had scored a brilliant 83* in just 47 balls whereas Shankar scored 52* in 51.

A well deserved Man of the Match award for @im_manishpandey for his match-winning knock of 83*.#Dream11IPL pic.twitter.com/O8kznbEjy7

Manish Pandey won the Man of the Match award for his excellent innings that led his team to victory. He had not performed quite well in the previous matches but he had proven that the skipper had not been choosing him just like that. The bowling attack also did an excellent job as they restricted the likes of big batsmen like Samson, Smith, and Buttler to a total of just 154-6. Now, SRH had climbed up to the 5th position whereas RR was now in the 7th position in the points table. Both the teams are tied at 8 points but SRH has a better net run-rate. They will now be looking forward to win all of their next matches if they want to qualify for the playoffs. SRH will be facing KXIP whereas RR will be up against MI.