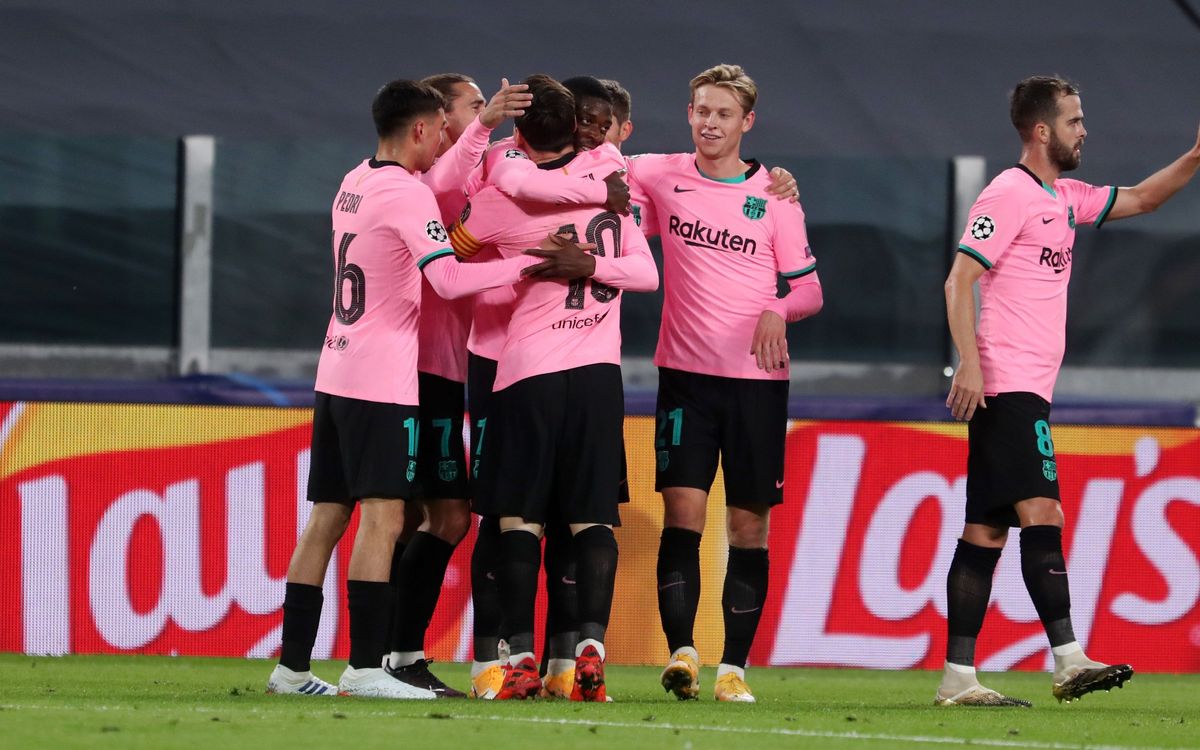 Barcelona Celebrating in the huddle after the victory

FC Barcelona played their second Champions League fixture against Juventus on their home ground, the Allianz Stadium. The much-awaited fixture attracted many eyeballs around the world as the tie promised to be exciting and edge-of-the-seat entertainment. Cristiano Ronaldo and Lionel Messi’s face-off upped the excitement even more, especially since the two greats were meeting the first time since 2018. However, Cristiano Ronaldo did not play the much-awaited tie because he tested covid-19 positive. Although denting the enthusiasm a little, the tie still had the world’s attention to see the 2015 finalists clash in the group stage. The match ended 2-0 in favor of FC Barcelona. Ousmane Dembele and Lionel Messi scoring the only goals of the tie.

Is Ronald Koeman Giving Barcelona A Direction for Revival?

Last season’s Champions League saw the worst ever defeat for FC Barcelona. The German giants Bayern Munich humiliated the Spanish team as they put 8 past the net with Barcelona, only managing to score 2. The shocking result fast-tracked the sacking of Quique Setien (then Barcelona coach) and demanded a complete overhaul of the club’s structure. Ronald Koeman was immediately put at the driving seat for the upcoming season, and since his arrival, Barcelona has looked a new side with an ambition that seemed all but lost. Koeman’s strategy is not exactly traditional for the club, but nobody can deny that it works. Playing a 4-2-3-1 diamond, Koeman ensured that players like Frenkie De Jong and Antoine Greizman are utilized optimally. This tactical change results are prominent as more youngsters are getting a chance to start for the club.

Even though the club is playing well in the Champions League, it is not doing so in Spain. Barcelona is currently placed 12th in La Liga with 7 points; 6 behind their league rivals Real Madrid who has 13. This discrepancy in Europe and their domestic league certainly divides the opinion that fans have about Ronald Koeman. However, With Koeman giving more youngsters a chance in the current Barcelona team, many believe that the club is moving in the right direction.

What Should We Expect From The Next Leg of The Draw?

Many football fans all over the world immediately shielded Juventus’s defeat. The shield? Who else but Cristiano Ronaldo. Even though the faith is not unwarranted, will the number seven’s presence be the saving grace for Juventus in the next leg? Yes, that’s right. Cristiano Ronaldo tested negative for covid-19 after a re-test. So, his presence is confirmed for the second leg of the draw for which the Old Lady of Turin will visit the Nou Camp, a familiar place for Cristiano Ronaldo. Saying that we are excited will be an understatement at best. However, with Koeman’s improved Barcelona, we believe that the fixture might produce the same result as the first leg. Barcelona is looking aggressive in their attack and sturdier in their defense. The defense was the weakest part of the team last season, which Bayern exploited with so much pleasure.

No matter the result, one thing is certain, the world is eager is to watch the two greatest players to ever grace the beautiful game go against each other. Who wouldn’t love the Champions League?