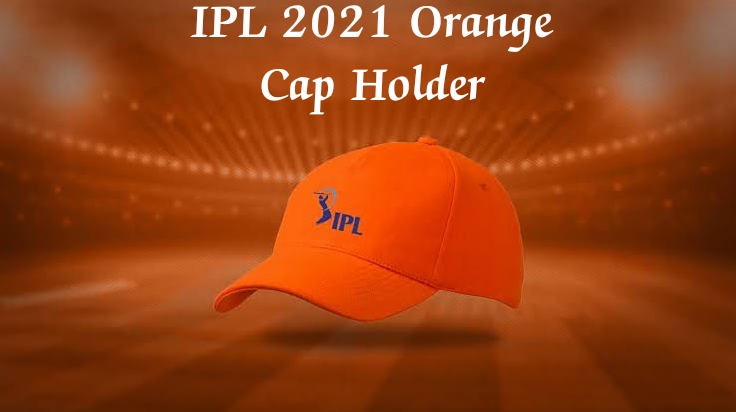 The following article is about the Orange Cap of the Indian Premier League 2021 and the person who is currently holding on to it. The Indian Premier League has always encouraged the players with several individual awards. Apart from winning the trophy, there are several individual awards which are given both at the end of a match, as well as the end of the tournament. Out of them, the two of the most important award are the Orange Cap, and the Purple Cap. People may get confused as to why the two awards are being called these colorful caps. After reading the article, they will have all of their doubts cleared.

The Orange Cap is given to the player who has scored the most number of runs in the whole tournament. Each year a new Orange Cap is introduced. So in simpler words, a batsman has to score tons of runs to earn the orange cap. Now coming to Purple Cap, it is the award that is given to the bowler who has taken the highest number of wickets. One award is based on the batsmen, and the other is on bowlers. In this article we are only going to talk about the Orange Cap, so for now let us focus on the Orange. Most people already know its history and who is holding it, but for those of you who do not know, follow the article. So without further delay, let us see every detail on the Orange Cap.

For people who are watching an IPL match on television, it is fairly easy for them to know the highest run scorers of the tournament as the statistics keep showing up. But for people going to the stadium, it becomes difficult for them to know. Moreover, until the tournament ends, the award cannot be given. So it make it easier for everyone, the Orange Cap was introduced. The highest run-scorer will be given a bright orange cap, which has to be worn during the match. In a single season, the Orange Cap changes heads several times. It is better to heads instead of hands as the cap is worn on the head. The team logo of the player will be embedded on the cap.

The last person holding the cap will be given the award. Now coming to the past Orange Cap holders, there have been several great ones who held onto that cap. The first-ever Orange Cap award was won by Shaun Marsh in 2008. He used to play for Kings XI Punjab. There have only been two players in the history of IPL to win the Orange Cap more than once. They are Chris Gayle, in 2011 and 2012, and David Warner, in 2017 and 2019. The highest individual score by an Orange Cap holder in a season is 973. It was scored by Virat Kohli in 2016. Sachin Tendulkar, one of the all-time best batsmen, won the award in 2010.

Currently, the Orange Cap is held by KL Rahul. Even though Punjab Kings did not qualify for the playoffs, he showed true sportsmanship through his bat. With great knocks, KL Rahul managed to lead the list of the highest run scorers. If he wins this year, then he will win it for the second time. KL Rahul has been constantly performing well, but his team could not pick up the same pace. The second on the list is Ruturaj Gaikwad. KL Rahul has 626 runs and Ruturaj Gaikwad has 603. Ruturaj Gaikwad still has a match left. He can overtake KL Rahul. The third position is held by Shikhar Dhawan with 551. He will also have a chance of winning the award, as Delhi Capitals will play against KKR, and if they win, they will face CSK. So he may or may not have two matches left.

It is the first time that all the top three leading run-scorers of the Indian Premier League are Indians. Out of all the editions of IPL, only three Indians have managed to win the award. If any three of them win, it will be the fourth time. The expectations will be that an Indian wins the award. All of them have been in top forms and are not ready to back down. They let their bat speak for them, and it looks like the bowlers are facing difficulty in silencing their bats. KL Rahul has just played 13 matches. It shows his determination. On the other hand, Ruturaj Gaikwad has played more matches, but if he wins, he will be the youngest player to win the award at just 24 years old. All will be answered on 15th October 2021.