Barcelona vs PSG: Messi vs Neymar- All You Need To Know About The UEFA Champions League RO16 Draws 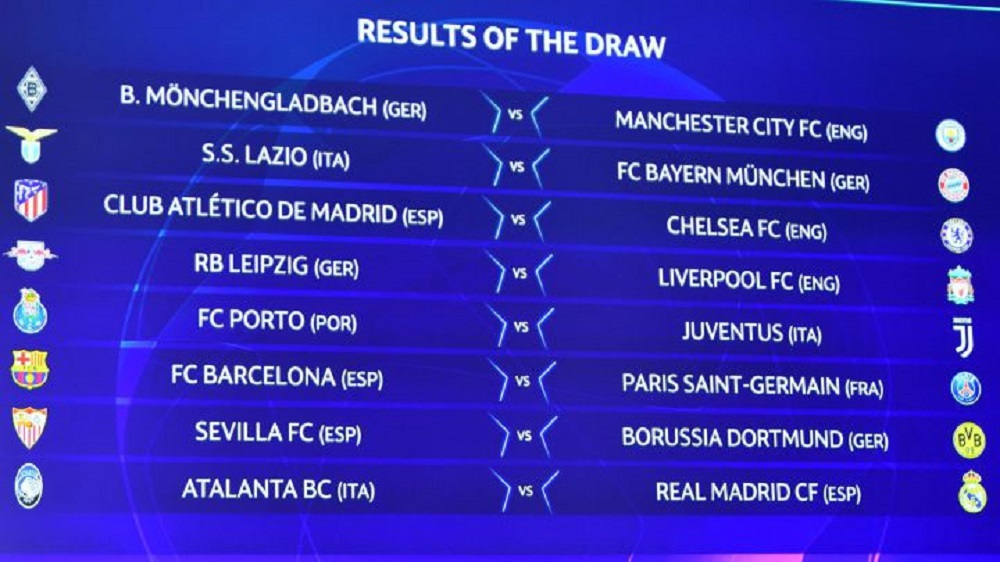 The UEFA Champions League Round of 16 draws are out and here's all you need to know.

The UEFA Champions League group stage ended on 10th December with teams from various leagues qualifying for the next round. Bayern Munich, Juventus, Chelsea, Manchester City, Real Madrid, Paris-Saint Germain (PSG), Liverpool, and Borussia Dortmund finished as the table-toppers in their respective groups. On the other hand, Barcelona, Sevilla, Lazio, Atletico Madrid, Borussia Monchengladbach, FC Porto, Atalanta, and RB Leipzig finished at the 2nd position. Anyhow, it was now time for the UEFA Champions League draws of the Round of 16. The teams could not face the same team from their group and also any club from the same league as them. As a result, it was going to be interesting to see which teams would be drawn against each other.

UEFA Champions League Round of 16 Draws:

Porto (Portugal) vs Juventus (Italy) on 17th February at Estadio do Dragao.

Which tie are you most excited for? 🤩#UCLdraw | #UCL pic.twitter.com/M6AqMYTygN

Leipzig (Germany) vs Liverpool (England) on 10th March at Anfield.

Who’ll win the clash between PSG and Barcelona? Messi or Neymar?

So, the stage is all set as the draws are out. The teams will surely be preparing for the Round of 16 matches from now itself. Barcelona facing PSG is going to be one of the most anticipated matches. Lionel Messi will be going up against his former Barcelona teammate Neymar Jr. The last time, PSG faced Barcelona, Neymar and Messi knocked PSG out with the most memorable comeback of 6-1 (after a 4-0 defeat). However, they parted ways later on as Neymar Jr. joined PSG for a record-breaking fee. On the other hand, FC Porto will be locking heads with Juventus. As a result, Cristiano Ronaldo will be up against his former Real Madrid and Portugal teammate Pepe. Consequently, the Round of 16 matches will surely be thrilling and definitely worth watching.