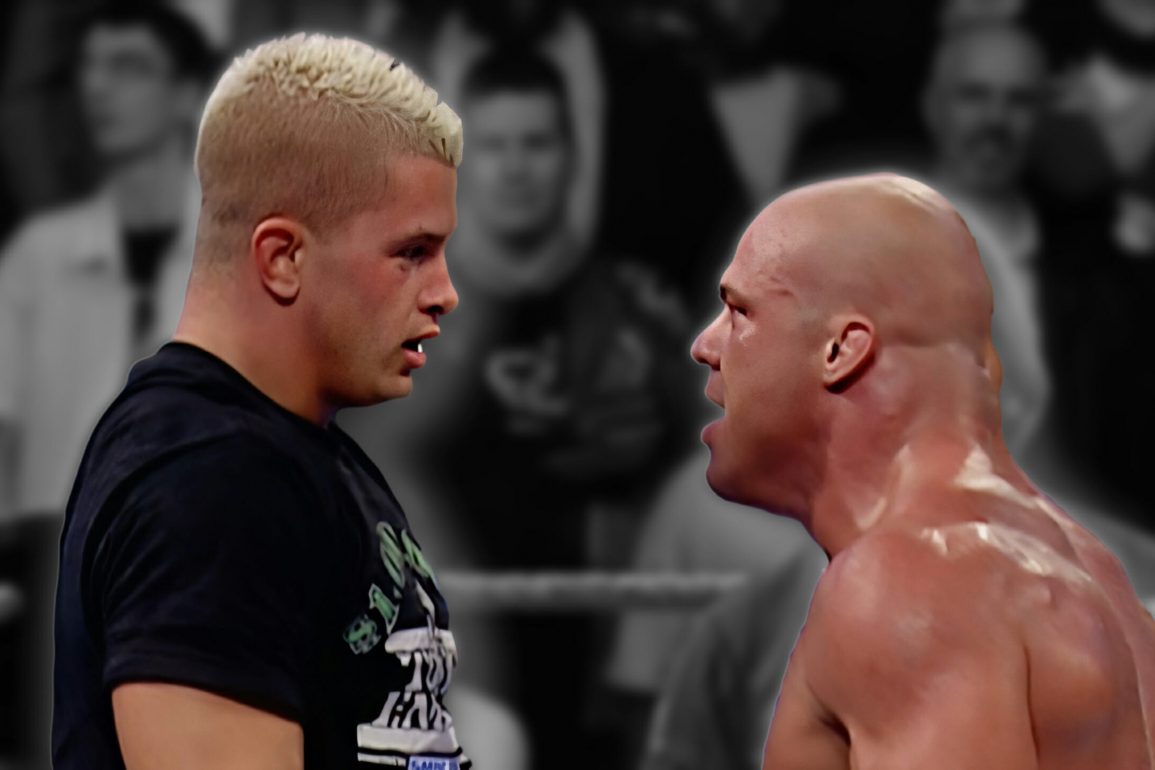 The following article is about the unscripted moment of WWE when Daniel Puder tried to break Kurt Angle’s arm. The best moments of WWE came mostly in the Attitude Era. In the late 1990s and early 2000s, that was the time when the most celebrated superstars wrestled. Starting from The Rock, Ric Flair, Stone Cold Steve Austin, The Undertaker, etc., all were part of the Attitude Era. One of the greatest superstars to grace the World Wrestling Entertainment ring was Kurt Angle. He is an Olympic Gold Medalist before signing for WWE. That is enough for people to adore him. During his tenure, he was involved in several interesting matches.

Not only interesting matches but there were also several interesting storylines of which he was a part. Out of all the things that happened during his career, the most unexpected thing that happened was when he faced Daniel Puder in an unscripted encounter. For the fans, it was nothing more than a fight but several inside controversies took place after that incident. A lot of questions were asked. Daniel Puder had a short tenure, but it most the most eye-catching moment of his WWE career. So without delay, let us get right into the topic and see what the entire ruckus was about.

Who Is Daniel Puder?

Daniel Puder is the former winner of WWE Tough Enough season 4. Even though he was not selected for Tough Enough season 3, he managed to win the next season. Daniel Puder knew mixed martial arts, and with that experience, he joined WWE. He was never a mainstream WWE name. Due to his unexpected actions, he had a short-lived WWE career. In the Royal Rumble 2005 match, Daniel Puder entered third. It was just after the fourth season of Tough Enough. Even after hurting Kurt Angle, he was not the one to apologize, and the cold war continued backstage. Due to cost-cutting measures, he was left out of WWE, and after that, he tried his luck in MMA, too. He is the founder of My Life My Power. People can check his Twitter for further details.

Further Details Of The Incident

During the incident, Jimmy Koderas, along with Charles Robinson, were the referees. They shared their experience on the ‘It’s My House’ podcast. According to them, the incident goes something like this, Kurt Angle called Daniel and started to demean him. At this, all the referees and officials exchanged their glances with each other, but could not figure out what to do. Jimmy Koderas was questioned about his decision, but there was nothing he could have done. After the fight broke out, Daniel Puder held Kurt Angle in the Kimura Lock. Jimmy Koderas was no MMA expert, but looking at the lock, he could understand that it was not a normal one, and Kurt might be hurt. Kurt Angle would never tap out. He might lose his hand, but he was not the one to give up.

Jimmy looked at Al Snow was thinking in his mind how to make Kurt Angle avoid such an embarrassing moment. Being an Olympic Gold Medallist would be hard. Suddenly Jimmy that Kurt Angle landed on top of Daniel Puder. His instinct said him to start the count. Jimmy was always very professional, he could have just counted one as Daniel was an amateur at that time, but he did not. He did the full count till three, and Kurt Angle won. Even though Daniel lifted his shoulder after the second count, Jimmy still counted to three to save Kurt Angle. After that, there was an off-air promo between the wrestlers, and Kurt verbally abused Daniel asked him to leave the ring. Daniel was respectful and left. Seeing this Jimmy quietly left the ring and on his way he saw, Gerry Brisco. Gerry gave him a thumbs up.