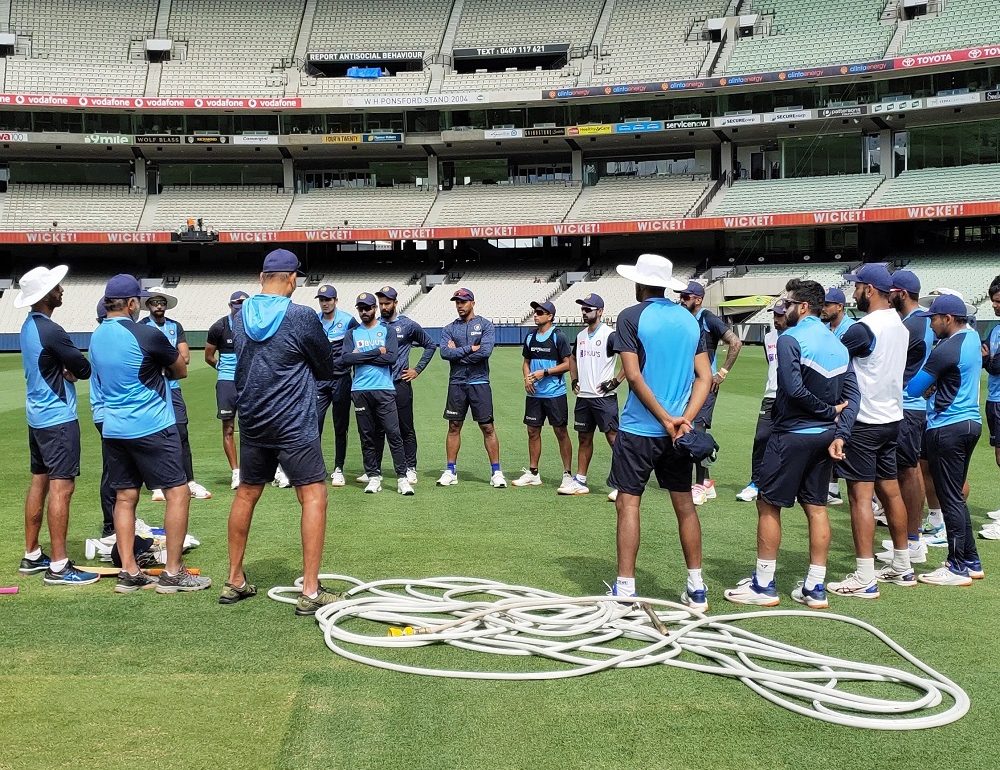 A still from the team meeting before the 2nd test match at the MCG.

The Boxing Day Test between India and Australia is all set to begin on 26th November, 2020. It will be played at the Melbourne Cricket Ground (MCG). However, there are few changes that have been made in the Indian team. They lost to Australia in the most humiliating manner on Day 3 of the first Test. They were only able to put up a total of 36 on the scoreboard after taking a good lead of 53 runs from the first innings. Consequently, they lost the match by 8 wickets on Day 3 itself. After that, their skipper Virat Kohli left for India as he had taken a paternity leave. He wanted to be with his wife before the birth of his first child. So, it was quite prominent there would be a few changes made in the team.

Changes made for Boxing Day Test: India vs Australia:

Now that the Indian skipper Virat Kohli is not a part of the team, the vice-captain Ajinkya Rahane will be taking over the captaincy. It will be interesting to see how the team performs under the guidance of Rahane. Before this, Rahane had captained the team in the two practice matches against Australia. That was prior to the beginning of the Vodafone Test Series. Rahane is known to be a bowler’s captain and many bowlers have testified for this themselves. He communicates quite often with his bowlers regarding how they want the field and their overs. So, it will be quite entertaining according to the lineup that the Indian team has presented.

If you had watched the previous match, then you must’ve noticed that the management has changed 4 players for the upcoming test. Shubman Gill will be replacing his 2017-18 U-19 WC compatriot Prithvi Shaw. Rishabh Pant will be coming in for the much experienced Wriddhiman Saha as the wicket-keeper. On the other hand, Ravindra Jadeja is coming in for Virat Kohli whereas Mohammed Siraj will be replacing Mohammed Shami. Shami had fractured his arm while batting in the 2nd innings for India.

ALERT🚨: #TeamIndia for 2nd Test of the Border-Gavaskar Trophy against Australia to be played in MCG from tomorrow announced. #AUSvIND pic.twitter.com/4g1q3DJmm7

The playing 11 seems really fresh. Mohammed Siraj and Shubman Gill will be making their debut for India in Test format. Both the players had impressed the management with their performance in the practice matches for India A and India. So, it will be interesting to see how India fares with the fresh players. The addition of Ravindra Jadeja in place of Virat Kohli was quite bogus. Everyone was expecting that KL Rahul would be a part of the playing 11 this time. However, it seems like Rahane is backing Hanuma Vihari. Anyhow, brace yourselves as the Boxing Day test is all set to begin tomorrow at the Melbourne Cricket Ground (MCG). Until then, let us know your thoughts about India’s playing 11 against Australia for the 2nd Test match.