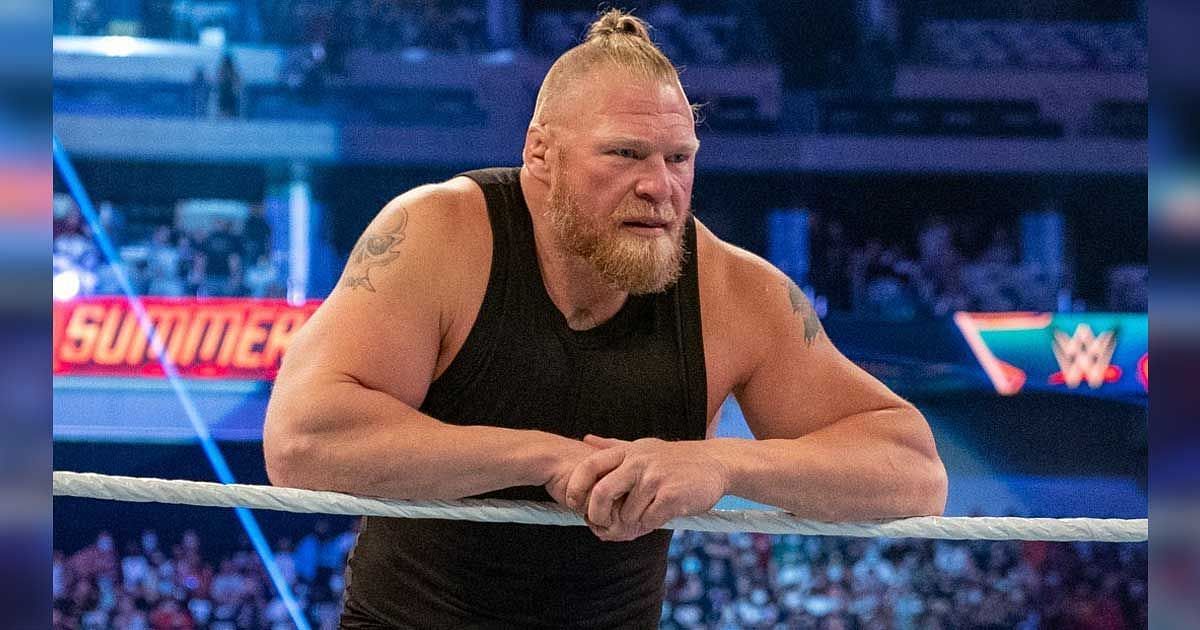 The following article is about WWE Fine Brock Lesnar 1 Million USD and every detail surrounding the event. Currently, in WWE, the ‘The Rock Month’ is going on. This is a tribute to ‘The Most Electrifying Man In All Of Entertain Sports’, as this month marks his 25th anniversary with WWE. The Rock is a fan favorite wrestler. Apart from him, several superstars helped WWE reach the pinnacle of the entertainment business in the late 1990s. During those times, there was so much storyline, and several influential people made their cameos. But as time passed, the quality started to deteriorate.

Most of you will disagree with this fact, but it is the truth. In the last decade, there have been several controversies surrounding WWE. The beginning was marked by the ‘Pipe Bomb’ incident. Even in this decade, it looks like WWE is yet to overcome the controversies. In the last pay-per-view of WWE, Crown Jewel, Brock Lesnar lost to Roman Reigns, and on his return to SmackDown, he wreaked havoc. Most of you will say that it is a common thing for him, but this time it is a bit different. This time, he put his hands somewhere where he should not have put them. This has led to a lot of controversy and heavy penalties on him. Continue reading the article to know more about the incident.

Due to his questionable actions on Friday Night SmackDown, WWE has fined Brock Lesnar 1 Million US Dollars. What questionable actions do you ask? Well, after he was defeated by Roman Reigns, after the interference from the Usos. Brock Lesnar was angry. From the moment he set his foot on SmackDown, he started to beat everyone. This is a natural phenomenon of the ‘Beast Incarnate’, but he crossed his lines when he F5-ed Adam Pierce twice in the ring. For those of you who do not know, Adam Pierce is one of the higher officials of World Wrestling Entertainment. Before being fined, Brock Lesnar was suspended indefinitely from WWE.

What Happened on SmackDown?

The first SmackDown episode after Crown Jewel was held on 22nd October 2021. Roman Reigns, having defeated Brock Lesnar, started to trash talk about him on the show. Brock was present backstage, and he was not ready to take any of that. He went to the ring and confronted Roman Reigns. Roman Reigns tried to hit him with his WWE Universal Championship belt but was unsuccessful as Brock Lesnar dodged it. After that, Brock clotheslined Reigns twice, before throwing him out of the ring. Brock went and grabbed Reigns and threw him against the WWE steel steps.

After the brutal assault, Brock Lesnar picked up Roman Reigns to F5 him through the announcer table. But the Usos saved the day. The WWE SmackDown Tag Team Champions helped Roman Reigns get away but in the process got in the Beast’s way. Brock Lesnar beat them ruthlessly and send both of them over to the timekeeper’s area. Referees tried to calm him but instead got beaten by him. Seeing this, Adam Pierce sends several wrestlers to stop Brock Lesnar. But it was no use. After beating everyone, he held the Universal Title up in the air. Seeing no other way, Adam Pierce had to enter the ring to stop all the chaos.

Also Read: Stone Cold Steve Austin vs Brock Lesnar: Will it Ever Happen?

Adam Pierce’s Take On The Incident

After entering the ring, the first thing Adam Pierce did was to put an end to all the devastation. He felt that there was enough damage done and everyone in the WWE universe, including the wrestlers and the fans, was quite scared. At the end of his speech, he suspended Brock Lesnar indefinitely. This was not well taken by Brock Lesnar. He F5-ed the WWE official, and before making his exit, he even taunted him. It had only been a few days since Brock Lesnar made his WWE return. This was a short-lived reincarnation for the beast. Brock Lesnar is yet to reply to this matter. Tell us what you think about this incident.