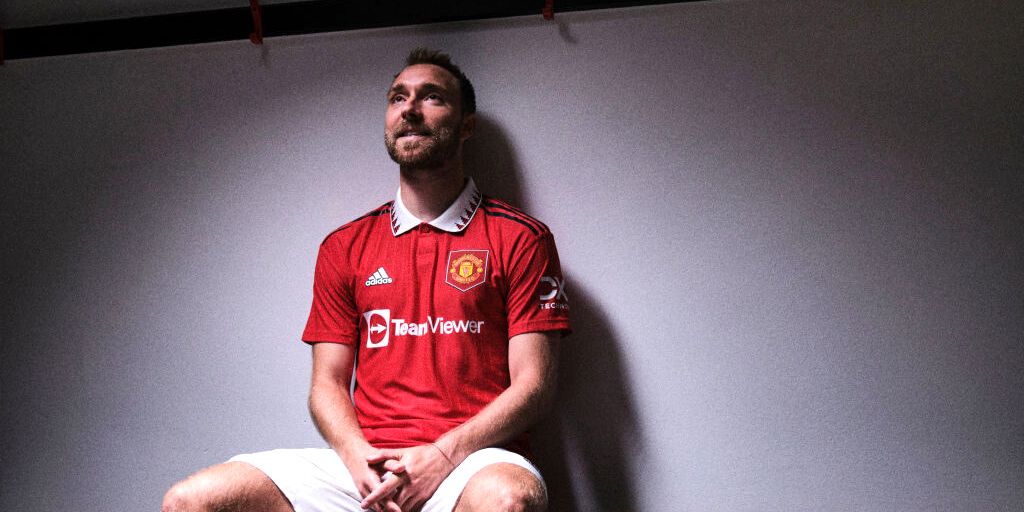 The Christian Eriksen to Manchester United announcement video begins with a monologue, “To be top again…”. It pretty much sums up the gravity of this move for the club and the player. The Danish midfielder signs on a 3-year deal as a free agent. His arrival at Old Trafford brings a high degree of optimism with it. Besides, he is expected to be a vital player under new coach Erik ten Hag.

Eriksen suffered a cardiac arrest last year while playing for his nation at the 2020 Euros. It stunned the millions who had tuned in to the match between Denmark and Finland at the Parken Stadium. Following the incident, he was given an ICD, which he continues to carry to this day. However, it forced him out of his then club, Inter Milan, having failed to meet the rules of Serie A.

He later joined Brentford in Jan 2022, after six months away from the game. His displays for the Bees were instrumental in keeping them in the England top-flight. Notably, Eriksen previously played in the PL during his six and a half years at Spurs. There he developed into one of the finest midfielders in the world. The United fans will hope to see similar feats from him at Old Trafford. Besides, he also had a three-year spell at Ajax at the start of his career.

When ten Hag took over as United boss, he was bound to move on from the counter-attacking style of play. A much more possession-based football identity was on the agenda. For that matter, he will need players of the ilk of the Dane. Players who are comfortable with the ball at their feet and ready for a teammate’s pass at any moment. Christian Eriksen brings that and much more to Manchester United. Besides, his wealth of experience and work ethic will come in handy for any team in the world. At 30, he has plenty of football left in his tank. He aims to make it to the Denmark team at the 2022 World Cup in Qatar.

With the playmaker on board, ten Hag can now plan various ways to slot him into the side. Apart from playing him as a sole number 10, a midfield pairing with Bruno up top is also on the menu. He has the tactical know-how and ability to fulfil both of these roles. However, the team will need a world-class CDM for the latter option. Nonetheless, Eriksen did play as a deep-lying playmaker during his time at Inter. Nevertheless, despite all the adversities, he remains too good to be on the bench for any stretch of time. The United fans must get excited to see an artist able enough for the canvas called the Theatre of Dreams.

Also Read: ‘They don’t’ See-See: Too Much Cricket In a Calendar Year!