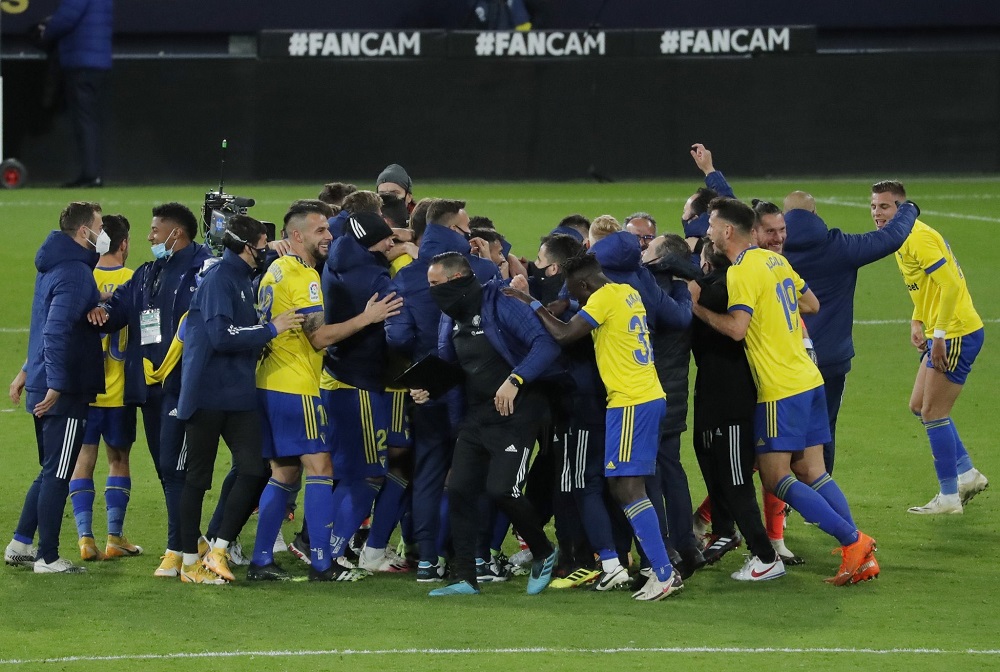 A still of the players and support staff of Cadiz celebrating after they beat FC Barcelona at home.

La Liga returned to action after a tiresome midweek action in the UEFA Champions League. It was time for Barcelona to lock heads with Cadiz, the newly promoted team. Cadiz was in the 6th position whereas Barcelona was in the 7th position on the points table. Consequently, it was going to be a big game for both of them. Both were looking for their 5th win of the season. However, their record wasn’t looking good. Barcelona hadn’t won their last 3 away games whereas Cadiz hadn’t won a single game this season at their home. So, it was surely going to be an interesting game. With a win in this match, either of them could climb to the Top 5. So, let us see what happened during the match.

The match began and Barcelona kicked off on the referee’s whistle. They started off with their usual possession game and were quite successful in doing so. However, they are unable to attack much as Cadiz were playing really good defensively. The Cadiz coach A. Cervera had already said in the pre-match interview that his team will not be looking for possession. Instead, they’ll be dominating the Catalans with their pace and on counter-attacks. So, that is exactly what they were doing and as a result, in the 8th minute, Cadiz scored their first goal. A good corner from Cadiz saw Mingueza clearing the ball into his own goal. However, Ter Stegen made a brilliant save to keep it out of the goal. But, Alvaro Gimenez was sitting at the post and smashed the ball into the back of the net. Consequently, Cadiz was now leading by 1-0.

The match continued and now the Blaugranas were looking desperate for goals. In fact, just 5 minutes later, Griezmann had a good chance to make it 1-1. Dest kept in a good cross but the Frenchman missed the ball by a few inches. Coutinho tried to tap that cross in but hit the ball far above the post. So, the match continued as the Catalans were attacking and Cadiz were only defending. They were creating only a few chances but were unable to convert those. As a result, the score at the end of halftime was 1-0 in Cadiz’s favor.

The second half began as Cadiz kicked off now and they were only looking to maintain their 1-goal lead. On the other hand, Barcelona was looking forward to attack and score an equalizer. Therefore, Koeman decided to send in Pedri and Dembele as a substitute for Mingueza and Coutinho. Finally, the hard work paid off as in the 57th minute, the Catalans got their equalizer after an own goal from Pedro Alcala. Messi passed the ball to Jordi Alba who was trying to cross it in. However, the ball hit Alcala’s foot and took a deflection as it went past Ledesma straight into the back of the net. As a result, Barcelona had now tied with Cadiz and was looking forward to get some more goals.

However, unfortunately, they weren’t the ones who got the second goal. It was Cadiz who soon gained back the lead as Alvaro Negredo came on as a super substitute for them. He came in as a replacement for Alvaro Gimenez. An error from Lenglet after Alba’s throw in proved to be expensive for the Catalans. The French center-back left the ball for Ter Stegen but Negredo dashed in to intercept and after tricking De Jong with a dummy, he tapped the ball in easily to make the score 2-1. After that, the Blaugranas tried all that they could but were unable to equalize.

As a result, they lost their 4th game of this season to maintain their 7th position in the points table. On the other hand, Cadiz climbed up to the 5th position as they now have 18 points from their 12 fixtures. Anyhow, Barcelona will now be up against Levante in their next fixture whereas Cadiz will be facing Celta Vigo.