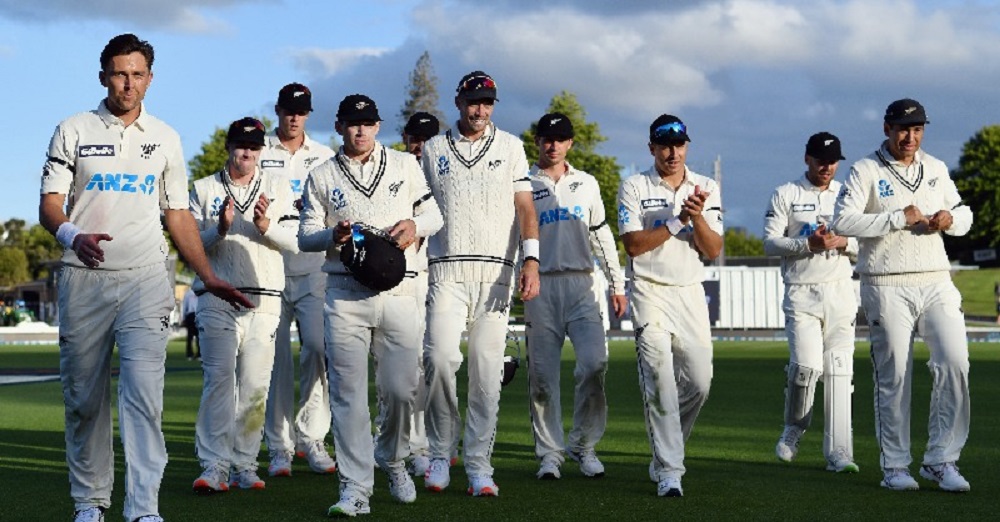 International cricket returned after quite a long time due to the ongoing pandemic. However, it didn’t take much time for the fans to get glued to their TVs for some entertainment. The fans were really happy as their favorite players made a return to play the sport they love. Since all the tours and series are now happening, many teams traveled across their borders for the series. One such tour is the West Indies tour of New Zealand. The series began with a practice match and the BlackCaps seemed to be in a brilliant form. They went on to win the T20I Series but failed to get a clean sweep. The organizers had to call off the last T20I due to rain. Consequently, it was now time for the Test series to begin. So, let us see what happened during the 1 test match.

The match began as West Indies won the toss and opted to bowl first. They wanted to restrict the hosts to a low total so they could make up with an easy chase. The visitors wanted to then put up a huge target in their first innings itself so that they could concentrate on getting the hosts all-out as soon as possible. As a result, Latham and Will Young opened the innings for New Zealand. However, West Indies was successful in creating pressure as in the 4th over itself they were able to get Young’s (5 in 11) wicket. Consequently, Kane Williamson, the New Zealand skipper came in at 3 himself. He settled in really well with Latham (86 in 184) and built a 154-run partnership until the 56th over when the latter got out. So, Ross Taylor came to the crease.

He chipped in a decent 68-ball 38 before getting out in the 80th over. As a result, Henry Nicholls (7 in 33) came in at 5 but failed to make an impact. He got out in the 90 over as New Zealand lost their 4th wicket. However, this didn’t affect Kane Williamson who was playing a brilliant knock. He was calm and was playing really well as he was defending his wicket and getting runs also. Anyhow, Tom Blundell came in at 6 to support from Williamson from the other end of the crease. However, soon in the 112th over, even he (Blundell- 14 in 63) got out. Then came Daryl Mitchell who scored 9 runs in 37 balls before getting out in the 126th over. By that time, Kane Williamson had already completed his double century to get New Zealand’s total to a 500+ score.

Finally, in the 142nd over, Williamson (251 in 412) lost his wicket to Alzarri Joseph. Anyhow, Jamieson (51* in 64) and Southee (11* in 10) finished off the first innings for New Zealand as they got their team’s total to 519-7. Williamson decided to declare the innings at that time because he knew this was a good total and he had faith in his bowlers that he could give a follow-on to the visitors.

West Indies began their first innings as K. Braithwaite and John Campbell opened for them. They got off to a good start but in the 27th over, Campbell lost his wicket to Southee. After that, the West Indies batting lineup just collapsed completely. They were getting out one after the other. The hosts had managed to get the visitors all-out at a total of just 138. Tim Southee was the star as he took 4 wickets. Apart from him, Jamieson and Wagner took 2 wickets whereas Boult only managed to get 1. Since, West Indies had failed to score even half the target set up by New Zealand in the first innings, the latter decided to go for a follow-on. So, it was time for the visitors to suit themselves for another innings. They now needed to chase 381 runs within 3 days if they wanted to win.

The visitors began their second innings and once again, Braithwaite and Campbell opened for them. However, this time they didn’t even manage to last till the 27th over. In fact, within 21.3 overs West Indies lost 6 wickets at a score of just 89 runs. However, then came Jermaine Blackwood as a boon for the visitors. He played a brilliant innings as he scored 104 runs off just 141 balls to get West Indies closer to the target. On the other hand, Alzarri Joseph also played a great knock as he chipped in 86 runs in just 125 balls before getting out in the 58th over. Soon after his dismissal, even Blackwood got out in the 59th over. After that, once again the visitors just collapsed. They got all out at a total of 247.

With this, New Zealand had won the first test match against West Indies by 134 runs and an innings. Kane Williamson became the Man of the Match for his outstanding knock of 251 runs in 412 balls. The hosts will now be looking forward to the 2nd test match that will be starting from 11th December. New Zealand will want to seal the series just like the T20I series but with a clean sweep this time. On the other hand, West Indies will look forward to getting a win at least in the last test match since they haven’t won a single match on their tour in New Zealand.