Barcelona Thrash Real Valladolid To Finally Win Away From Home 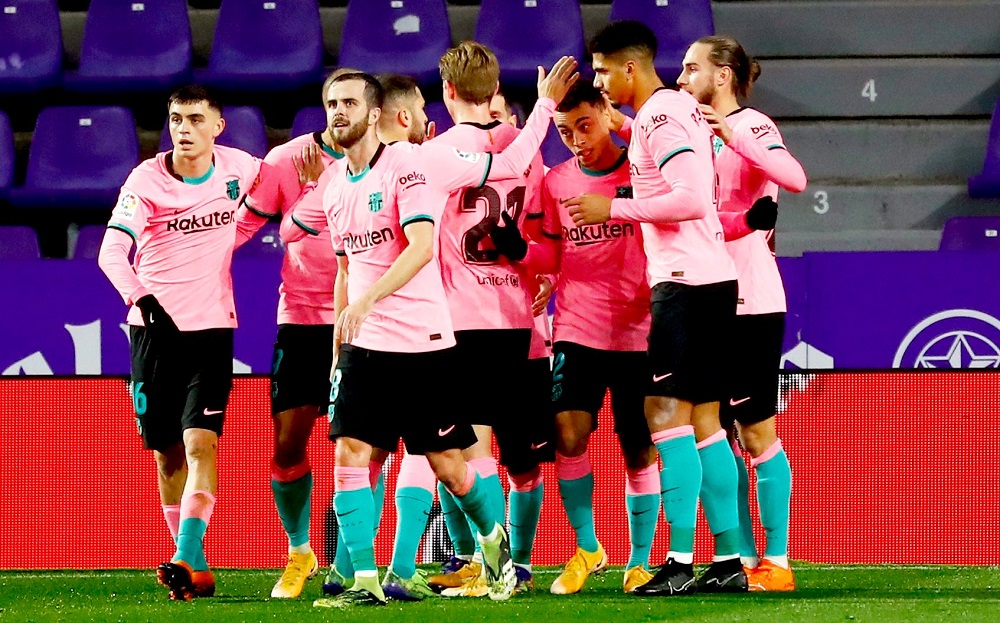 Barcelona thrashed Real Valladolid to finally win a game away from home since October.

Barcelona faced Real Valladolid in yet another interesting fixture in La Liga. It was a game away from home for the Catalans and it was surely not going to be easy. They had last won a game playing away on 1st October against Celta Vigo when they were reduced to 10 men after Clement Lenglet was sent off. Ever since then, they had not managed to bag the 3 points when not playing at the Camp Nou. Barcelona were currently in the 5th position as they had 21 points from their 13 games. On the other hand, Real Valladolid was in the 18th position in the relegation zone. They desperately needed a win if they wanted to get out of it. However, a win and the resultant 3 points were equally important for the Catalans.

The match began as Barcelona kicked off and the Catalans had planned to play their standard possession game. However, Real Valladolid was not going easy on them. From the beginning of the match, the Valladolid-based team was pressing highly. However, the Blaugranas didn’t seem to be bothered by this. They continued to play their game calmly without any pressure. As a result, in the 21st minute, they got their first goal of the match. Clement Lenglet scored it to break the deadlock. Messi kept in a beautiful ball inside the box and Lenglet made no mistake in putting it past Jordi Masip. As a result, the Catalans had earned themselves a much deserved early lead.

The match continued and Barcelona was completely ruthless. They were creating chances one after the other to get more goals. In the 35th minute, Martin Braithwaite scored an excellent tap-in goal after a brilliant assist from Dest. Messi dribbled from three players and passed the ball to Dest. The American right-back then kept in a good low cross to Braithwaite who converted the chance very easily. With that, the first half came to an end. The score was 2-0 in Barcelona’s favor.

The second half began and now Real Valladolid was looking hungry for goals. However, it was Barcelona who had another goal registered to their name. It was a record-breaking goal from their skipper Lionel Messi who scored his 644th goal for Barcelona. He collected the ball from Pedri outside the box and smashed it into the right side of the goal. That was that as it was the last goal of the match. Consequently, Barcelona won the match with a scoreline of 3-0. It was not only a really important win for Barcelona but another record set by Lionel Messi.

Messi had left Pele behind for the most number of goals scored for a single club. Pele had 643 and now Messi had 644 (and still counting). This is surely one of the most unachievable records and it’s really difficult to say that it will ever be broken again. Anyhow, with this win, Barcelona didn’t move up the points table but they managed to shorten the difference with Villareal and Real Sociedad who are just above them with 26 points. The Catalans now have 24 points as they’ve won 7 games from their 14 fixtures. Real Valladolid, on the other hand, maintained their position at the 18th place. Anyhow, Barcelona will now be facing Eibar at home in their next fixture whereas Real Valladolid will be up against Cadiz away from their home.