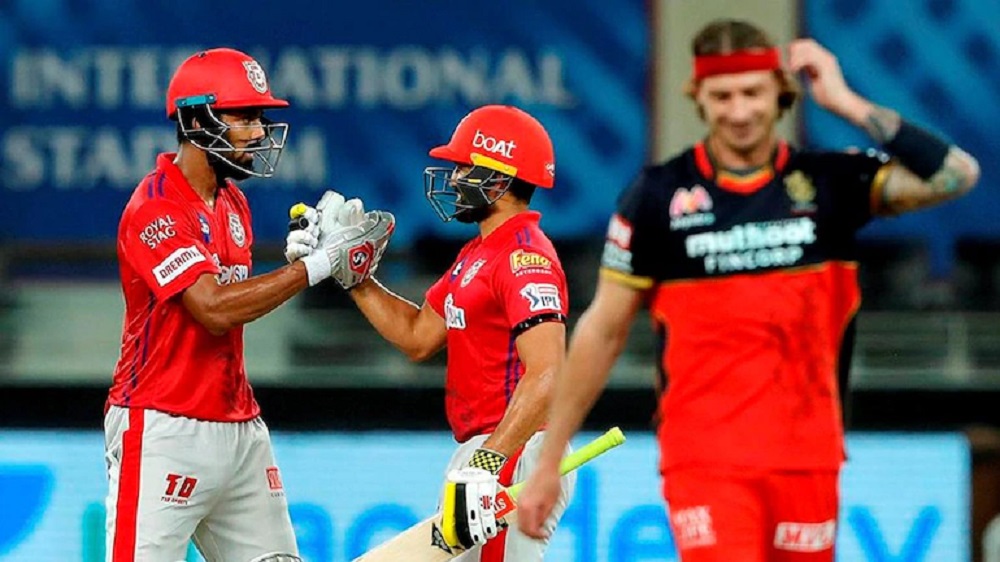 KL Rahul smashed Dale Steyn in his 19th over for 26 runs.

It was matchday 6 of IPL as Royal Challengers Bangalore and Kings XI Punjab braced themselves for a showdown. With excellent players in both the teams, the sides were ready to compete for the 2 points. Punjab had previously lost to Delhi Capitals whereas the Royal Challengers had defeated Sunrisers Hyderabad to clinch their first victory. Now, it was time for them to lock horns with each other in Dubai. The weird fact was that half of the players who were playing for KXIP had previously been a part of the RCB squad. So, it was definitely going to be an interesting match to watch.

The match began as RCB won the toss and chose to bowl first. It was a great pitch to bowl and the RCB skipper Kohli was looking forward to chasing an easy target. However, that was not on Punjab’s skipper KL Rahul’s mind. Rahul started playing big shots from the starting of the innings and bashed the RCB bowlers. However, in the 7th over Yuzvendra Chahal dismissed Rahul’s opening partner Mayank Agarwal (26 of 20). Pooran (17 of 18) and Maxwell (5 of 6) also got out in the 14th and 16th over respectively scoring fewer runs. But, that did not seem to affect Rahul as he scored a thrilling 132 off 69 balls in the 20-over innings. Moreover, Rahul smashed 26 runs in the 19th over to the South-African pacer Dale Steyn. It was a treat to watch for the fans’ eyes.

Now, KXIP had put up a target of 207 for RCB. However, the Bangalore based team got a rocky start as they lost 3 major wickets of Devdutt Padikal (1 of 2), Josh Philippe (0 of 3), and Virat Kohli (1 of 5) in the first 3 overs itself. However, Aaron Finch (20 of 21) and AB de Villiers (28 of 18) seemed to bring stability to the RCB innings but that did not last long. Both of them got dismissed in the 8th and 9th over respectively. After that, the team went crashing down as Washington Sundar (30 of 27) managed to get a few runs for the team on the scoreboard. The entire team of RCB got all out at a score of 109 within just 17 overs. This helped Kings XI Punjab with a massive increase in their net run-rate.

Who was awarded the Man of the Match award?

Kings XI Punjab put up an excellent display of their game from batting to bowling. KL Rahul was honored with the Man of the Match award for his wonderful innings of 132 in just 69 balls. He also created a record in the match as he became the fastest player to score 2000 runs in IPL. However, the skipper recognized the bowlers’ efforts as he appreciated their performance throughout the game. From picking early wickets to restricting the opponents to a low total, the bowlers did an amazing job. However, RCB was surely upset after the defeat. Their captain Kohli even admitted to his mistake of dropping KL Rahul two times in the match. But, he said that they will learn from their mistakes and come back stronger for their next match.