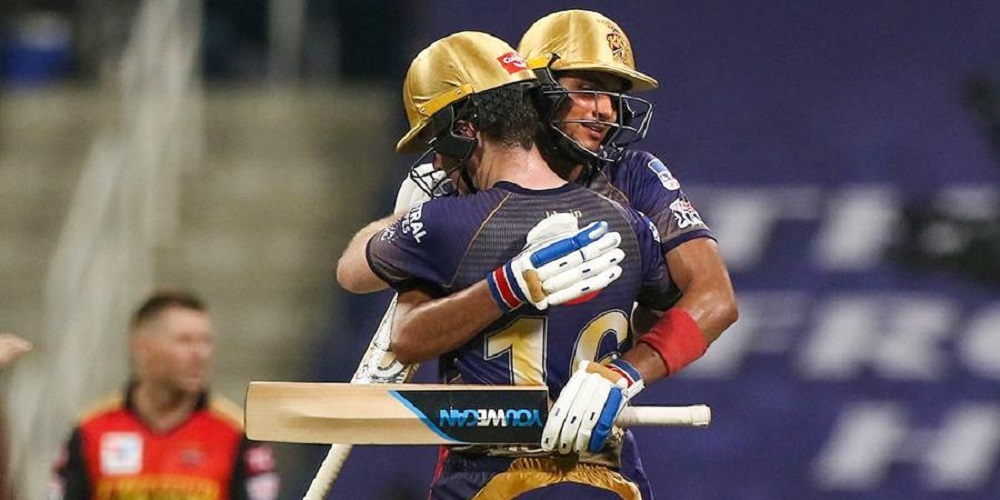 Eoin Morgan and Shubman Gill celebrate after winning the match.

IPL 2020 has been entertaining all of us and it was time for yet another brilliant match. Kolkata Knight Riders were going up against Sunrisers Hyderabad. It was the 8th match of the tournament and was definitely going to be interesting. After getting defeated in their first match, both the teams were looking for a win. KKR lost to MI by 49 runs after an excellent performance from skipper Rohit Sharma. On the other hand, SRH had lost to RCB with a close margin of just 10 runs. Consequently, both the teams were on the bottom of the points table and were looking forward to get the 2 points from a win.

Sunrisers Hyderabad chose to bat first as David Warner won the toss. The opening pair- Jonny Bairstow and David Warner came to the crease. However, Bairstow (5 off 10) got out early in the 4th over itself. But, Manish Pandey came in at 3 and handled the innings quite well for the Hyderabad side. He smashed 51 in just 38 balls as Warner hit 36 off 30 balls alongside him. Warner got dismissed in the 10th over after which came Wriddhiman Saha (30 off 31) who managed to have a good partnership with Pandey. At the end of the first innings, SRH’s total was 142-4. Now, KKR had an easy target but needed to play a smart and defensive game against the brilliant bowlers of SRH.

Shubman Gill and Narine opened the innings for the KKR side. Even though Narine got dismissed in the 2nd over, Gill did not lose his confidence. He played maturely as he got singles, doubles, and even boundaries when needed. To replace Narine came Nitish Rana who played aggressive from the start as he hit 26 in just 13 balls after getting out in the 5th over. Then came the skipper, Dinesh Kartik who got ducked in the 7th over itself. After Kartik’s dismissal, Eoin Morgan came to the crease. Morgan played a wonderful innings as he got 42 off just 29 balls. However, the star of the match was Shubman Gill who scored a versatile 70 in 62 balls. On the last ball of the 18th over Morgan finished the game with a boundary.

What did we learn from the match between KKR and SRH?

KKR won the game easily as Shubman Gill played a smart game, both defensively and aggressively. He was even awarded the Man of the Match for his brilliant knock. However, we got to see Eoin Morgan and Pat Cummins back in form. The fans were disappointed with their performance in the previous match but they showed their worth against SRH. Another player that impressed everyone was Shivam Mavi who showed great statistics once again. Now, SRH has lost two matches and will surely be looking ahead to get a win against Delhi Capitals on 29th September. On contrary, KKR will be looking to get yet another win against Rajasthan Royals on 30th September.